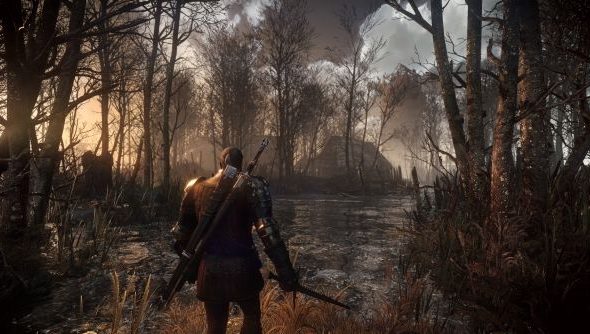 Our Fraser’s covered the heavy atmosphere and undeniable good looks of CD Projekt RED’s opus in his Witcher 3 review in progress. But in some quarters, the RPG’s wide-open gorgeousness has been overshadowed by an arguable downgrade from the game shown at the VGX Game Awards two years ago.

“We don’t feel good about it,” said CD Projekt co-founder Marcin Iwinski, “[If] you play it and you are not fine, we’ll do our best to make it up. But if you didn’t play it and you’re trolling: think twice please.”

The VGX trailer shows a Witcher 3 even denser in its detail and layered with visual effects not quite matched in the finished game. Theories have emerged about compromises made for the RPG’s multi-platform release, and some players feel misled.

“If you’re looking at the development process,” Iwinski told Eurogamer, “we do a certain build for a tradeshow and you pack it, it works, it looks amazing. And you are extremely far away from completing the game.

“Then you put it in the open-world, regardless of the platform, and it’s like ‘oh shit, it doesn’t really work’. We’ve already showed it, now we have to make it work. And then we try to make it work on a huge scale. This is the nature of games development.”

The VGX trailer was assembled from captured PC footage – but plenty has been altered since. CD Projekt switched renderers to an alternative that looked nicer across the whole world, at all times of the day-night cycle. A data-streaming system couldn’t take all that cantering. The studio toned down texture sizes in a trade-off to retain their “handmade” design. And dramatic smoke and fire effects were sacrificed for the good of the game as a whole.

As for the consoles? Iwinski says graphics could probably have been pushed further if CD Projekt had developed solely for the PC – but then none of the game’s development would have made financial sense. The Witcher 3 would have been “unaffordable”.

The RPG has gained plenty since 2013 – its sheer scope, for one thing, and the uniformly stable framerate Fraser praised in his review. But Iwinski wonders now whether CD Projekt should have shown that footage at VGX.

“We didn’t know that it wasn’t going to work, so it’s not a lie or a bad will – that’s why we didn’t comment actively,” he said. “We don’t agree there is a downgrade but it’s our opinion, and gamers’ feeling can be different.

“If they made their purchasing decision based on the 2013 materials, I’m deeply sorry for that, and we are discussing how we can make it up to them because that’s not fair.”

Some compensation is on its way: a huge patch incorporating improvements to graphics and their settings will be coming in the next week, and CD Projekt plan to allow editing of .ini files to push values like vegetation density, sharpening and draw distance beyond the game’s official bounds.

In the meantime, check our post on The Witcher 3 crashes and bugs for fixes to its driver issues. Are you bothered about the bits that differ from the build shown two years ago?