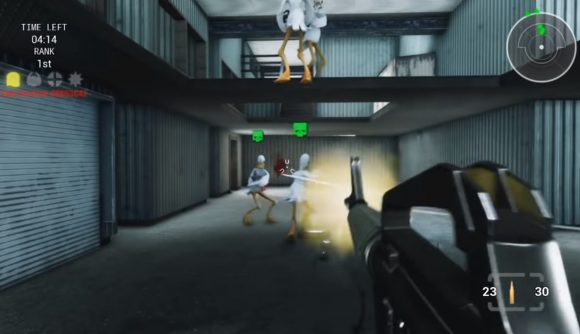 It’s been a long eight years for the team behind TimeSplitters Rewind, the fangame based on the cult FPS games, but the latest update shows just how much progress has been made on the expansive project.

Focusing primarily on modes, the 30-minute video runs through the selection menus while giving snippets of gameplay and general status reports on where everything’s at design wise. All of the challenges from the first TimeSplitters will be playable, as well as a number of others that combine aspects from all three games. The challenges are all split across multiple different categories, where, like what was a singular heist, have been expanded into their own mode that has multiple map-types. In a demo of Flock Around the Dock, the narrator explains the feel and balance is still in development. “Getting to 100 in this time-frame is really tough,” he explains. “This has been a big sign for us there’s still some work left in balancing the game, and really nailing the feel of the original trilogy.”

Arcade Custom has greater server support, so you can play online or off with all the standard variables TimeSplitters was known for. The weapon selection and bot roster is still a work-in-progress, but the menu screens and options have seen vast improvement this year. The team faces two recurring hurdles: bringing assets and material from the first game, which came out in 2,000, to 2020, and simple manpower. Included in the video is an open invitation for anyone interested in contribution, particularly in the areas of art and design, to reach out.

Where this focused on gameplay, the last update in January centered on character models. Though it’s a shame the action-adventure game won’t make the twentieth anniversary of the series, consistent updates with tangible progress are positive signs.

You can watch the full half-hour update below:

TimeSplitters was developed by Free Radical Design, a cohort of veteran develoeprs who cut their teeth on Goldeneye 007 and Perfect Dark, It and its two sequels are beloved games of the PlayStation 2-era.