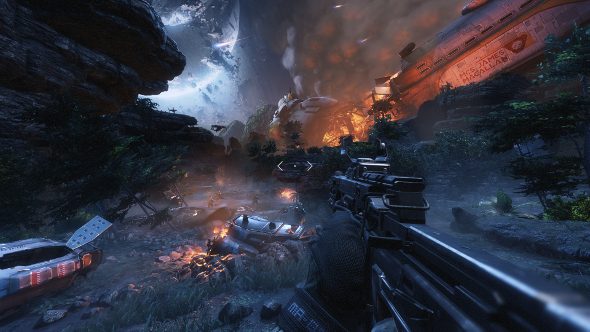 Titanfall 2 released today, the sci-fi sequel to Respawn’s robot shooter wall running as fast as it can, trying not to get caught in the crossfire of a Battlefield 1 and Call of Duty: Infinite Warfare shootout. The decision to release at this time, it turns out, was not negotiable, so Respawn had no choice but to duke it out with two of the industry’s heavyweight FPS franchises, one of which shares the same publisher as Titanfall 2.

Will any of this year’s big shooters get into our list of the best FPS games?

Within the space of three weeks, these shooters are all setting their sites on the same audience – those looking to to drop strangers online with the squeeze of a trigger or the click of a left mouse button. EA previously said they weren’t worried about releasing Battlefield 1 and Titanfall 2 so close together, as the settings and gameplay of both games are distinct.

However, Titanfall 2 is certainly in direct competition with this year’s spacebound, double-jumping Call of Duty and, with all three games releasing so close together, surely many will only be able to afford to purchase one.

You would think that staggering the releases would have led to more sales for each. Battlefield has always gone toe-to-toe with COD – and this might be the year it actually wins – but it seems strange to drop Titanfall 2 right in the middle of that, unless, of course, it’s being used as a tool to sap sales from COD and make that Battlefield 1 sales win even more likely.

During a recent review event, PlayStation Lifestyle asked producer Drew McCoy about the release date decision. “I actually don’t know where the decision came from,” McCoy says. “I just know it was locked in a long time ago and there was no changing it.

“I’m not really worried about it. We tried not to [worry] really… When you care about what other games are doing, when they’re releasing, [you worry]. At the end of the day, we’re releasing a game that we’re happy with, and we enjoy playing, that we’re proud of. As long as we’re doing that, I think we’re gonna find an audience. It doesn’t really matter when it comes out. A good game gets noticed.”

Having played Titanfall 2’s single-player to completion and a fair bit of the multiplayer, I hope McCoy is right. It’s a damn good shooter and it would be a shame to see it fail because of a release date. Check out our Titanfall 2 PC port review to see how it fares on Origin.