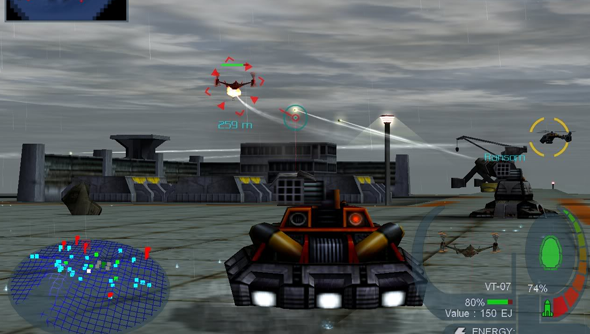 This week Square Enix has put out a call for developers to pitch games set in the Anachronox, Gex, or Fear Effect universes and last week Atari revealed they’re rebooting Asteroids as a survival game set on the moon. It seems every publisher’s looking through their back catalogue for a game series to reboot.

Question is, what series do you want to see brought back from the dead?

Hostile Waters is one of my favourite games of all time. Released back in 2001, it was a wonderful blend of real-time strategy and third-person combat. You commanded a futuristic aircraft carrier which could build tanks, aircraft, harvesters, anything you needed in the fight against the cabal of war criminals threatening Earth.

You could direct all your units on the battlefield from a top-down commander’s view and with a double-click of the mouse you could hop into any of your pilots’ brain and take control of the vehicle. One moment you’d be constructing a new tank on the carrier, choosing its weapon loadout and what special equipment to install, and the next you’d be driving that tank into the enemy base.

On top of that, it had a story written by Warren Ellis, Tom Baker (off of that Doctor Who) voiced the narrator, and had some ace menu music.

Unfortunately, Hostile Waters’ developer, Rage Software, sank into bankruptcy in 2003 and all hope of a sequel went with it. Bohemia Interactive remade Carrier Command, the series Hostile Waters was based on, but the new Carrier Command was just awful. I’d love to see another developer try and continue the Hostile Waters series on modern machines. And, this time, for the love of God, include multiplayer.

So, over to you: what series would you like rebooted and why?