Want to get better with Total War: Three Kingdoms’ diplomacy tools? War doesn’t just take place on the battlefield. The negotiation table is an equally important front in any conflict, a fact that has been apparent Total War developer Creative Assembly since the beginning. With Three Kingdoms, however, Creative Assembly has crafted the most robust and sprawling diplomacy system in the series’ history. The tendrils of diplomacy reach out to nearly every other aspect of Three Kingdoms. It’s here that you’ll do your best Littlefinger impression and work behind the scenes to bend the war in your favor.

Tactical combat is still at the core of the Three Kingdoms experience, but players who fancy themselves experts at statecraft are going to find more than enough to coerce and manipulate their way to victory. In fact, the diplomacy system is nearly overwhelming at first glance, but click around enough and you’ll find it’s surprisingly intuitive. Creative Assembly has included some quality of life features that make navigating the diplomatic web easier than you might expect.

Below, we’ve broken down how Total War: Three Kingdoms diplomacy works. This is by no means an exhaustive diplomacy guide, but it should provide enough information to get you started with the overhauled systems.

Opening up the diplomacy menu presents you with a basic suite of categories, such as ‘war & peace,’ ‘trade & marriage,’ and ‘diplomatic treaties.’ The diplomatic actions available to you depend on your faction leader’s current court rank. For instance, Cao Cao begins the game at the rank of noble, and thus doesn’t have access to roughly half of all diplomatic actions. As the campaign goes on, you’ll find that your toolset expands along with your faction’s land holdings and influence. So don’t be alarmed if the full suite of options aren’t open to you.

One of the most basic functions of diplomacy is the ability to engage in trade with other factions or vassals. Trade has been reworked for Three Kingdoms, and now allows for haggling. Each item offered up in a trade negotiation comes with a numerical value attached to it, dependent on the faction leader’s personality traits. If you can present items resulting in a higher value than what you’re asking from the other party, the trade is a go. 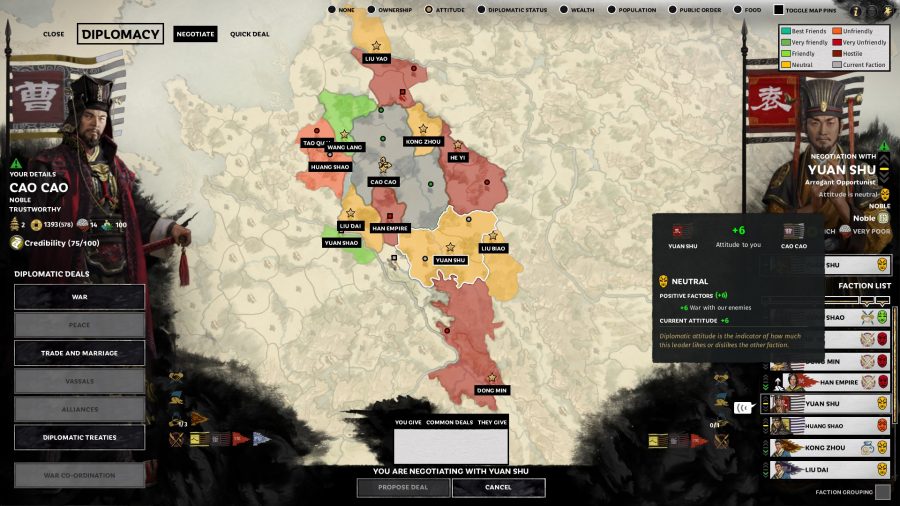 Doing the math, you’re still sitting at a -1 in total for the trade, meaning you’ll need to sweeten the pot just a tiny bit more before Ma agrees. You can reduce the number of supplies you’re asking for, up the amount of money you’re willing to pay, or even add something else to the deal, such as an ancillary item of some kind. It’s an elegant system that comes with a great deal of flexibility and the potential for some very creative trades.

One of the most useful tools when it comes to trade is the “make it work” button. If you just can’t seem to strike a deal with Ma for those precious military supplies, you can click the button and your side of the trade will auto-fill with items that he’s more likely to accept. It’s an incredibly useful tool that makes even trades a breeze.

In most cases, the most valuable commodity with which you can barter are entire regions. If you find yourself lacking allies in a war and you control several provinces, you can often convince other factions to take up arms in your name by offering them one of your commandaries. It’s hard to refuse a shiny new tract of land, and this has the added bonus of reducing the amount of upkeep you must pay each turn.

There are two types of alliances in Three Kingdoms: military alliances and coalitions. They differ in many ways, but both require a savvy diplomatic mind to properly leverage.

Military alliances are formal pacts, agreements that, whatever the cost, you and the other party have each other’s backs. In order to participate in an alliance of this type, all involved warlords must at least have the rank of Marquis. The idea of ‘shared defense’ is central here, in that what affects one faction affects the other. Members of an alliance are duty-bound to participate in wars together, which can be beneficial for several obvious reasons. However, break your oath of allegiance and your faction leader will be seen as treacherous, not just by the faction you betrayed, but by all factions.

If military alliances are a bit too binding for your taste, give a coalition a try. It’s a looser agreement that does not obligate you to participate in other members’ wars. It can be reassuring to know that you won’t necessarily be punished for ignoring a call for help, but remember that it goes both ways; don’t be surprised when Yuan Shu, who is known for being power hungry, betrays you at the most inopportune time.

A big part of Total War: Three Kingdoms diplomacy is watching coalitions form and dissolve. Seeing which ones become central to your campaign is an important part of emerging victorious. In many cases, keeping up to date on alliances can improve your chances of diplomatic success. Three Kingdoms makes this easy by including a ‘group by faction’ button in the diplomacy menu that lets you see who is allied with whom at a glance. 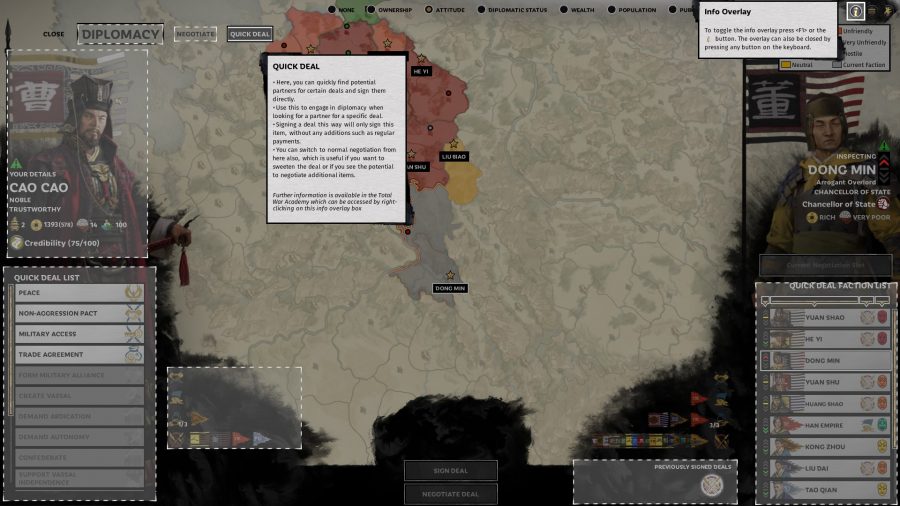 If you don’t want to get tangled in the weeds of traditional diplomatic negotiations, Three Kingdoms includes a ‘quick deals’ panel that makes it easy to see what factions are open to dealing with you. Clicking the quick deals button brings up a list of trade categories you may or may not be able to participate in, depending on your leader’s current rank. Choosing one category, non-aggression pacts for instance, shows the other factions that are in the game and the likelihood that they’ll engage with you in the pact. This way, you can see at a glance that Liu Bei is open to the idea, Cao Cao is a maybe, and Sun Jian is a firm no.

You can still engage in a more in-depth negotiation after selecting a potential trade partner, but utilizing quick deals is a fantastic way to get a feel for targets.

Three Kingdoms is the most ambitious Total War game to date, and the diplomacy system is a big part of why. With as many back alley tactics as straightforward, face-to-face negotiations, there is no limit to the amount of manipulative politics you can engage in. Hopefully this guide will get you started on the path to being the most diplomatically savvy emperor in ancient China.