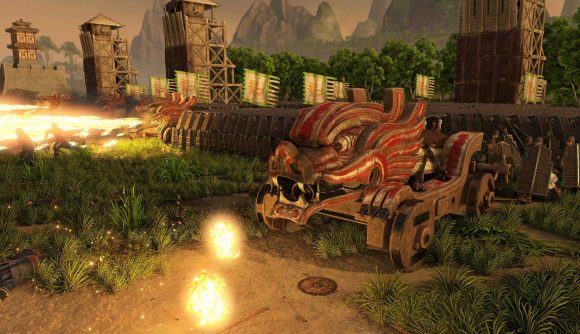 Total War: Three Kingdoms will see its first true expansion in The Furious Wild, which launches September 3. It adds the Nanman tribes, which include four playable factions and characters, and its own mini-campaign. But all Total War: Three Kingdoms players will be seeing a major free update to the game when The Furious Wild arrives, and it includes a major map rework, a new character, a new type of battlefield, and more.

The biggest change coming with the 1.6.0 patch for Total War: Three Kingdoms is the campaign map rework. Creative Assembly has done a pass on the entire map, adding new commanderies, correcting and adding names, and slotting in new commanderies for the new Nanman region in the southwest. The developer has also added strategic chokepoints, which accommodate the new kind of tactical battle, the gate pass battle.

Gate pass battles take place, as you might expect, at gate passes, which are a new type of settlement placed in strategic chokepoints. The maps are essentially fortified towns with two avenues of approach arranged opposite to each other. Attacking armies will deploy on whichever side of the settlement they approach from and fight their way through.

The update also adds a new free playable character, Shi Xie. Available in both the 190 and 194 start dates, Shi Xie earns a new currency called Splendor by “smuggling family members into important court positions”, Creative Assembly explains. Higher level positions return more Splendor, and this can be converted into tribute chests that contain special ancillaries to give to your characters.

A raft of other changes are included in the patch as well, and many of the key characters in the base game are getting buffs to the bonuses they unlock over the courses of their careers.

Total War: Three Kingdoms is just one of the many great strategy games on the market right now, but if you’ve wandered off to play Total War Saga: Troy recently, this beefy new update might be a good reason to come back to the Three Kingdoms.