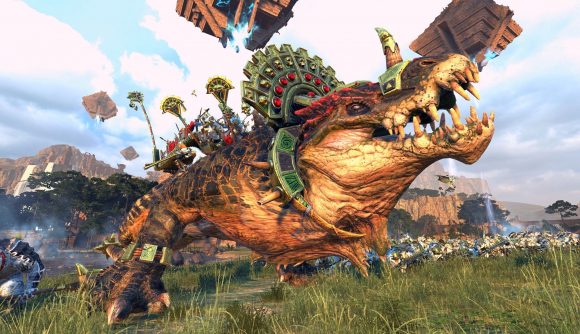 Ah, the mighty dread saurian. If any reptile ever lived up to the name “thunder lizard,” this is the one – although in Total War: Warhammer II’s The Hunter & The Beast DLC, you’re limited to just two main varieties. There’s the feral dread saurian, and the more domesticated type that rides into battle covered in blowpipe-wielding skinks. One modder has decided that’s not enough for the strategy game, and has given the strategy game’s biggest lizard’s a lore-friendly set of upgrades to help them live up to their fearsome title.

The Panoply of Ages mod by Obsidian adds five new abilities that you can add to regular dread saurians with howdahs, feral dread saurians, and the Shredder of Lustria regiment of renown. Obsidian says each ability has been sourced from Warhammer Tabletop’s 8th edition rulebooks, and they’re sure to put some spring in the big guys’ steps, as long as you can pay the cost in gold to acquire them.

Effectively, the upgrades give you a choice of how to specialise your dread saurian units. Each unit can only have one of the abilities, and once you’ve picked one, you can’t change it. Obviously that means you should choose carefully, but no matter what you pick, you’ll be getting a pretty nice upgrade.

The abilities are as follows: