Henry Cavill is in Total War: Warhammer 2 as a unique High Elf Loremaster named, simply, ‘Cavill’. Like Cher, except he sings with a greatsword.

When the British actor was first announced as Geralt of Rivia in Netflix’s The Witcher, many gamers were sceptical, finding it understandably hard to shake Doug Cockle and CD Projekt RED’s defining interpretation of the character. But it’s fair to say he smashed it, and has since been charming us all with displays of his likeminded nerdery: he has the correct opinion that PC is the best gaming platform, has been spending his lockdown time painting Warhammer miniatures, and besides The Witcher, likes to unwind with a bit of Total War.

Developer Creative Assembly was clearly charmed, too – upon starting a campaign as Eltharion in the game’s latest DLC, The Warden and The Paunch, I found that the solemn protector of Tor Yvresse has a friend. Eltharion begins the Vortex campaign with a Loremaster of Hoeth named ‘Cavill’, and as you can see in the character screen below, he has some interesting traits.

‘White Wolf’ grants a +15 bonus vs large, perhaps hinting at a career as a professional monster-slayer, and also grants a potion of toughness ability in a clear nod to the tools of Geralt’s trade. ‘Advocate’ grants +3 untainted to the local province, and the flavour text reads “Good ideas oft-times need vocal, public support to turn them into reality,” perhaps in praise of Cavill’s support for wholesome ways to spend your time at home during the current Covid-19 pandemic. 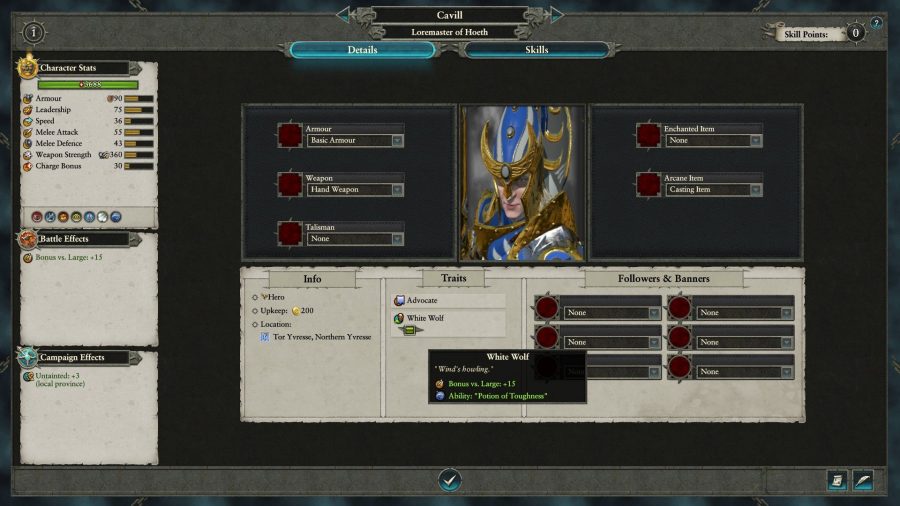 “For me I love nothing more than bringing the world of Warhammer to life, and like many of our fans I get a buzz out of playing with a new character or painting one of my minis at home,” game director Richard Aldridge told us, when reached for comment.

“So when when I saw a certain Mr Cavill mentioned that he enjoys nothing more than firing up Total War: Warhammer or painting a few models in his spare time, I thought it would be fun to somehow inject him into the game, like we have with a number of developers over the years. You might even spot me.

“With the Warden and the Paunch coming up, it felt like a good time to include Henry, and what better way than having a mighty Loremaster of Hoeth by your side with a few personal special traits to play with when starting a campaign as Eltharion.”

On the fence? Check out our Warden and The Paunch review

Indeed. Cavill was by my side throughout the campaign, and I even managed to get him inducted into Yvresse’s elite order of Mistwalkers, where he was instrumental in protecting Ulthuan from the corpulent Goblin King Grom the Paunch. We’ll gloss over the part where I got him killed by Settra the Imperishable. 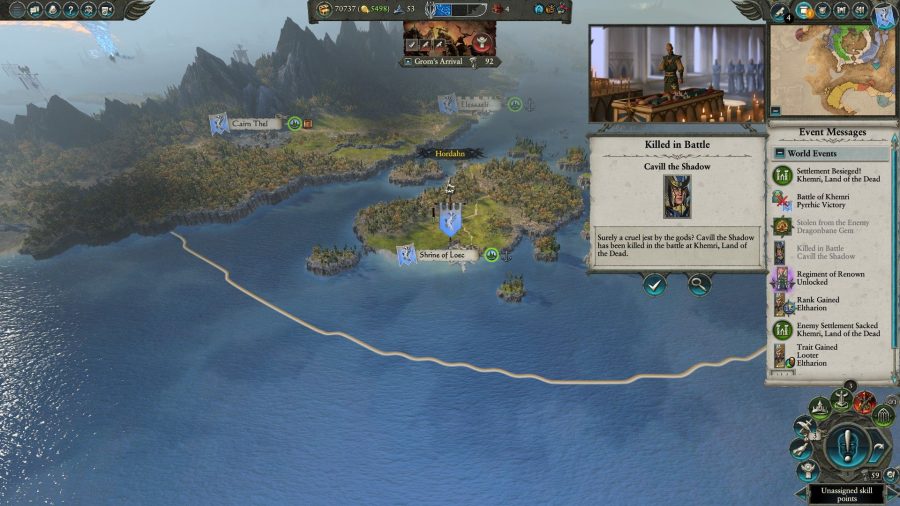