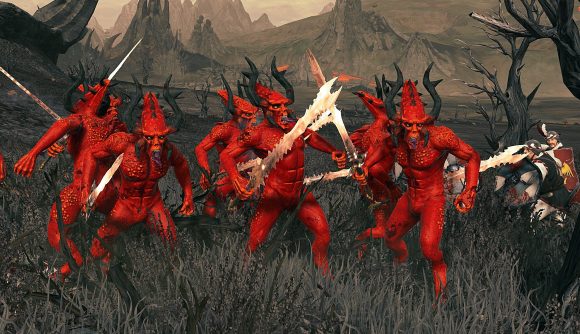 Total War: Warhammer II has been pretty good about giving us new units to march into battle, but you know what’s missing? Demons, that’s what. Fortunately, now you can whip together a formation of Bloodletters of Khorne and set about collecting some of that blood for the blood god. You might even throw in a couple skulls – you know, for his throne.

Bálint’s Bloodletters of Khorne mod adds Khorne’s reddest, maddest daemonic infantry boys to Total War: Warhammer II, and you can recruit them in either the Mortal Empires campaign playing as Chaos, or use them in multiplayer battles. Either way, they’re hard to miss: Bálint has painted them a vibrant red, accented with lolling purple tongues, black horns, and Hellblade swords glowing with the fires of Chaos.

In the tabletop game, Bloodletters have Locus of Fury, which buffs nearby lesser daemons. At full unit strength, they also get +1 bonuses to attack rolls. Bálint has given them Armour-Piercing and Anti-Infantry bonuses, with a debuff to rampage. They have 25 armour, 70 leadership, 42 speed, a magical melee attack of 55, melee defence of 40, an enhanced weapon strength of 42, and a 25 charge bonus.

But most of all, they look metal as hell. Too red, you say? Too bad: Bálint says the colour isn’t changing. 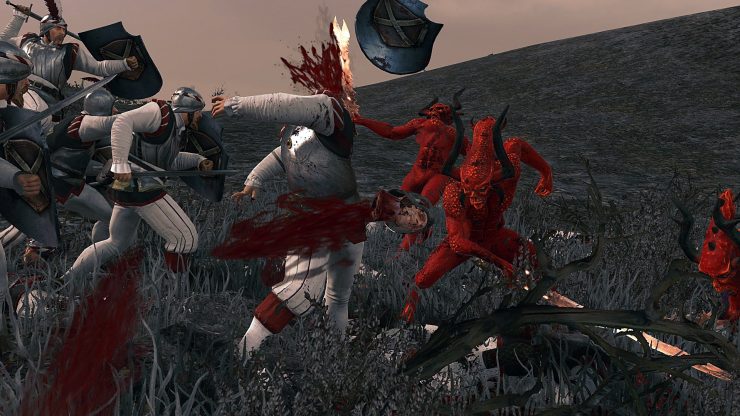 Not enough physical manifestation of pure evil for you? Consider adding Bálint’s Daemonettes of Slaanesh, or their Plaguebearers of Nurgle. They’re gross and horrible, which means they’re perfect for any strategy game, but particularly this one.

There are boatloads of great Total War: Warhammer 2 mods, so have a bash at that link if you’d like to browse some of the very best.