Why is it that so many characters in Warhammer are motivated by hunger? First we had Throgg, then it was Grom the Paunch, and now it’s Throt the Unclean. We haven’t even got to the Ogre Kingdoms yet!

But Throt trying to consume the literal avatar of life as if she’s some supercharged Gaviscon might be the most on-brand Skaven thing I’ve ever heard. And in all fairness, if I found myself trapped in Warhammer Fantasy I’d probably feel like doing some stress eating, too. It’s a world filled with horrible, mutated creatures, and none more so than the twisted creations of Clan Moulder. Throt’s faction of rat-men prides itself on knocking together the most warped monsters possible in the flesh labs of Hell Pit.

On the other end of the scale you have purity and the sanctity of nature. Naestra and Arahan are like the Wood Elf equivalent of Teclis and Tyrion, representing two sides of the same soul. It’s appropriate, then, that they fight for natural balance, and for Ariel, the avatar of Isha and Queen of Athel Loren (a legendary hero in this pack).

So, in the red corner you have the forces of nature, and in the blue, a rat boi with an upset stomach. It’s not exactly a clash for the ages. There’s tons to love about the Twisted and the Twilight, but this doesn’t feel like an iconic match in the same way as the Warden and the Paunch did. I’d say it’s indicative of where we are right now with the Total War: Warhammer series: scraping the bottom of the barrel for game two, but not quite ready to unveil Warhammer III. 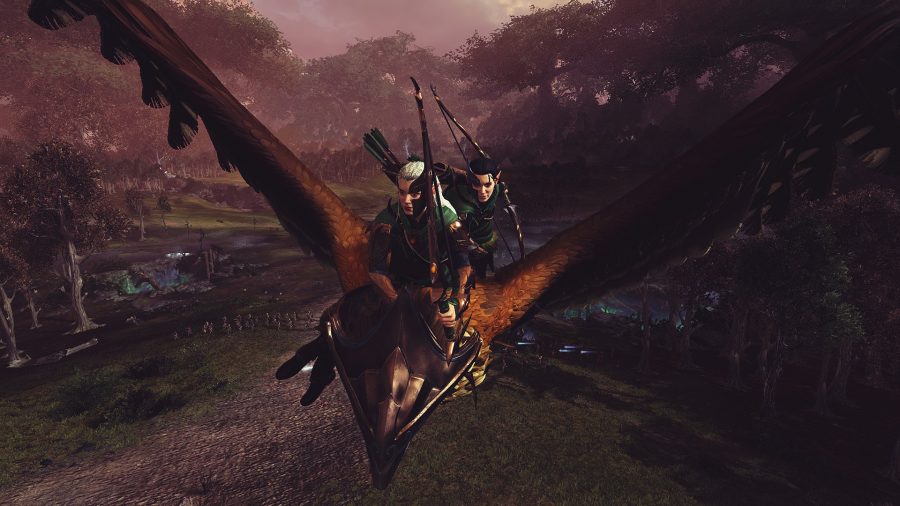 I actually enjoyed Drycha’s campaign far more than Throt's or the sisters', and in particular, her quest battle is one of the best I’ve played in either Total Warhammer game.

It’s essentially a prison break: you release forest spirits to defeat a huge Wood Elf army, all to bust the exiled Ancient, Coeddil, out of the Wild Wood.

The setup for the Twisted and the Twilight is straightforward enough. A portal has opened to the Dreaming Wood, a realm prowled by daemons of Slaanesh, so Ariel dispatches Naestra and Arahan to the Witch Wood in Naggaroth where they must heal the forest to close the portal, preventing a potential daemonic incursion. But rat-man Throt is waiting eagerly nearby, ready to pounce on Ariel like a discarded bag of chips as soon as she makes herself vulnerable – all to soothe his grumbling gut.

The campaign gives the new Wood Elf mechanics pride of place, and I’ve got say, I really enjoy them. As opposed to the previous Wild Hunt playstyle of forging out to gather amber, now you have to heal three forests around the world (or seven, in Mortal Empires) by securing their ‘heathland’ – the settlements that border them – while also dealing with incursions. The long-requested worldroots mechanic also means you can jump across the map to any of the forest realms.

When your forest reaches 100 health, you can perform a ritual to heal it permanently, granting buffs such as forest attrition. My only complaint here is that these buffs sometimes don’t feel valuable enough – perhaps if forest attrition affected heathland too, or even if garrisons in heathland were strengthened somehow, to represent establishing a defensible forest region upon healing it. 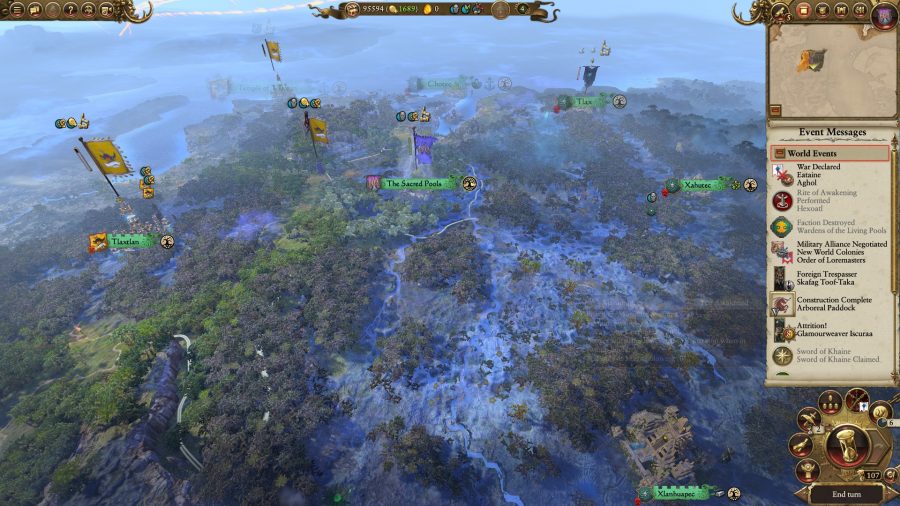 As a goal, securing heathland via the worldroots promotes a distinct and crafty playstyle that requires you to be careful of overextending yourself. At one point I jumped to the Sacred Pools in Lustria and found myself in the middle of a war between Wulfhart and the Vampire Coast. Not knowing what diplomatic tangle you’re jumping into, yet not caring because you have to secure the forest anyway, feels very Wood Elf, and reflects the tension in their lore between connection and isolation.

By comparison, Throt’s campaign doesn’t come off well – it’s basically a checklist of settlements to capture, each with increasingly powerful garrisons. Frankly, it’s a bit dull, but his new Flesh Laboratory mechanics are clever. Throt has two currencies: mutagen and growth juice. Mutagen applies buffs to specific units, but the more buffs you apply, the more chance there is that the unit gains an instability, meaning it damages itself. These units can then be recycled for more growth juice, allowing both currencies to feed into one another.

Growth juice is also gained through battles and can be redeemed for deliveries of mutated beasties, similarly to Wulfhart’s troop shipments. These can include Mutated Rat Ogres, Brood Horrors, and Hell Pit Abominations. These are extremely powerful mechanics, especially as it doesn’t matter if most Skaven units are damaged by instability because they’re already so expendable. You can just yeet your super-mutated Skavenslaves into the enemy, and it doesn’t matter if they die. Amazingly, you can even apply mutations to Regiments of Renown, which can thereby get sickeningly overpowered. 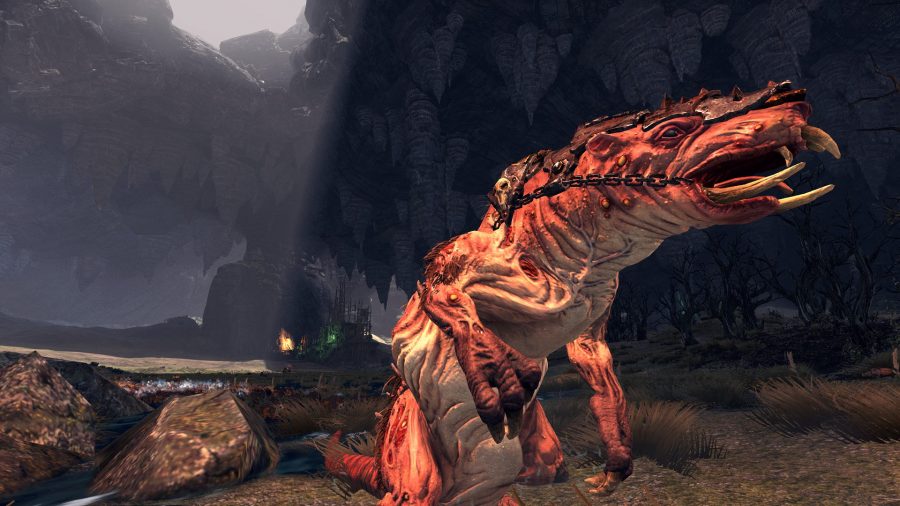 Power creep has really ratcheted up in the last two Lord packs and it continues to be a problem here. Part of the attraction of Warhammer is things being over-the-top, and the power fantasy of monsters, and ridiculous units. Even on Hard difficulty, neither the Sisters’ nor Throt’s campaigns are challenging, and by about turn 20 I found I was practically invulnerable due to the massive buffs they can each receive. The new units are also very strong. Naestra and Arahan are basically an Eagle Claw bolt thrower on an actual eagle, with a 360-degree firing arc, crazy range, and super speed. The Arrow of Kurnous Volley that they give to Hawk Riders also melts units.

The best new unit additions are the legendary heroes. Ariel is the Wood Elf version of Kroak, with tons of magic to throw at the enemy, though she won’t be deleting unit blobs with quite the same gusto. And my favourite member of Clan Moulder is Ghoritch, the ex-Khornate berserker who had his brain transplanted into a Mutant Rat Ogre. He reminds me of Krell in the best possible way, though I don’t know what it is about Khorne worshippers that has them returning to life in such weird ways.

The Twisted and the Twilight is a decent Lord pack on the whole, but for me it has the same issues as the Shadow and the Blade – a bit of a forced rivalry to shoehorn the remaining big names into the game. It’s a similar story for the units, with some great new options but no headline act. The inclusion of the lizard like Zoats – a creature from the tabletop game’s third edition – feel a bit odd at first, but it turns out there some lore to support this, and they do fill a much needed niche. 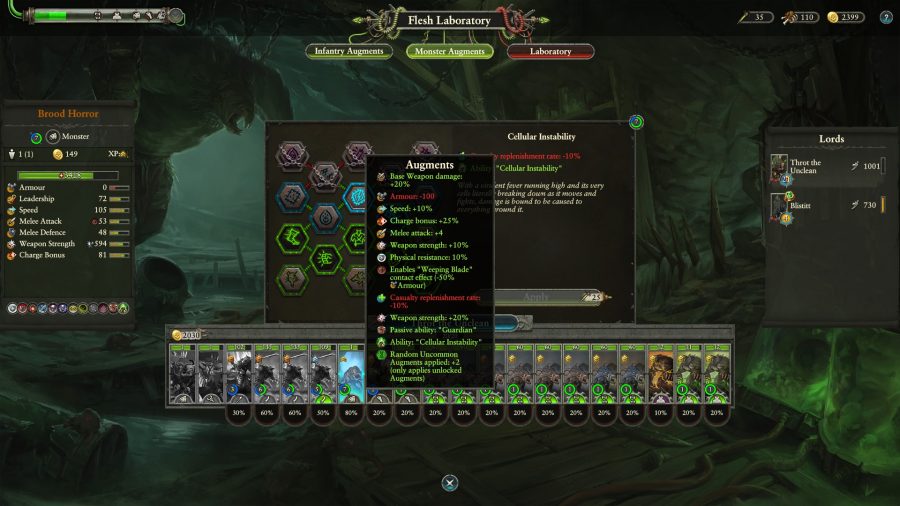 That’s not to say that the studio hasn’t put its best foot forward, as the Wood Elves’ long-awaited rework feels inventive and delivers a much more authentic experience. I also really enjoyed the characters: Throt might be fairly forgettable, but the well-acted sisterly bickering between Naestra and Arahan is excellent.

I think it’s safe to say we’re beyond the best of what Total War: Warhammer II’s DLC can offer at this point. With exceptions such as Thanquol, for whom Creative Assembly probably has bigger plans, the most iconic rivalries and biggest names missing from the vanilla release have now been added.

More like this: The best Total War: Warhammer 2 mods

Speaking for myself: after three years, and 1,500 hours of enjoyment, even if I don’t think The Twisted and the Twilight is the best Total War: Warhammer II DLC ever, I’m just happy it’s still getting support. It gives us something to play with while we eagerly anticipate the new realms that Total War: Warhammer III will open. Plus the Wood Elf rework is pretty cool.

Total War: Warhammer 2 - The Twisted and the Twilight review

Though not the most iconic rivalry, The Twisted and the Twilight offers the Wood Elves a crucial new lease of life, alongside some fun legendary heroes.