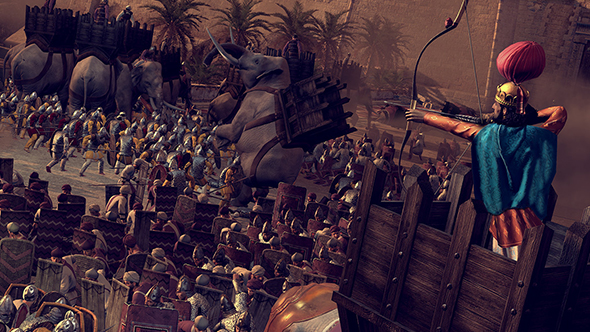 Creative Assembly have just published a full outline of what their teams are working on across the increasingly vast Total War franchise. The info is a mix of old info and new tidbits, but there are some interesting tidbits for the real-time tactics faithful.

Play more of the best strategy games on PC.

Most notably, there’s more content on the way for Rome II, including another campaign pack similar in scope to Empire Divided, as well as additional free DLC. That means the recent add-ons for Rome II didn’t happen in isolation, and now we’re looking to see continued support for a game first released nearly half a decade ago.

There’s also “something a bit different” on the way for Total War Access members. It’s not a full Total War game, but CA say that “if you like thinking strategically and stretching your tactical muscle you should be interested in what we’re up to.” Perhaps it’s some sort of browser game, but that’s pure speculation – either way, it seems an alpha or beta for the project is on the horizon.

The blog post also confirms a Lords pack as the next DLC for Warhammer II, and otherwise the team’s hard at work getting the Norsca ready for the Mortal Empires campaign. The fantasy team is also in pre-production on a mysterious new project – which is actually not mysterious at all and is totally Warhammer 3. Probably. (Almost certainly.)

Three Kingdoms was confirmed as the next historical full Total War war title a few months ago, and CA confirm that “exciting news” on the game will be coming in the months ahead. The game “will be the first Total War game to tackle ancient Chinese warfare, and we’re working on some seriously cool content that both ticks the historical authenticity box and brings some exciting new stuff to the Total War formula.”