Picture this: you’re playing a Total War: Warhammer III Mortal Empires campaign as the noble Skaven (we’re assuming it’s in the game). Your glorious Under-Empire is expanding at pace, but you’re short on cash. “Skavenslaves,” you shout, “bring me the rat-phone, so I may call upon my old mate Karl Franz for a trade deal.” Despite your generous offer, the human emperor won’t budge.

There is but one solution. One strategy that would force Franz to deliver his finest imperial cheeses straight to your snout. I am, of course, talking about Creative Assembly including Blood Bowl as a diplomacy option in Total War: Warhammer III.

Blood Bowl is a parody of American Football set in a sort-of-but-not-quite version of Warhammer Fantasy’s Old World, where disputes are settled via hyper-violent sports. In the pantheon of Games Workshop games, it’s something of a cockroach. First emerging in 1986, it has survived through a mix of official support and fan torch-bearing right up to 2016’s reboot and last year’s second edition.

There are good reasons for that longevity, too: the uniquely goofy sportsmanship present in Blood Bowl – an acceptance of the dice-dictated catastrophe which would cause the average Ultramarines Brother-Captain to headbutt their 80 quid toy tank to bits – means there’s little else like it. 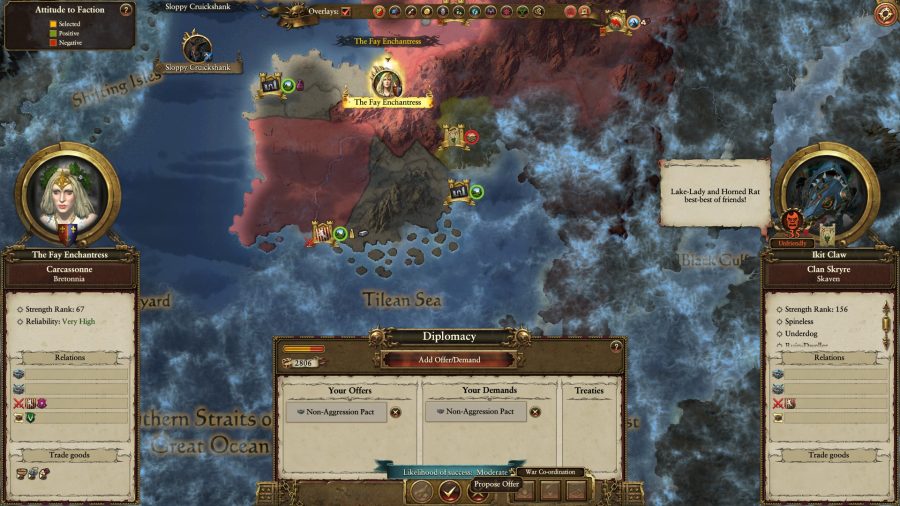 It’s also one of the few ongoing relics of the company Games Workshop used to be, not so much in terms of product lines, but in creative approach. Between the ever-increasing grimdarkness of the once semi-satirical 40k and the high fantasy facelift of Age of Sigmar, Blood Bowl stands out for still being, well, fun.

Blood Bowl stands out for still being fun, and there’s little else like it

As much Monty Python as Frank Frazetta, it’s a holdover from a company that wasn’t afraid to embrace the silliness already inherent in fictional universes where giant space cathedrals fight fungus boys, or bipedal rats make guns from Chaos-infused crack cocainum. It’s the same Games Workshop that gave us Space Orks, basically. It’s hard to imagine 40k without them, but it’s equally hard to imagine modern Games Workshop inventing them if they didn’t already exist.

And yes, obviously, it’s incredibly silly to ask Creative Assembly to include an entire playable version of Blood Bowl within the upcoming Total War: Warhammer III, especially with a third entry in Cyanide’s excellent adaption on the way. It’s also – realistic expectations yeeted into the Vortex for a moment – something that absolutely has to happen. 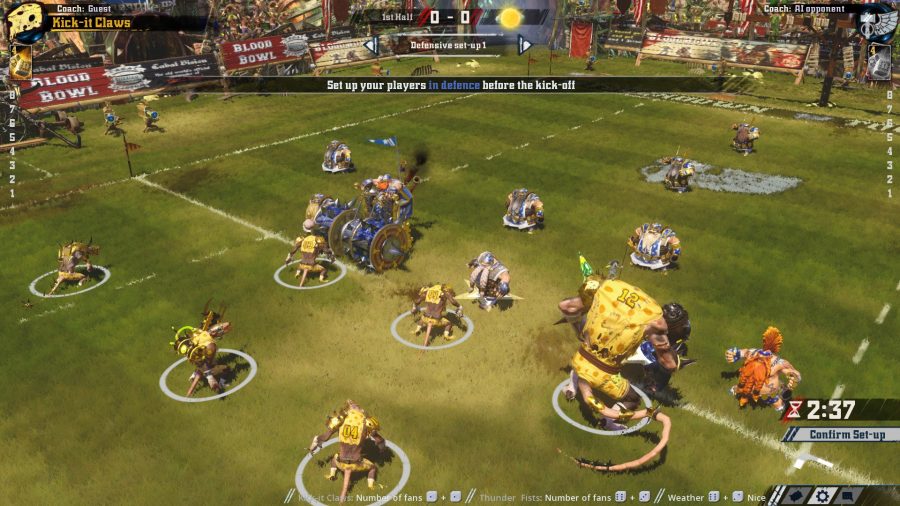 The lore of Blood Bowl states that the rules of the game were first discovered in a magical tome written by the god ‘Nuffle’, in an underground ruin during a battle between orcs and dwarfs. Nuffle is a Chaos god, of sorts, that acts as the deity of ridiculous and punishing dice rolls. Does this entirely contradict both the lore and flavour of Warhammer Fantasy? Sort of, yeah. Is it amazing? Also, yes.

Related: What we know about the Warhammer: Old World reboot

The groundwork for Blood Bowl’s inclusion has already been laid by Three Kingdoms’ lovely ‘make this work’ button, an option that invites the AI to decide exactly what your diplomacy offer is worth. That, but with a big picture of a spikey inflated pig bladder on it. If we assume Warhammer III uses the same numbered system as Three Kingdoms, then a Blood Bowl victory would be worth a huge heap of points. A loss could force you into accepting whatever ridiculous diplomacy the AI wants to rope you into.

You could even throw in a whole new building chain for attracting, training and, uh, repairing Blood Bowl talent, or new quest battles and mission chains for recruiting star players. There’s even more of an opportunity here since the developer isn’t averse to a bit of silliness. I’d argue that some of Total Warhammer’s best moments come from this willingness to lean into the setting’s latent nonsense. 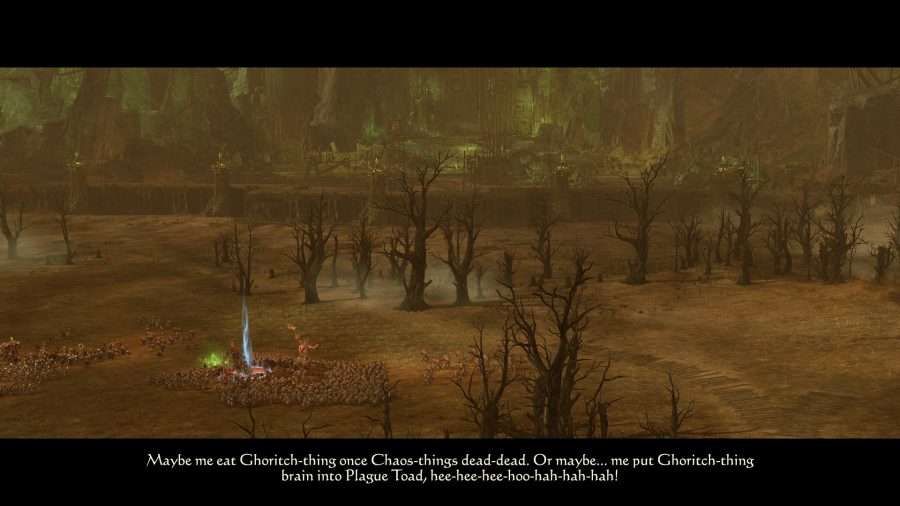 There are two undying memes in the Total Warhammer community. The first is that the Beastmen will always get overlooked, and the second is that the Skaven will always get the best toys. However you feel about this personally, it’s hard to avoid the impression that the studio has tons of fun designing Skaven updates. In lore, the Skaven toe the boundary between terrifying threat and comic relief, and this lets the developer pull shenanigans like the hilariously overpowered Clan Skryre workshop.

Even when the DLC isn’t focused on more outwardly ridiculous characters like Ikit Claw or Grom the Paunch, the writers still find time to chuck in pop culture references and other silliness to balance out the grimdark. It’s that ’90s-era GW spirit again, and key to why Total Warhammer works so well. 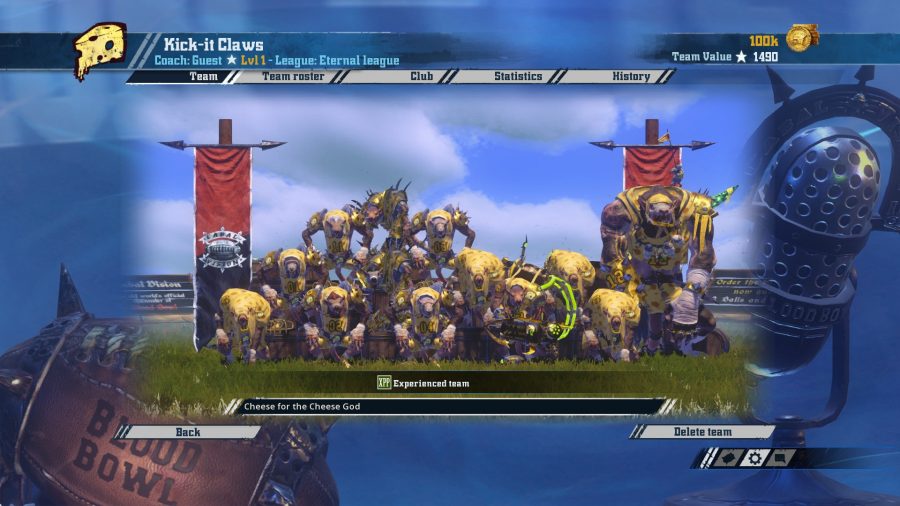 Total War: Warhammer III’s amazing trailer leans heavily into the promise of apocalyptic stakes, and after Game of Thrones shat itself, it’s exciting to get invested in decisive battles for the fate of a sprawling fantasy world again. But for all its heavy metal seriousness, it’s the silliness and the memes that keep the community talking. I’d hate for that to disappear from the final entry, even if it makes sense to put it to one side while the high-stakes standoff between Chaos and humanity takes centre stage.

Related: What we know about the Warhammer 3 release date

A Blood Bowl mode in this hugely hyped triple-A strategy game would be ridiculous. But, also, Total War: Warhammer III without it as a diplomacy option? Literally unplayable.