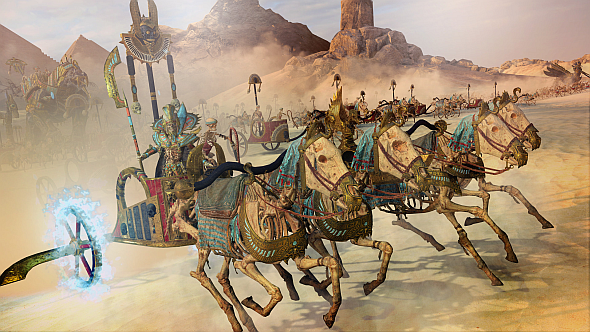 Settra does not serve; Settra rules. Or at least, he will be giving it a jolly good try on January 23, when he brings his mummified mates to Total War: Warhammer II in the Rise of the Tomb Kings DLC. We got to have a bit of a play with the game’s new race last month, and have constructed this handy guide with all the care a Necrotect would put into their new favourite Ushabti. Read our Total War: Warhammer II Tomb Kings guide for all you need to know about how the Nehekharan undead play.

After something specific? We’ve broken our Tomb Kings guide down into the following sections to make it easier for you to find your way around: 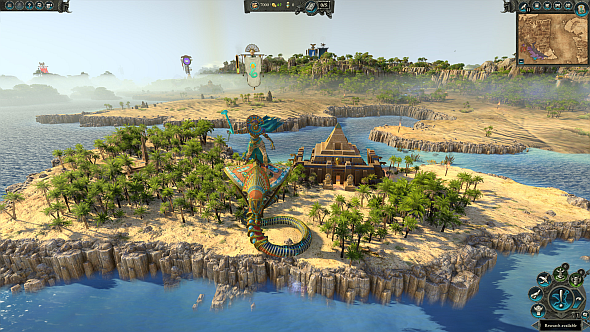 The Tomb Kings are up there with the Skaven for the weirdest faction in Total War as a series to date, for one game-changing reason: they pay no gold to either recruit or maintain their units. Instead, their armies and their units have a simple cap, which you must raise through research and building, possibly reflecting the process of awakening from centuries of death and working to restore their former glory.

The exceptions to this are your basic skeleton warriors and skeleton spearmen, which are not only free, but uncapped, meaning you can run 20-stack armies right from the start of the game – recruitment time is your only limitation. Otherwise, you will need to build more copies of the desired building if you want to raise your recruitment capacity – want more Tomb Guard? You will need another Royal Barracks. This obviously puts pressure on your town slots that other races won’t feel, since they can draw unlimited units from a single recruitment building (if they are willing to put up with the delay of global recruitment).

If you think you will be swimming in gold without the need to fund recruitment or upkeep, think again – revenue from trade and taxes is much weaker compared to other races. Settra earns just 130 gold on the first turn of his campaign, yet there are plenty of places to spend it: buildings cost as much as they do for anyone else, and the Dynasty tree and the Mortuary Cult (we’ll get there) are both full of temptations. In summary, gold is precious, and its regular sources are miserly. We felt quite a firm nudge to complete quests and wage war in order to top up our reserves – consider sacking rather than occupying settlements, raiding enemy territory often, and choosing the money in the post-battle options screen.

Conquests and quests are also your best source of the Tomb Kings’ second currency: Canopic Jars. You will spend these in the Dynasty tree and Mortuary Cult, among other places, and will generally have a choice between either jars or gold in your post-battle and settlement capture options. The exception is if you choose to raze a settlement, which will award both. 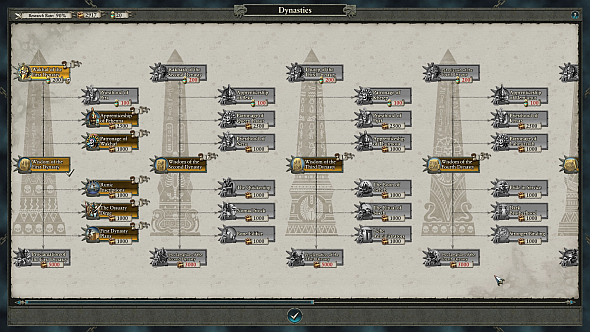 Your army capacity and hero capacity are both capped, much like your empire-wide unit capacity. You can only field one Lord at the start of the game, and must unlock more. You can do this through the tech tree or the Mortuary Cult.

Let’s talk techs first. The Tomb Kings’ tech tree represents their dynasties of their ancestors; you have a choice of six dynasties to research, each of which will increase your army capacity by one, and unlock bonus techs that will buff particular units or tactics. One of these will add a powerful unique Lord for you to recruit, and another will be a Proclamation, which will generally support your income. All of these unlocked techs are researched in a single turn by spending gold or jars.

The First Dynasty, for example, contains various buffs for Nehekharan Warriors and Chariot units, and techs to raise the recruitment capacity of each of your three Hero types. Its Proclamation grants +10% campaign movement range, +5% trade income, and -10% construction costs for infantry and chariot buildings. Its Lord is Wakhaf, who gets +8 melee attack in desert terrain, +10% range for missile units, +16 charge bonus, +20% ambush success rate, and the Stalk attribute. Other dynastic Lords are similarly powerful.

As well as the six dynasties, the Tomb King tech tree has a final column of seven techs that will grant special followers named Heralds. Each Herald can be unlocked for 150 jars, and recruiting all seven unlocks an endgame tech that increases army and global recruitment capacity, as well as reducing global recruitment duration.

Researching each dynasty will slow your research rate by 10%, so subsequent ones are slower to unlock. This adds an extra twist to the question of which to research first, and puts a gentle brake on your armies’ expansion. But dynasties are not your only option for that… 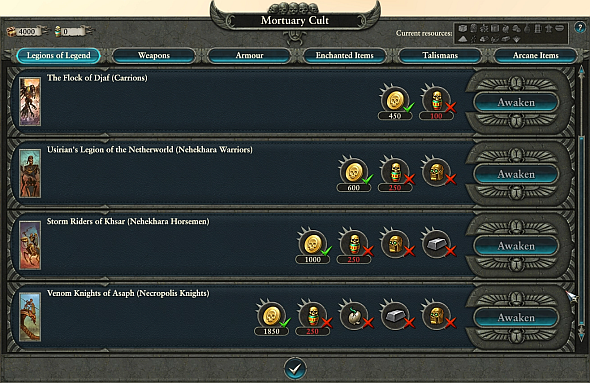 The Mortuary Cult is the order of Nehekhara’s priesthood. For Canopic Jars and trade resources – such as iron, gems, spices, and so on – the Liche Priests can craft magical items for your characters. They can also awaken Legions of Legend, which are a bit like Regiments of Renown, but Creative Assembly say they will be even stronger.

Magical items can be crafted across all categories and all rarities. Naturally, the best are the most expensive: Legendary weapons like the Crook & Flail of Radiance will cost you 500 jars and four trade resources, for instance, while the most expensive Legion of Legend will set you back 1,850 gold, 250 jars, and three trade resources. That would be the Venom Knights of Asaph – an elite unit of Necropolis Knights, who are the Tomb Kings’ tier-four, serpent-riding monstrous cavalry.

You can also buy army capacity slots at the Mortuary Cult. There is a recycling icon on the button to do this, which we helpfully forgot to mouse over, but we’re guessing this will be a repeatable ability. Trouble is, at 10,000 gold and 750 jars, it is very expensive. 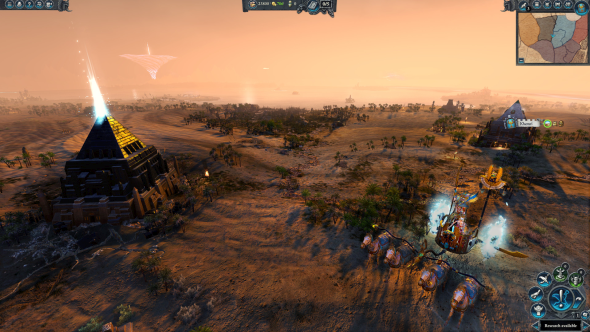 While Total War: Warhammer II’s vanilla races are fussing over a silly magic plughole, the Tomb Kings have noticed that the comet which destabilised said plughole has also reawakened the Black Pyramid of Nagash.

A little lore note, here: Nagash was a megalomaniac priest and a powerful wizard from the days when Nehekhara was still a human realm. After torturing the secrets of Dark Magic from a captured Dark Elf sorceress, he developed the lore of Necromancy, writing its secrets in nine books. He went on to betray his own brother for the throne of Khemri, Nehekhara’s greatest city, which he then nearly bankrupted to build his fearsome Black Pyramid. This pyramid was more than a monument to Nagash’s narcissism; it was also an arcane fulcrum, which he used to channel the winds of magic and amplify his power. Nagash was eventually kicked out of Khemri by a grand alliance of rival cities, but that might have been a mistake because it drove him to cast the apocalyptic spell that turned Nehekhara into a land of the living dead. But we digress.

Controlling the Black Pyramid is integral to the Tomb Kings’ campaign victory. To do so, you will need to collect five of the nine Books of Nagash. These may be carried by powerful rogue armies, or held in distant or well-protected settlements, so claiming one is quite an undertaking. One is held in the White Tower of Hoeth, for instance, so you will have to trespass on Ulthuan and attack a High Elven faction, which may or may not get assimilated by Lothern, who often emerge as one of the strongest factions in the game. It will be interesting to see how claiming the books compares with completing a Vortex ritual in terms of game pace.

Each book also confers powerful faction-wide bonuses. One enables the recruitment of certain Vampire Count units, another boosts army and unit capacities, and a third will conjure a sandstorm after conquering an enemy settlement. It is all rather cool.

Gathering the books is your biggest task, but you are not finished after it is complete. You also need to capture the Black Pyramid itself from a hostile 20-stack garrison army that includes Ushabti and Tomb Guard. Then you need to upgrade its main building chain to level five. Lastly, you must win the final battle there – we imagine this will be similar to the final battle on the Isle of the Dead at the end of the Vortex campaign. 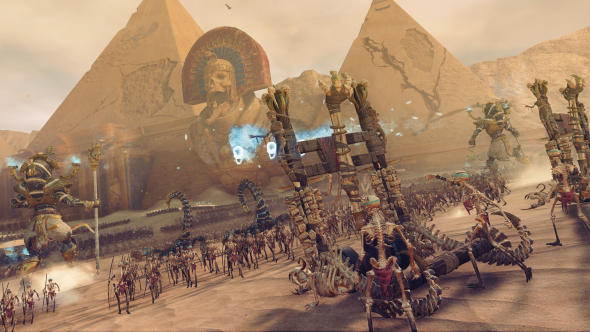 The Tomb Kings get their own lore of magic, which reflects their tabletop tactics of empowering and healing their own troops. It offers plenty of buffs, debuffs, and heals, but has little in the way of direct damage spells. 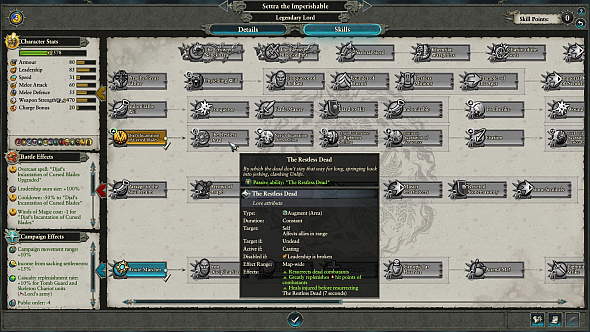 The lore attribute, Restless Dead, heals and then resurrects your army whenever you cast a spell, and has a map-wide range – it is an auto-pick, more or less. The rest of the first block includes a ward save (Incantation of Protection) and Incantation of Vengeance, a direct damage spell whose damage enemies have a high chance to resist. Why take it, then? Because it also slows them down, which should come in handy for targeting Vortices, ranged attacks, or lining up a charge.

The second block in the Lore of Nehekhara is much more aggressive, featuring a powerful debuff and a Vortex. Incantation of Dessication is a hex that hammers its target’s melee attack and defence, while Incantation of the Skullstorm is a fairly standard Vortex, dealing major magic damage over a randomly moving area of effect. Earthing, Power Drain, and Arcane Conduit complete the rest of the magic skill tree, as per usual. 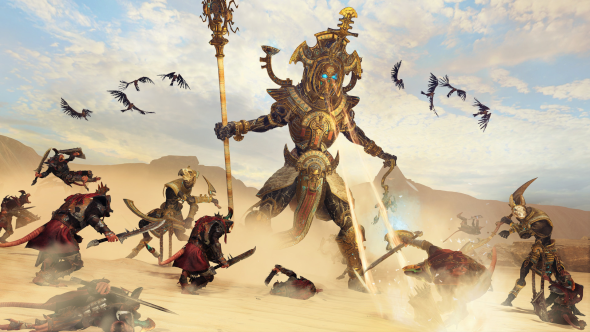 Unlike the Beastmen and Wood Elves DLC for Total War: Warhammer I, Rise of the Tomb Kings does not include a narrative mini-campaign. The trade-off for this is four Legendary Lords rather than two, and a much more complete unit roster – click here for more details. Compared to the eighth edition Tomb Kings army book in the tabletop game, the only unit we can see missing is the Necrolith Colossus – also known in previous editions of the game as a Bone Giant. Creative Assembly have even invented new units of their own – Nehekharan Warriors and Nehekharan Horsemen – to fill the power gap between skeletons at the bottom and Tomb Guard at the top.

Like the Dark Elves’ Murderous Prowess, the Tomb Kings get a special in-battle mechanic, only theirs has three tiers. It is called the Realm of Souls, and it confers regeneration on the entire Tomb Kings army. Each tier will cause the effect to last longer. Unlike Murderous Prowess, it is charged up by friendly casualties, not enemy ones.

That’s it for our Total War: Warhammer II Tomb Kings guide. Which Lord are you playing first? Let us know in the comments.