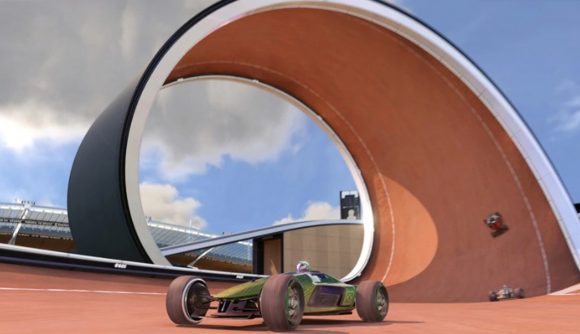 Ubisoft has announced that 2006’s Trackmania Nations is getting a tune-up in the form of an expansive remake that’ll be coming to PC later this summer. The new version will bring with it some fresh track-creation options in addition to the single-player campaign and daily track selections.

Announced at the finals of this year’s Trackmania Grand League – the game’s official competitive circuit – Ubisoft published an interview with Florent “Hylis” Castelnerac, managing director at Ubisoft Nadeo, to coincide with the news. Speaking on the current design ethos of Trackmania, he says there’s been a renewed emphasis on clarity over complexity.

“At first, we had a simple approach. Then we moved toward more rich, beautiful, and complex creations, including map-making, but lost simplicity in the process,” Castelnerac said. “Today, I would like to combine depth, beauty, and lightness. I think it is what people expect from modernity: to be powerful yet simple. I hope that’s what we’ll be with Trackmania.”

If you’ve never played a Trackmania before, it’s an inventive series of arcade racers in which you can build and share your own tracks using an increasingly deep set of tools and textures. Trackmania Nations was a free instalment that helped draw in a wider fanbase through being freeware. It still holds that low price-tag on Steam, too, though we presume this 2020 release will cost something.

As Castelnerac’s comments suggest, the general aesthetic has shifted over the years, favoring a slightly more realistic, Need For Speed-esque look in the late-2000s before reverting to the Micro Machines-like purview for this latest release.

The Trackmania Nations remake, simply titled Trackmania, will zoom onto PC on May 5. While you wait, why not check out the best racing games and best free games to keep you busy.