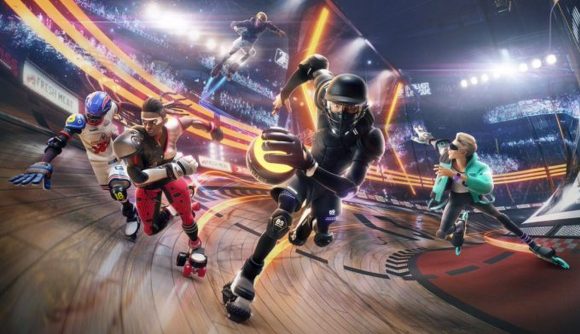 Ubisoft is reportedly working on a brand-new IP set to be revealed at E3 next month. Apparently titled Roller Champions, the new game looks to be something of a cross between Rocket League and traditional roller derby.

According to Spiel Times, Roller Champions is a take on the contact sport, which is played by two teams of five roller skaters. The real-life version of the game involves players attempting to lap one another as they skate anticlockwise around a ring, but leaked artwork for Ubisoft’s game includes a ball, suggesting a slightly different take on the rules.

For now, details are scarce, although a reveal is apparently planned for E3 and a second private alpha is due to take place very soon. Spiel Times’ report shows off two maps – one set on a beach and another in an indoor stadium – and mentions something called the Roller League. Presumably, that’s the competition that the game is based around. The attached artwork seems to borrow significantly from the USA’s National Basketball Association logo.

Of course, until Ubisoft officially announces Roller Champions, it’ll be worth taking all of this information with a pinch of salt. That said, the publisher says it has three unannounced games set to release by the end of Q1 2020 – Watch Dogs 3 seems a likely contender, but Splinter Cell rumours are far from confirmed, and a new Assassin’s Creed game is probably significantly more than a year away. With all that in mind, it’s very possible that Roller Champions could fill one of those three spots.

Read more: Ubisoft could be working on its own streaming service

As much as I loved Rocket League, Psyonix’s fast-paced football title made me too angry for my own good, and I haven’t been back in a while. Assuming Roller Champions is on its way, it’ll be interesting to see what Ubisoft can bring to the table.