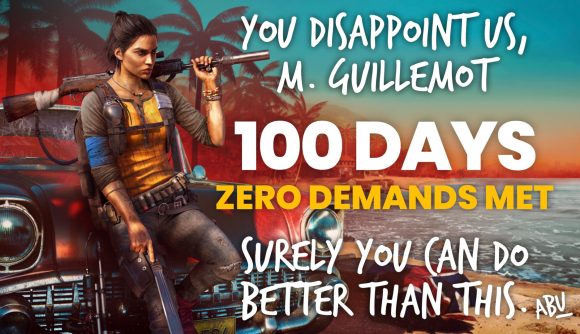 In 2020, a number of Ubisoft employees came forward with allegations of sexual discrimination and harassment at the company. A survey found that 25% of employees had witnessed or experienced discrimination first-hand. Several executives resigned in the wake of those allegations, and the company has promised change – but in the wake of similar controversy at Activision Blizzard this year, employees say Ubisoft’s actions have not been adequate. Now they’re calling on the public for support.

ABetterUbisoft, the group of current and former Ubisoft employees which penned an open letter in July asking for change at the company, has put together a petition “open for ALL our supporters to sign”, decrying Ubisoft’s lack of response to key demands. The petition is accompanied by a message of “you disappoint us” to CEO Yves Guillemot, in reference to the goofy retention emails Ubisoft sent to lapsed Far Cry 6 players.

The group reiterates its four key demands alongside the petition: to “stop promoting and moving known offenders from studio to studio”, to provide employees “a collective seat at the table”, for the company to participate in “cross-industry collaboration” to fight harassment and discrimination, and for this process to “heavily involve employees in non-management positions and union representatives”.

CEO Yves Guillemot did pen a response to that open letter, saying that Ubisoft had “made important progress over the past year”, but that response did not directly address any of the employees’ stated demands.

We reached out to Ubisoft for comment, but did not receive an immediate response.

ABetterUbisoft’s petition comes a week after Activision Blizzard announced an array of changes in response to pressure from its own employees, including a zero-tolerance harassment policy, investments in diverse hiring initiatives, the end of forced arbitration for sexual harassment claims, and a major pay cut for CEO Bobby Kotick. Since then, the ABK Workers Alliance has publicly asked Kotick if he is “prepared to voluntarily recognize a union”.