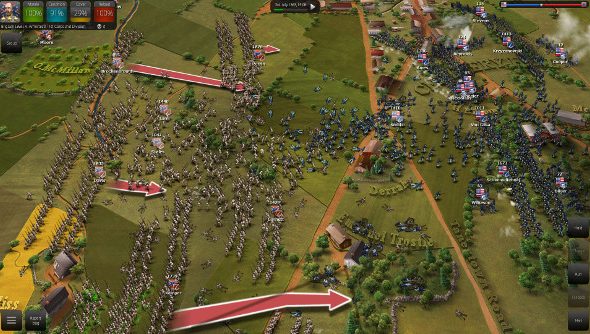 When Nick “DarthVader” Thomadis quit working on the highly-regarded DarthMod series for Total War – a bit of a huff after perceived slights from Creative Assembly and growing fatigue with the series as a whole – it was easy to think we’d seen the last of the outspoken modder.

Instead, he got an opportunity to make a game of his own. The result, Ultimate General: Gettysburg, would prove to be one of 2014’s best games and perhaps the year’s best wargame. For Thomadis, it was less vindication than it was the culmination of a lifetime’s passion.

Thomadis was an opinionated and sometimes blustering persona on the Total War forums, someone as passionate as he was talented. After his clashes with Creative Assembly and departure from the modding community, you might expect Thomadis to claim vindication and do a little “I told you so” crowing about his latest achievement.

But during a slightly scratchy phone call from his home in Athens, the 39 year-old Thomadis comes across as more self-critical and thoughtful than his Darth Vader alter-ego ever did. He’s humble about his work as a modder, perhaps even a bit deprecating.

“I had reached let’s say the peak of this ‘career,’” he says, and you can hear the eye-roll in his voice. “Some things were written about me. People mentioned my mods and they were enjoying them. So I was very fond of the game industry, and I was searching to find something there.”

That’s when Maxim Zasov, the CEO of the developer Game-Labs, contacted Thomadis and offered him a chance to make a game of his own, with a small team and development budget. Zasov’s sole directive was that Thomadis make a game that any wargaming novice could play and enjoy.

When he sat down to think about what he wanted to do, Thomadis had a couple options that he was excited about.

“My first idea was to make a game about ancient Greece. I thought as an era it would be interesting, and I am Greek and I know a lot about this era and its history. The other proposal was to make a game about the American Civil War, and it was one of my favorites also. I like this period a lot, and have read about it. So I didn’t think about it much. I didn’t want to push my agenda. If it was this era that Game Labs required, I would do it and enjoy it,” he says. 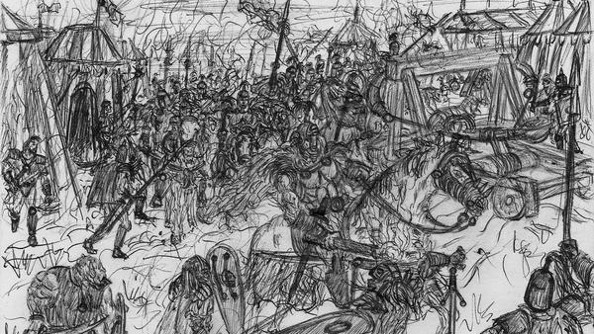 Both periods spoke to Thomadis’ interest in historical, premodern warfare, when massed formations of soldiers clashed in the open field. As a child, he would even sketch the kind of combat he found so riveting.

“I don’t know why I was so interested,” he admits, then pauses. “They were heroic times. When you watch movies, you get an intense feeling of how it was then to be a soldier. Maybe I wouldn’t try it in reality. I think it would be better in a game than to do it myself. To stand like an idiot, not trying to find cover, just because someone tells you to stand in a line and shoot? And you do it? Insane, if you think about.”

The DarthMod series was clearly inspired by this love of spectacle. Thomadis crammed every possible ounce of historical detail, every last brass button and length of gold braid, into his mods. But Thomadis is also someone who cares deeply about realism, and historical truth.

The Total War mods ran up against the limitations of the Total War games themselves. But this time his limitations were both technical and conceptual. How could he capture the spectacle of Civil War combat without undertaking more than his small team could handle? How could he capture the tactical realities of the period without making his game entirely inaccessible to the kind of people that that Zasov and Game-Labs wanted to reach? 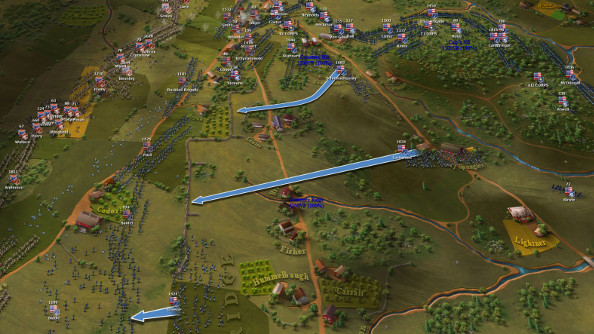 It was a difficult and nuanced challenge for a first project, but Thomadis had reason to be confident. The DarthMod projects had been enormously complex and he’d managed them just fine. In fact, Thomadis thinks coming to design via modding gave him some advantages that people who have only worked in professional game development sometimes lack.

On the other hand, Thomadis had never had to be professional about his work. He had been able to deliver what he wanted, when he wanted. That model was out the window the moment Zasov gave him a budget, a team, and a deadline.

“In modding you have freedom of choice. I have a special vision for the game, and no matter what the players would ask, I had a vision. When you have a development team, and of course more people are involved, there are other visions too,” he says. “So you try to compromise a bit more. You do compromises to satisfy the team. This is different than being a Lone Ranger in modding.”

If you’ve played any of the DarthMods, you know that they are basically “turned up to eleven” versions of the core Total War games. The Empire Total War DarthMod was basically Empire Total War with the original memory limitations thrown out the window and art and sound that was straight out of a Michael Mann or Stanley Kubrick film. The uniforms were perfect, the unit sizes were enormous, the formations were life-like, and the sound was like being there. Thomadis was able to put one of the most powerful strategy and real-time battle engines ever made to work bringing his historical visions to life.

With Ultimate General: Gettysburg, Thomadis had none of that firepower on his side.

“Total War is a 3D game, a huge production compared to us. We are 1% of their budget,” Thomadis explains. “Technically, Ultimate General is very simple: it was made in Unity editor, it was based on a 2D map, and it uses sprites. But with all the other minor things we added, the perceived results were aesthetically pleasing.”

Thomadis explains that they used a lot of tricks to make the 2D map look as vivid and enticing as it does. In addition to carefully adjusting the colors so everything seemed to pop and contrast pleasingly, the team also tried to create a really lavish, detailed game map.

For the design itself, Thomadis needed something that was simple while also being convincing. He didn’t want something that left players feeling like they weren’t controlling real armies. A bit of the classic, pugnacious“DarthVader” role slips through as he dismisses RTS games while explaining what he was trying to do.

“For me a strategy game is all about positioning and morale and the proper utilization of firepower. And I wanted all of this to be combined. An RTS that does not properly simulate morale is, for me, not a strategy game. For me it’s something very boring. You see an army of zombies. In real life, you have soldiers that may obey you, or they may not.”

The problem was that a game that would meet Thomadis’ standards for realism would likely be inaccessible for casual players and novices. He needed something that players could almost pick up on the fly, but which would also make armies behave roughly like their Civil War analogues. 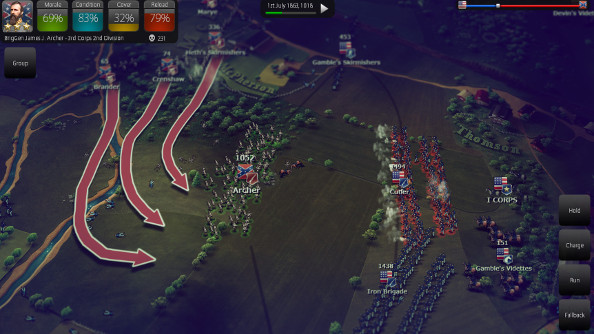 “We had to create an abstract factor that said, ‘You cannot run your units all the time. You cannot do everything with one unit and not have a penalty.’ This is what the ‘condition’ factor simulates. In just a word and a number, it describes the supply system and the fatigue. So eventually you understand that you have to keep units close to their generals and together. Or else you see huge penalties of morale and condition,” Thomadis explains.

The gamble paid-off. Gettysburg is a rare wargame that has a fair amount of depth and realism, but never expects you to read a manual or even necessarily play a tutorial. Simply paying attention during combat, and having a vague sense for how an army should behave, will fill in all the blanks after just a couple of games.

The same principle applied to their control scheme. Where just about every game that models this kind of combat uses a combination of waypointing and special controls for unit formations and facing, Ultimate General: Gettysburg uses simple arrows that players can draw directly on the map with the mouse or a touch interface.

“Conceptually, credit for this idea belongs to Maxim [Zasov], the CEO of Game-Labs. He had this request: ‘Please make a game for me that uses a movement arrow system.’ So this became the goal.”

Thomadis is quick to point out that the idea was not wholly original But he thinks Ultimate General: Gettysburg handled the execution better than anyone before. “Previously, there were games like this. Autumn Dynasty, an iPad game, for example. And other simple games. But if you ever try them, or see how they work in a Youtube video, you will see that the arrows are mostly decorative. You make an arrow, but it is usually something that is like a straight waypoint that is [visually represented] as a curve.

“Our movement arrow is much more complex,” he adds. “It uses a mechanism that is actually following the finger gesture or the movement of the mouse. This is what makes it unique. I think it is one of the best features of Ultimate General: Gettysburg.”

The war goes on

Thomadis still wishes the game were a little more realistic than it is. Command and control is largely abstracted: generals simply exist, immortal, on the battlefield and cast a kind of healing aura over the morale of nearby troops. Thomadis wanted more generals on the field, and more of them getting killed to the detriment of their subordinate forces. He wishes they’d modeled limbering and unlimbering artillery at launch, though he plans on adding that feature with a patch.

But overall, Thomadis is glad he had to compromise his vision. His team pushed back against him, and he couldn’t make the exact game he wanted. But he likely ended up with something better. “I’m the person that always pushed for historical accuracy on the team. I wanted always to have historically accurate things. And this controversy we had in the team eventually helped to make a good mix.”

Still, Thomadis hopes he can work a bit more historical accuracy into the next game. For now, that looks like another Civil War game. Antietam, he thinks, is a natural follow-up to Gettysburg. They have the engine and design for it, and doing more battles would be relatively simple. Ultimate General could even expand into Napoleonic warfare, since so many of the combat dynamics are similar.

“The second thought is that we can go to a completely different time set, like the medieval era,” Thomadis says. “But that will require some different things and more time to develop.”