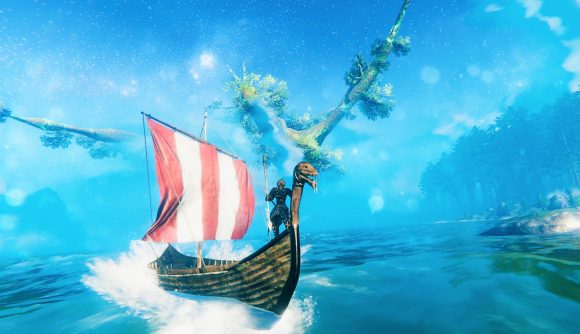 While you do plenty of adventuring in Valheim, it’s often the base building I return to most – it’s just relaxing, okay? The community’s creativity shines through as the Viking game settles into its quieter months between updates. We recently caught a glimpse of a wonderful fan build of The Witcher 3’s Kaer Trolde, though the most recent project we’re following is one group’s in-progress build of Riften from Skyrim.

Dreggas13 has been streaming the project, uploading progress shots to Reddit here and there, and it’s all looking rather fab so far. The Valheim fans are currently working on the Honeyside area, showing off shots of the sleeping lodge and the gatehouse. However, some of the more impressive parts of the build are the sewers below the city. I’ve always found mining below the surface, or simply creating the illusion that you’ve done so, one of the more fidgety parts of creating nice builds in Valheim, so it stands out.

Riften is found far to the southeast of Skyrim. The city features a large canal that served small cargo boats that would come through, though it fell into disrepair due to a lack of trade during the Civil War. Fret not, though, as Riften is doing just fine, thanks to its bustling industry of fishermen and mead makers.

You can create plenty of tankards to drink mead from in Valheim and you can even swallow a Bukeperry if you want to blow chunks. Maybe Riften and Valheim are a better fit for each other than we initially thought.

Here is one shot of the build so far:

Building Riften in Skyrim: The sleeping lodge is now done, in this screenshot we have honeyside, the sleeping lodge and the gatehouse. Slowly working our way around the horseshoe. Here I’m standing on one of the under buildings. FPS is surprisingly not bad even while streaming. from valheim

Looking at the Valheim roadmap, we’re getting a mountain biome update early this year, though we don’t have a precise date. It’s a little area refresh to keep us busy until the more extensive Mistlands update arrives, which will introduce an entirely new biome. For more information, check out our regularly updated guide above.