Valorant, formerly known as Project A, is Riot’s attempt at an intense, competitive first-person shooter. Selling itself on its tech, its cartoon aesthetic, and its assortment of agents, the game invited questions about whether it could ‘kill’ its genre rivals as soon as it was revealed. Having had a go, I can say that Valorant plays like Counter-Strike: Global Offensive, looks like Overwatch, and isn’t going to replace either.

It’s not for lack of thoughtfulness. When it comes to what players want from a precise and deadly FPS, Riot seems to have thought of everything. The aforementioned tech extends not only to sophisticated anti-cheat systems but even anti-lag ones, which will supposedly prevent someone else’s internet connectivity affecting your experience.

Environments and colours are clean and crisp so no agents can hide in plain sight, and character silhouettes are distinct for easy identification. The class system is unconventional, designed from scratch for Valorant’s exact gameplay. Riot’s meticulous attention to detail has produced an impressively polished and precise product, yet it feels like it’s missing some soul.

Perhaps it’s because I’ve struggled to connect with Valorant’s agents, as more than one of them feel just a little too Overwatch. Omen could easily be mistaken for Reaper; they’re both edgelords, for want of a better word, who teleport short distances in wisps of darkness. And get this: Omen’s ultimate is called ‘From the Shadows’, which is, verbatim, one of the lines Reaper says after teleporting. This isn’t just wearing your influences on your sleeve; this is an open homage.

How about Sova – an archer who shoots an arrow with tracking abilities. Sounds a bit like a Russian Hanzo, does he not? Or Sage, who has some healing capabilities, but also a handy-dandy ice-like wall which she can use to block areas off from the eneMei. It’s not like Valorant is one of those shameless Chinese Overwatch clones, but to see so many familiar faces does undermine its own sense of authenticity and personality.

Vocally, characters express their personality chiefly in snarky comments thrown back and forth with no end in sight. You may say this is all secondary to the gameplay, but it certainly didn’t hurt Overwatch that its fans wanted to know everything about its cast, whereas Valorant’s agents feel like vehicles to deliver abilities and nothing more.

For more fun with friends: see the best multiplayer games on PC

But yes, gameplay is paramount. We got to play on two maps: Bind and Haven. When introducing them the devs tell us that they’re going for quality over quantity – they want each new map to challenge the players with a question. Bind asks how you would play on a map that has no centre, and you’re forced to fight on the objectives themselves. Haven, on the other hand, says the centre is so important that it puts another bomb site there (though in Valorant you plant ‘spikes’). I had more fun on Bind, but perhaps that’s because my chosen agent Viper was very effective at blocking sightlines and deceiving enemies. 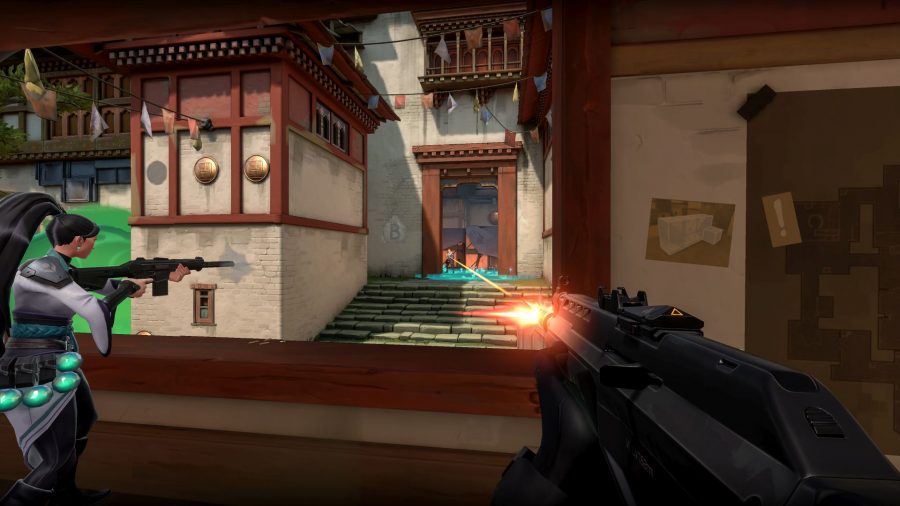 Riot says it wants you to play these maps for thousands of hours, with which will come “depth of mastery”, in the devs’ words. I was playing alongside some of the biggest names in Overwatch, CS:GO, Fortnite, and more – skilled opponents by any standard – but when we watched a video of the devs playing, the entire room was taken aback at how a practised Riot employee made use of their abilities and movement. To hear these pro gamers audibly gasp at the level of play from someone who’s had the game for months as opposed to a day was quite something. Your knowledge of your chosen FPS gives you a foot up, no doubt about it, but mastering the maps and the agents puts you in another league.

I hope Riot finds and develops something unique to Valorant. It's fantastic, but is it different enough to last?

And yet it’s not just about knowledge and twitch skills. Like CS:GO, there’s a buy phase at the start of each round, during which you can prepare for defending or attacking. Besides the guns – which range across many prices and stats, of course – each agent has two abilities that you may purchase at this point, as well as a signature ability which is free, and an ultimate which you charge during play.

Knowing the guns is, if anything, more important than knowing the agents – Valorant is an FPS at heart, with abilities more like the cherry on top a giant cake of firearms, and Riot says it doesn’t want them to dominate gunplay. So don’t be fooled by the cartoony aesthetic; gun behaviour is closer to CS:GO than Fortnite. Moving while shooting isn’t nearly as precise as standing still, for example. Some guns are so impactful you’ll never even see who killed you – there’s no kill-cam in Valorant, only a report of where your enemy hit you and how much damage they did. 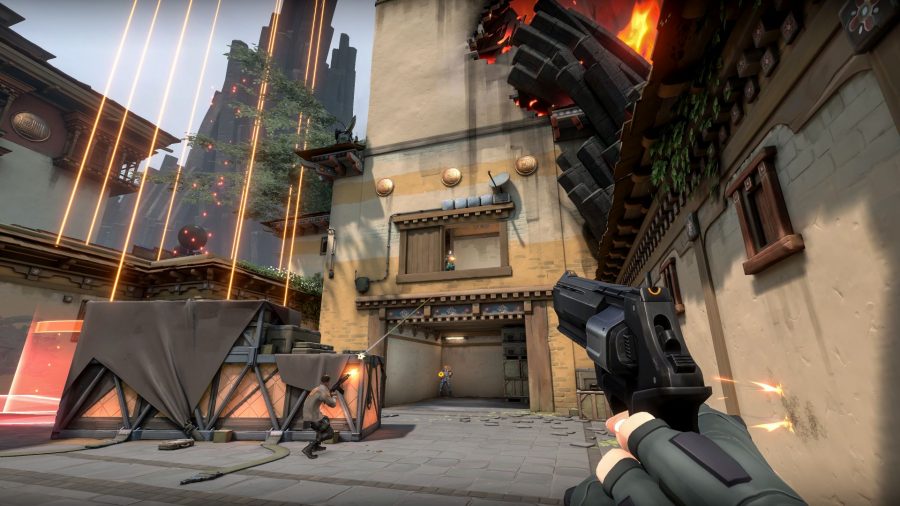 By contrast, almost all abilities in the game are designed to give you a chance to react to them. Even if the opportunity is brief, you can prevent Sova’s location arrow from seeing you, or turn away from a blinding flash from Phoenix, or even prevent Omen from teleporting to your location. Abilities are meant to be counteracted, so guns will always come out on top. This feature, in particular, is probably very appealing to CS:GO players, as someone on comms noted – indeed, Valorant is hugely reminiscent of Valve’s shooter outside of abilities. They just add a few more options.

Playing Valorant against pros for only three days isn’t enough to predict what will happen when it falls into the hands of the public. The thousands upon thousands of play hours that will be clocked within days of release will expose and disseminate quirks in map, weapon, and character balance that no one can anticipate – that’s just the reality of online multiplayer games. However, what I can say is that Riot has delivered exactly what it: a highly precise, heart-in-your-mouth competitive, and dare I say, beautiful first-person shooter. 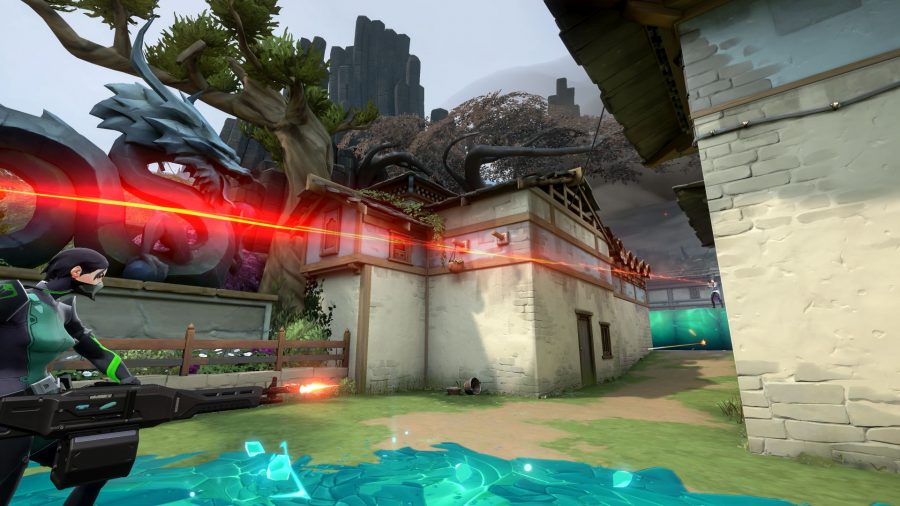 Valorant will surely attract players from Overwatch, CS:GO, Rainbow Six Siege, probably a couple of battle royales, and more, but I don’t know how many, or how long they’ll stay. It has taken a lot of inspiration from those that came before it; it’s the Frankenstein’s monster of the multiplayer shooter. I mean this as a compliment; in many ways, Valorant is an improved, more polished version of all its influences, but I’m sceptical that it will replace any of them because it’s not any of them. I get constant déjà vu while playing it: a flash of CS:GO here, a flash of Overwatch there. It just doesn’t feel like I’m playing anything new.

Related: the best shooters on PC in 2020

I can’t wait to play some more when the closed beta opens on April 7. I keep thinking of ways I can improve, and wondering how regular gamers will play compared to streamers and influencers. In particular, I can’t wait to see how Riot reacts to their feedback – from this starting point, I hope the studio will identify and develop something unique to Valorant. The game isn’t just good, it’s fantastic – but will it be different enough to survive in this most competitive of genres, and last the ten years Riot has planned?

If you’re asking yourself can my PC run Valorant, then check your setup against the Valorant system requirements.