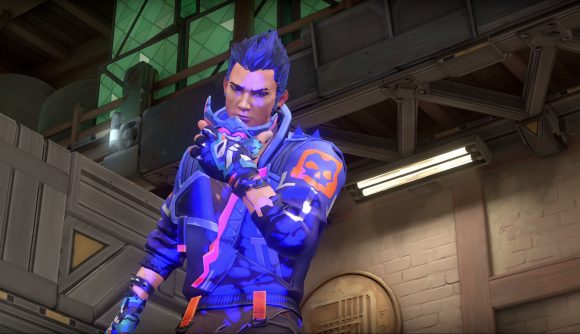 Riot Games has revealed the major content coming to Valorant as part of Episode 2, Act 1. In just a few days, players will get the chance to play as new character Yoru, earn some fresh prizes in the new battlepass, and get another swing at some old skins.

The latest agent to join the FPS game is Yoru, a Japanese infiltration expert that uses a number of tools to create distractions and prove a nuisance for the other team. Yoru has the ability to project the sound of footsteps, to send an unsuspecting foe running the opposite direction, and he can become temporarily invisible and invulnerable by jumping into another dimension. He has teleportation, for a quick getaway, and he can harness unstable energy from reality and fire it at his opponents.

“The idea of ‘stealthy infiltration’ is something we toyed around with for years, but could never fit in the game. We felt that if we started from the ground up, we could create an agent that revolved around the idea of ‘stealthy infiltration’ in some way,” John Goscicki, Valorant characters product lead, says in the press release. “With that in mind we also wanted Yoru to be an Agent that could create some really high moments throughout the game. The kind of rounds where if you pull everything off correctly you feel like the greatest player ever. The team has been super stoked to get this guy in players’ hands, he is definitely going to cause some disruption within the game.”

The battlepass for Episode 2, Act 1 of the multiplayer game will run until March 1. It has 12 gun skins, one melee skin, gun buddies, and more, and the notable items include Infinity Phantam, Infinity Classic, Outpost Melee, and the Men and Sage Versus card. Picking one up will cost you 1,000 VP.

Riot has released this cinematic, showing off Yoru’s moves:

The five previously available skins can be purchased for 1,775 VP a pop, and they include Sovereign Ghost and Nebula Ares. Valorant Season 2, Act 1 starts on January 12. In the meantime, check out all of the Valorant characters available in the game so far.