When Vampire: The Masquerade fans think about their beloved series, they aren’t picturing 39 vampires shooting each other in the middle of Prague. Such open displays of supernatural violence don’t immediately gel with the titular ‘Masquerade’ – a conspiracy to convince the public that vampires don’t exist. This might explain fans’ initial scepticism of the game’s announcement, but Bloodhunt delves into the deep lore of VTM to justify its existence in this universe.

And developer Sharkmob anticipated the reaction. “We knew that it was controversial to pair Vampire: The Masquerade with battle royale,” says marketing director André Persson. “I mean, just listen to it. At first you’re like, what? But people who know the brand well understand that there is support for a blood hunt in the lore.”

Before you venture onto the battlefield, every player has a chance to browse the Elysium – Bloodhunt’s hub world. Here you can learn about your clan from the designated primogen (clan elder). This information will no doubt make sense to someone who has dabbled in VTM, but for a relative newcomer it’s rather overwhelming.

Fortunately, heading into a match for the first time feels like the polar opposite of my confusing stroll around the Elysium. The combat feels similar to a regular third-person battle royale game, which is to say everything feels great. 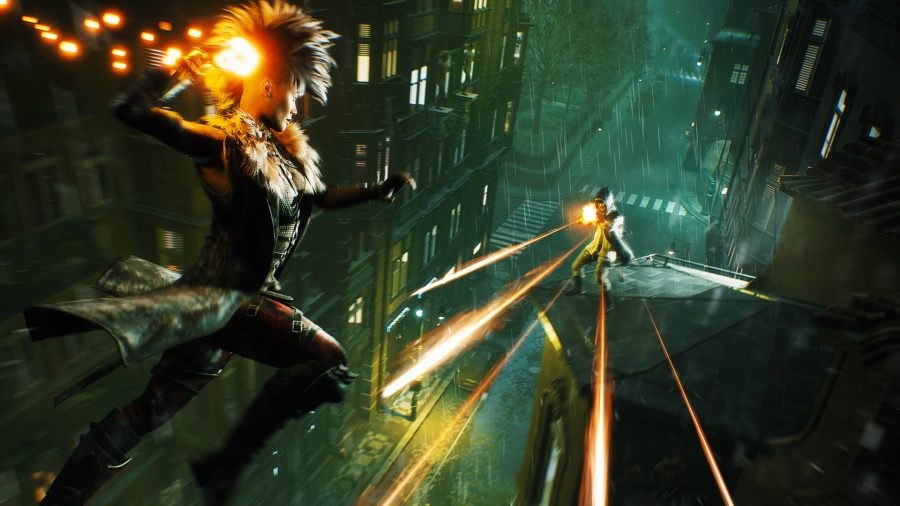 However, there are a couple of tweaks to encourage you to be more aggressive. Rather than dropping in, you pick a location and immediately spawn in that zone. The map then briefly reveals the location of other squads so you can begin hunting them down – and the hunt is a joy. Bloodhunt’s movement system is flexible in that it lets you climb buildings, and slide to build momentum. Once you master these movement options, you can chase down squads at speed and eliminate them quickly.

We knew that pairing Vampire: The Masquerade with battle royale was controversial

Set at night in the streets of Prague, Bloodhunt features a dark, gothic aesthetic to match the tone of the source material. The large map has enough space to fit its 39-player cap comfortably, though you won’t get to explore it for too long before the red smoke starts to billow in. You need to save enough time between contractions to scavenge for equipment and feed on a few wandering humans – doing this will reduce your ability cooldowns. Just try not to accidentally kill any of them, as your location will be temporarily marked on the map for everyone to see.

These unique vampiric powers are another way in which Bloodhunt differentiates itself from other battle royales. There are six classes split into three clans; though picking a clan may sound important, you can choose between any of the six classes before each match. Every vampire has a clan, passive, and archetype skill, and these include movement options such as jumping across buildings, and tactical powers like throwing grenades or seeing through walls. 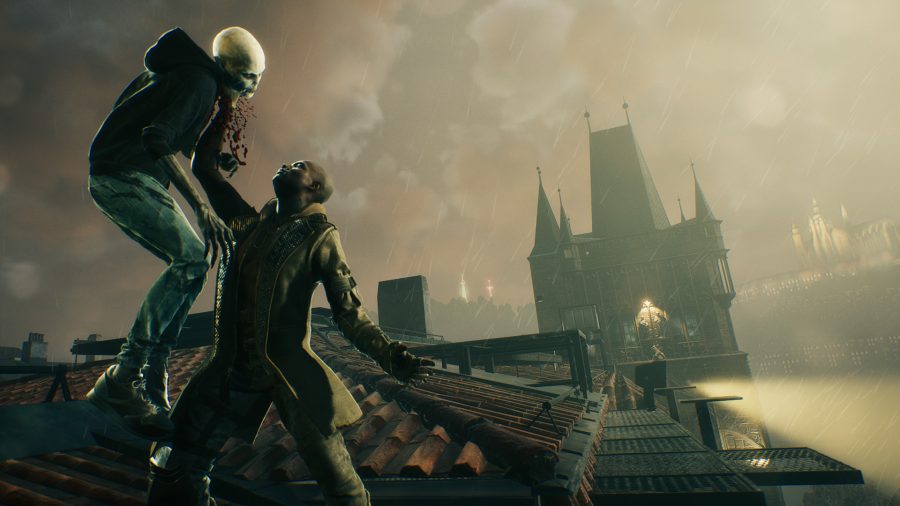 There’s just enough variety to make these characters feel unique, but none of these abilities are overpowered enough to win games on their own. That said, the Muse class feels essential in trios. Their Rejuvenating Voice skill restores nearby teammates’ health, which is valuable during sweaty firefights. This class isn’t strictly for supporting others, though – when playing solo, having the ability to teleport while downed lets you get back on your feet quickly and seek revenge on your killer.

Speaking of which, vampires don’t bleed out and die when knocked down in Bloodhunt. After 40 seconds, you’ll come back to life to fight once more. This creates a neat metagame in which players will crawl near cars and into doorways to hide. Downed enemies aren’t marked on your radar, so you’ll need to keep an eye on the whole enemy squad, and diablerise them (drink their blood) to finish them.

I don’t have anything bad to say about Bloodhunt after playing it for three hours. It’s a competent game that has cleverly introduced vampire themes to the battle royale genre. It’s completely free-to-play, with no loot box mechanics, and only cosmetic microtransactions. It looks good and runs well for a pre-alpha build. I’m just not sure whether the elements that make this game unique will be strong enough to pull me away from its competitors. 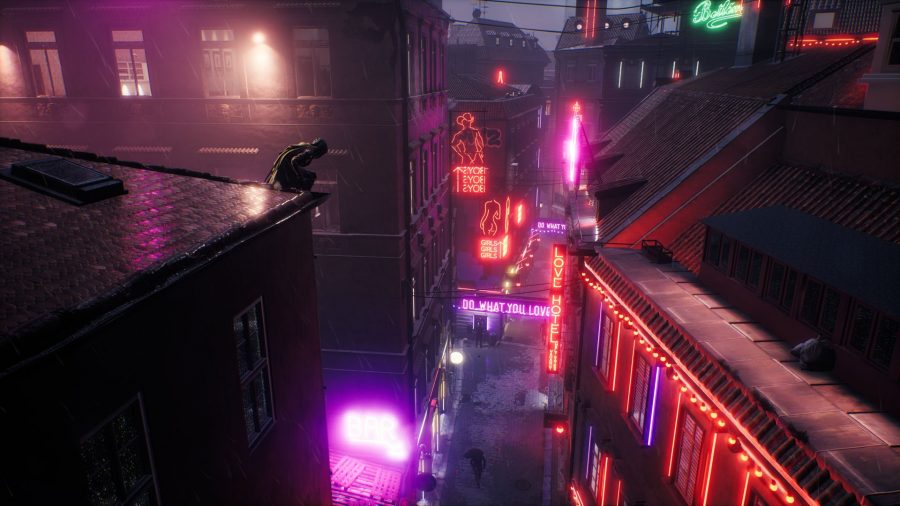 Is Bloodhunt good enough to convince diehard VTM fans to disregard their initial consternation and give it a shot? That depends. “When it comes to anger, anger is a reaction that comes out of love for something,” says Martin Hultberg, communications and IP director at Sharkmob. “If you love something and you react that way, I would hope you’re doing it because you love this universe. With that, all I have to say is give the game a chance, take a look at it, and if you don’t like it, it’s still free to play and won’t cost a dime from your wallet.”

Bloodhunt is out later this year, so not too much longer before you can judge it for yourself. If you’re still unconvinced by the battle royale approach then you can attempt to slake your thirst by checking out our list of the best vampire games, or our roundup of the best RPG games on PC.