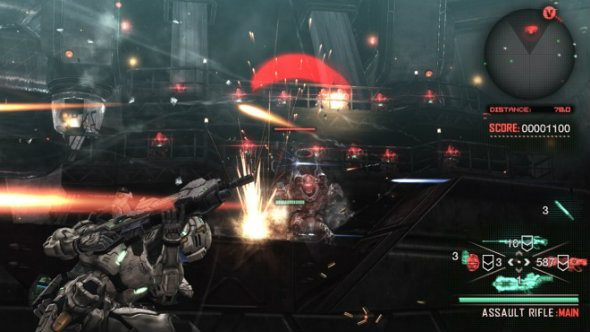 After teasing us for the last few days, Sega have confirmed that Vanquish is coming to PC on May 25.

Check out which games are definitely on the way in 2017, with our list of upcoming PC games.

It sounds like we can expect another impressive port, with full Steam support and a thorough bit of graphical and technical polish.

Sega say the game will run at 60 fps, but will also permit unlocked frame rates, so you can crank it up to 144 fps if your rig can cope. Resolution is also unlocked up to 4K, with anti-aliasing, anisotropic filtering, SSAO lighting, and scalable texture and shadow quality. Naturally, it will support keyboard and mouse, and is available on Steam with achievements, trading cards, cloud save, big picture mode and leader boards.

“It was great to see the positive response from our community to the Bayonetta PC launch last month, and we are pleased to be able to announce Vanquish, another of our highly requested back catalogue titles,” says John Clark, senior vice president of commercial publishing at Sega Europe. “There’s more to come from Sega in this space, so stay tuned for further announcements.”

You can pre-order Vanquish on Steam here, and you’ll get 25% off the digital deluxe edition if you do so. If you wait until after its official release on the 25th, however, it’ll revert to the standard edition.

Update May 9, 2017:Sega have tweeted a third suspicious teaser image.

As we guessed earlier today, Sega have tweeted a third image with a number on it, possibly revealing the release date for a PC port of the 2010 action game Vanquish.

Add it to the first two (below), and the numbers can be formatted 25/05/2017. Though the latest two tweets don’t look like much, the first is clearly a depiction of the emblem of the Order of the Russian Star, Vanquish’s antagonists.

Given Platinum Games’ previous comments about porting their games to PC, and the sudden appearance of Bayonetta on Steam, it’s by no means a reach to assume that Vanquish will be joining her. We’ll let you know more when the 25th rolls around.

Update May 9, 2017:Sega have released another Vanquish teaser image.

Sega have tweeted an ambiguous image with the digits ’05’ on it.

Why is that news? Because in the context of another tweet, depicting the emblem of the bad guys from Vanquish, it could well mean that a PC port of that game is coming as soon as this month.

Yesterday’s image (see below) had the year ‘2017’. If ’05’ indicates the month of May, perhaps we can expect another tweet tomorrow with the day, thus completing the release date for a Vanquish PC port. If that seems optimistic, consider that Bayonetta’s PC port was released with no fanfare at all.

Vanquish was a sci-fi third-person shooter, released in 2010 exclusively on Xbox 360 and PlayStation 3. Notable and lauded innovations included the addition of beat-’em-up elements, sliding boost mechanic, clever use of bullet time and slick visual style.

Update May 8, 2017: Sega tease that a re-release of Vanquish is indeed coming this year.

Dust off the ARS, as Sega have just released a teaser image on their Twitter which all but confirms that Vanquish will be getting a PC re-release this year. Shown below, the Tweet shows off the emblem of the Order of the Russian Star, the military group which protagonist Sam Gideon fights during the Story Mode of Vanquish.

Check out which games are definitely on the way in 2017, with our list of upcoming PC games.

The logo is also present on the wings of the Bogey, the ARS replica worn by Vanquish’s primary antagonist Victor Zaitsev. With E3 fast approaching, expect details on a concrete release date for a PC version of Vanquish sometime during the convention.

Original story April 11, 2017: Bayonetta just had a surprise launch on PC, running at 60fps, up to 4K resolutions, and with full-on keyboard and mouse support. This could just be the start of something, as Platinum Games say they would love to keep porting their old games to PC, so long as the publishers are up for it.

“The PC market is huge and can definitely not be ignored. We are absolutely aware of that, and we’ve always felt this way,” a spokesperson for Platinum told PC Gamer. “We’ve always had a positive stance towards porting our titles to PC, but the decisions as to which platforms we release our games on, and which platforms are the main focus for the games we make are largely made by the publishers, so this is not something we can decide on our own.

“However, most third-party publishers nowadays realise the PC should not be ignored, so I believe we should be able to become more actively involved in the PC market from here on out.”

Players have been hankering for Bayonetta on PC for a while now, and Platinum have other games in their backlog that non-console owners have missed out on, the aforementioned Vanquish being among the most requested.

Apparently Bayonetta’s Wii U port helped Platinum Games get better at the porting process, and their current proprietary engine is built with PC ports in mind. In other words, it’ll be even easier in future.

“We still feel strongly about putting more consideration into the PC market. If our current efforts prove successful, this will only make PC development more attractive,” say Platinum. “If it were up to us, we’d port all of our games to PC, but it all depends on the publishers.”

Perhaps this will take out the sting of Scalebound’s cancellation.