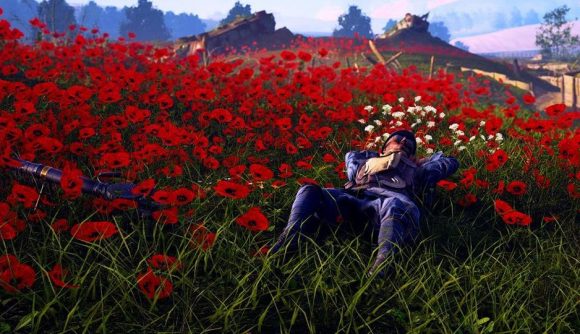 Today is Veterans Day in the United States, but everywhere else it’s called Remembrance Day: the anniversary of the armistice that marked the end of the First World War. And this year is the centenary – the one hundredth anniversary of the guns of “The Great War” finally going quiet.

Videogames have always borrowed martial themes and used them for fun, so it can be awkward when war-themed games attempt to be solemn about their subject matter. But here are a few gestures games have made to mark the 100-year anniversary of the armistice this year.

The developers of Verdun and its forthcoming standalone expansion Tannenberg have collected 100 stories of people who died in World War I and posted them to the games’ Facebook page, along with portraits. Many of these are soldiers, but others are writers, clerics, footballers, and teachers. You can check out the gallery here. The studio has also created a Facebook frame, if you’d like to add a red poppy to your profile photo.

A group of Verdun players also organized a memorial event at the exact time of the 100-year anniversary. At 11 minutes before 11:00 CET, players gathered to observe a solemn in-game silence. NCOs fired a barrage of mortars, and others saluted with rifle volleys. No combat was allowed during the event.

Call of Duty: Black Ops 4 players can purchase a ‘Salute Pack’ that includes a sharp salute gesture, with all proceeds going to the Call of Duty Endowment, a US- and UK-based not-for-profit organization that works to help veterans find high-quality employment. The Endowment’s official Twitter account encouraged players to grab clips of themselves using the salute in game, and share them on social media with the hashtag #CODNATION.

This #VeteransDay, join the #CODNATION Veteran's Salute. Use the gesture, record a video, and tag it #CODNATION. Need the gesture? Purchase the Salute Pack in the #BlackOps4 in-game store today! pic.twitter.com/oyr3ugLTfi

Ubisoft offered a Club Challenge weekly reward for Rainbow Six Siege players – winning one match with a squad of five would earn each player a red poppy charm to hang on their weapons.

A group of Battlefield 1 players marked the occasion by ceasing hostilities at the eleventh hour today – or at least they tried valiantly. A pilot either didn’t get the memo or chose to ignore it, making the peaceful celebration on the beach a bit more chaotic than it was meant to be.

This is the 100 Year Anniversary of the End of WW1. On the 11th Hour we stopped fighting. from r/Battlefield

As Eurogamer reports, the backstabber who killed the camera operator apologized in the thread’s comments and was quickly forgiven.

As I mentioned above, it’s frequently very weird and sometimes downright off-putting when games try to suddenly take war seriously and reverently, and the dissonance that results when they do can sometimes ruin the effect. But it’s still touching, in a charmingly goofy way, to watch games and their players render honors on this solemn day.