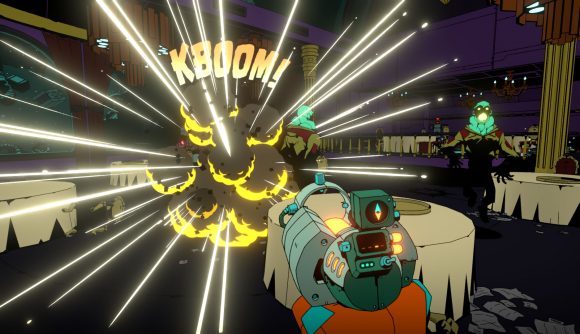 If you're an Amazon Prime subscriber, you just got some new free PC games. January's selection of free games is now available, and this first batch of 2021 includes the graphic novel-inspired FPS game Void Bastards.

In Void Bastards, you lead a team of misfits out of the Sargasso Nebula, creeping through derelict space frigates, using a blend of tactical decisions and sharpshooting to fend off the many dangers you'll discover within. There's a rewarding strategy layer to the action, as you'll be plotting your course through the nebula, picking your team's next location as well as your squad and loadout.

This month's bundle also includes engineering-based physical comedy games Bridge Constructor Playground and When Ski Lifts Go Wrong, both of which involve piecing together nominally safe spans for vehicles and skiers to cross. Of course, half the fun is watching what happens when structures fail, so prepare to enjoy many scenes of trucks plummeting into rivers and snowmobilers pancaking against cliff faces when your plans don't quite work out.

Alt-Frequencies is also included in January’s free games, and it’s a narrative game about being stuck in a time loop. You’ll have to record and rewind time, broadcasting clips of radio programmes in order to change the course of the day’s events.

This month’s free Prime games round out with the visual novel Along the Edge, which is a piece of interactive fiction set in the countryside of Europe in which you’ll see your character’s appearance change depending on the choices you make throughout the story.

If you’re already a Prime subscriber, head to the Prime Gaming loot page to claim your games. If not, you can sign up for a free trial of Amazon Prime – and you’ll be able to pick up this month’s batch of free games if you do. You’ll need to download and install your games through the free Prime Gaming app.