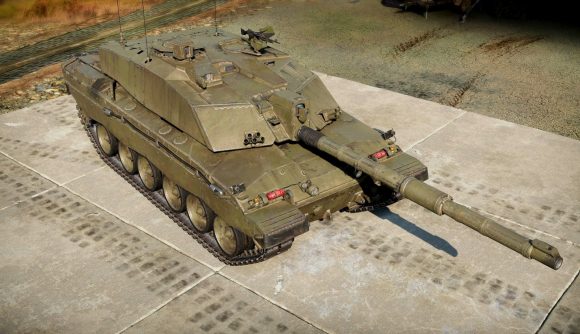 A misguided attempt to improve the Challenger 2 tank in the free-to-play MMO War Thunder will not, it seems, result in any improvements to the vehicle. That’s because Gaijin Entertainment will not (and cannot, legally speaking) use classified information in the development of its game.

There’s been a bit of a dust-up over at the War Thunder forums. One user, who claims to have been a Challenger 2 tank commander and gunnery instructor in real life, argued that the Challenger 2’s in-game design needs adjustment. To help make the point, the user posted what appeared to be pages from the official Challenger 2 Army Equipment Support Publication (a manual and maintenance guide similar to the US Army’s field manuals).

The user’s main issue with the Challenger 2 tank model as it appears in the game is, as you might expect, a rather technical one, but it has important ramifications for the game. Apparently, the gap between base turret structure and the armour array on the tank’s frontal projection is too wide, and the user posted documentation meant to show that the gap on the real tank is much narrower. In short, the claim is that the Challenger 2’s mantlet (or armour housing around the main gun), is modeled incorrectly in War Thunder.

The use of potentially sensitive documents on the forum threw the moderators into a bit of a frenzy, and they have since deleted most of the relevant posts in the thread. It also, as UK Defence Journal points out, put Gaijin Entertainment into an awkward position – even if it’s true that the documents reveal an error in War Thunder’s Challenger 2 model, the studio cannot use classified information – no matter how it was obtained – to help develop the game.

A Gaijin forum moderator wrote that the company had received written confirmation from the UK Ministry of Defence that the documents posted indeed have not been declassified, and pointed out to the original poster that “By continuing to disseminate [the images] you are in violation of the Official Secrets Act as stated by the warning on the cover of the document, an offence which can carry up to a 14 year prison sentence if prosecuted.”

A War Thunder community manager explained: “We make it very clear that we will not handle any source material unless it is publicly available and fully declassified with the rights to prove that.”