There’s only so much of reality a game can simulate before you start bumping into practical concerns. If you didn’t have a UI readout to tell you how much ammo you have left, for example, you’re liable to run out of bullets in the middle of a gunfight.

That may sound appealing to a hard core of military sim enthusiasts who want their shooters as close to reality as possible, but it’s a recipe for frustration for the mass market. It’s why those UI readouts exist. This poses a quandary for VR game designers as it’s harder to sell a head-up display in virtual reality, which means it’s tricky enough to communicate such simple information as health and ammo. What if you’re making a VR MOBA?

Warfare Realm VR developer Arvi VR came to the same solution as Valve with Half-Life: Alyx, despite the greater density and complexity of information you need to see in a MOBA. Health and ability charges can be seen on devices on your hands, while information about your inventory can be found on your belt. It’s quite an adjustment even for you adaptable League or Dota players out there, but beneath the data readouts, you’re still playing a typical MOBA in which you try to take out your opponents’ base with the aid of AI ‘creeps’.

But why choose this genre – this complicated, combat- and movement-heavy genre – to try to convert into virtual reality? “It was the point of the project,” Arvi VR tells us. “The MOBA genre is popular, and it will be interesting to see that kind of gameplay from first person, with the maximum immersion possible.” Preserving that immersion – “the main benefit of VR”, in the team’s words – is the reason they chose to display information in the way that they did. 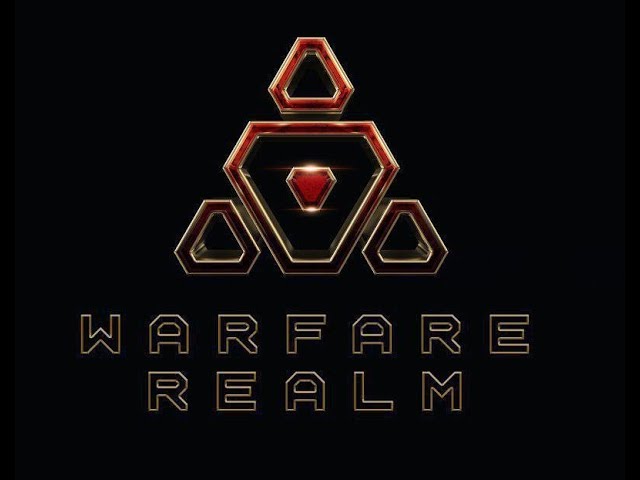 “Our goal was to minimise things that the player takes as unnatural, even things that are traditional in games, such as HUDs and inventory [screens]. VR gives the opportunity to interact with virtual objects in an intuitive way, like taking a bottle of health from the fountain and throwing it to your teammate, using a bow with your hands, focusing an ability with your eyesight, and so on. We’re not intending to reinvent the logic or mechanics of the MOBA genre, but to adapt them to this more immersive perspective. And that new experience is delivering a lot of fun!”

Read more: Check out the best MOBAs on PC

There’s one obstacle to maximising that fun which will be obvious to anyone who’s had much experience of VR: motion sickness. First-person VR games that involve a lot of activity or freeform movement, especially in three dimensions, are the most prone to this recurrent problem, which is a big headache to those trying to transfer lucrative action games to VR. How on earth is a first-person MOBA going to deal with this?

“Unfortunately, there is no ideal movement solution,” Arvi VR concedes. “So, the way for now is to make it easier for users to adapt to the differences in moving between the virtual and real worlds. Somewhere around 25% of players have issues with motion sickness using freeform movement. We address those issues by providing a teleport movement mode for players to test and choose in the lobby, before a match starts.” 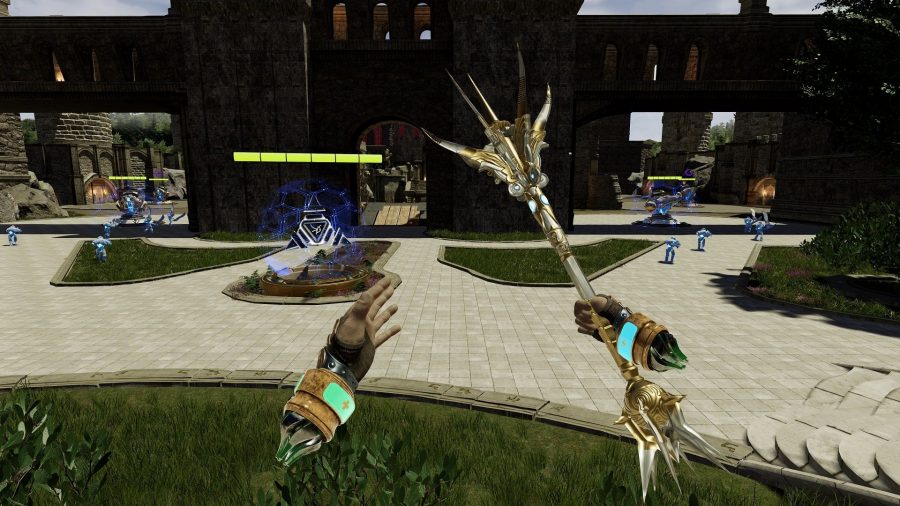 Teleporting is the most widely used solution for first-person VR games and minimises the sensation of motion sickness, but obviously enough it can’t be adapted directly to a multiplayer game in which freeform movement is an option – teleporting players would have a huge advantage. When teleporting in Warfare Realm, “the player directs their avatar as they choose, and the avatar uses freeform movement to get there,” explains Arvi.

Players gestured with controllers to trigger hero abilities, but after 20-30 minutes they were exhausted

“The benefit is that users with different movement can share the same session – you can’t even tell which movement others are using because there’s no difference in how their avatars move. Those that have no issues with motion sickness can fully enjoy the action. Strafing, jumping off cliffs – there were even requests to make temporary levitation or launching abilities!”

There is a drawback, however, which is that players can’t attack or use other actions while their avatar is completing its teleport move. That seems like a pretty big deal in a MOBA, but the switch to first-person seems likely to bring a change in pace compared with the traditional top-down perspective, in which maps can afford to be more compact and thus encounters are more hectic. 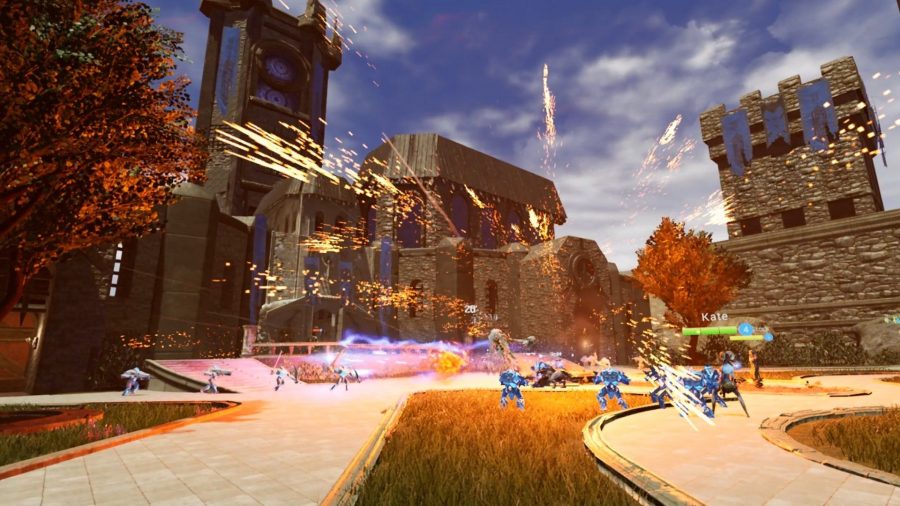 Or as hectic as they can be when you’re just sitting down, anyway. From the perspective of real, physical exhaustion, almost any VR game will be more tiring than a traditional one – especially one like Warfare Realm, which seeks to take full advantage of the medium.

And yet, as we said, realism must bow at the altar of pragmatism at some point: “At the design stage there were ideas like players using gestures with controllers to trigger hero abilities, but after 20-30 minutes even experienced players were exhausted,” the devs say. Further testing found that throwing objects to teammates is tough for those new to VR, and that without some degree of homing, “the main attack projectile was useless in PvP.”

Related: Check out the best VR games on PC

To solve problems like these, it wasn’t enough to have a leading set of development tools to work with out of the box, but for their chosen engine to work seamlessly with purpose-built code. “Unreal Engine 4 works great from that point of view,” Arvi VR says. The engine’s legacy in having built “a large number of A-class products” was another selling point, especially since so many of those products were multiplayer action games, meaning Unreal offered “a mature multiplayer framework with a large set of features that are easy to use out of the box. 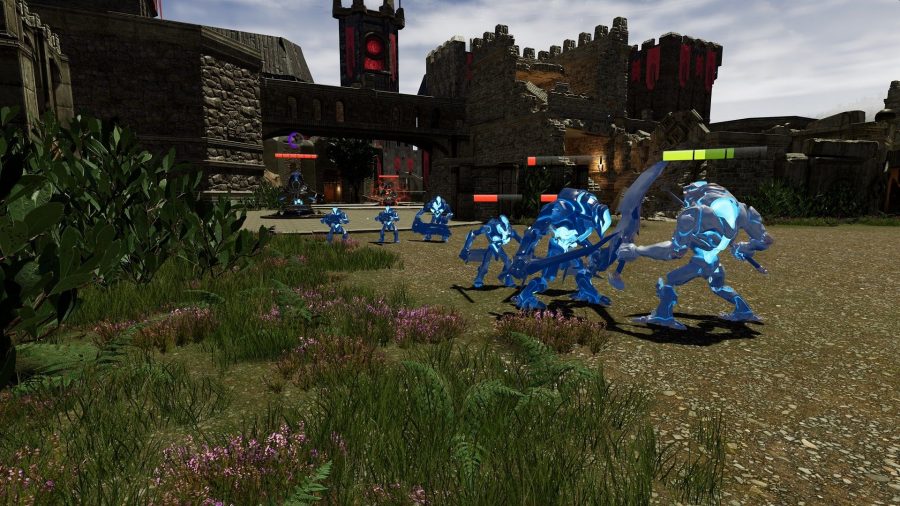 Arvi VR also praises Unreal’s Blueprints (a visual scripting tool ensuring even non-programmers can contribute to the code base), wide support for the most popular platforms – including VR ones – full access to the source code, and its ecosystem of support, which features an asset creation marketplace and a community ready to help fellow developers. Overall, the team is impressed at how Unreal Engine 4 has been able to adapt to its particular needs.

“Unreal Engine has a very good level of flexibility to override behaviour and to setup settings for its framework objects,” says Arvi VR. “So, using them as a basis, there was no need for us to patch engine source code with our modifications. We only had to add our custom code based on engine code, and that’s really great!”

In this sponsored series, we’re looking at how game developers are taking advantage of Unreal Engine 4 to create a new generation of PC games. With thanks to Epic Games and Arvi VR.