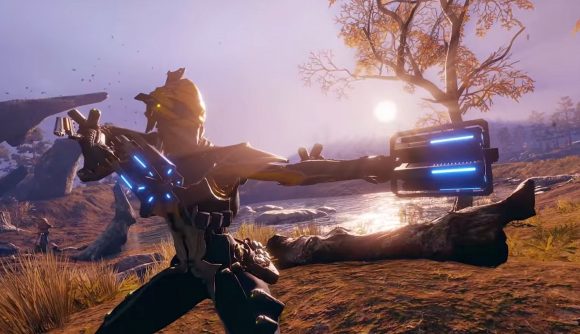 Warframe has been rumbling on for more than six years, and shows no signs of slowing down. But for Sheldon Carter, COO of developer Digital Extremes, maintaining that kind of momentum means learning to “value your time.”

In an interview with PCGamesN during Warframe’s annual conference, TennoCon, last week, Carter said that “it’s kind of crazy, but the only hard date we have in a year, for us, is TennoCon. It’s the only thing we can’t move. Everything else we feel like we have control over, so we can work as hard or as easy as we need to meet the goals.”

According to Carter, that’s thanks in part to the fact that developer Digital Extremes has “a really great relationship with our community. They tell us when they’re hungry. We take that pressure seriously and we try to meet it. But also, a game like Warframe, it’s a marathon not a sprint. And for the development team, if we have a sprint mentality, we’re not going to have a development team.”

“So we have to treat it like a marathon, with the one hard date being [Tennocon],” which Carter says is the one thing that the studio can’t change the schedule around. He says that the conference “sometimes makes us feel like it’s the place that we have to put more of a push on, but everyone understands what that’s about, and it’s about connecting with our fans, and a lot of other things. Outside of that, dates are fluid.”

Blast off: You can win a trip to space, just by playing Warframe

Given how busy TennoCon was, Carter’s take on the situation is refreshing. The conference shone the light on everything from a new frame, a new story quest, and even a new intro cinematic, and that’s far from an exhaustive list of everything fans were treated to last week. With all that in mind, it’s good to know that the studio’s schedule has a little room for flexibility.