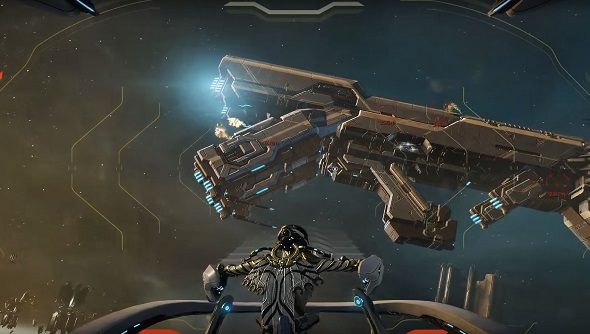 Some of the biggest news out of Warframe’s Tennocon this weekend was Railjack, the forthcoming expansion that will allow teams of Tenno to crew warships and take them into interplanetary combat. Once you’ve got your own ship, you’ll be able to give it the Warframe treatment and customise the heck out of it.

Warframe creative director Steve Sinclair tells us that Railjack’s ships will be fully customisable, right down to engines and hull colour, and that Digital Extremes plans on adding more down the line.

“Warframe is all about customisation, so yeah, you’ll be able to deck out your ship however you want,” Sinclair said. “We’re a looter shooter, which means we have progression curves in everything.”

Get ready for Warframe’s Railjack with our list of the best space games on PC.

In Warframe, just about every main piece of equipment you can carry can be tinkered with, and Sinclair says Railjack’s warships won’t be an exception.

“What kind of reactor do you have [in your ship]? What kind of weapons systems do you have and do you swap them out or upgrade them?” he says. “Do you want to paint your ship a different colour? All of those things are in development for sure.”

Sinclair says Digital Extremes has tried to be careful not to overload players with what they’re offering in Railjack, though. Warframes themselves take a lot of time and effort to upgrade and tune to exact specifications, and the team doesn’t want players frustrated by the process of sinking a lot of energy into one ship and then being presented with a ton of new options later on. But while Railjack will initially launch with one warship, the plan remains to eventually add additional models.

“The tricky thing is we don’t want to ask players to deeply invest in one thing and then say, ‘Here’s another one,’” SInclair says. “We want to do that [add additional ships in Railjack], but it took a hell of a lot of effort to get this one ship.”

Ships in Railjack will be more customisable than ships you might find in Elite Dangerous or Star Citizen, according to Sinclair, but there won’t be the focus on creating a vast selection of ship designs and models.

Sinclair says we can expect to see Railjack out by the end of the year.