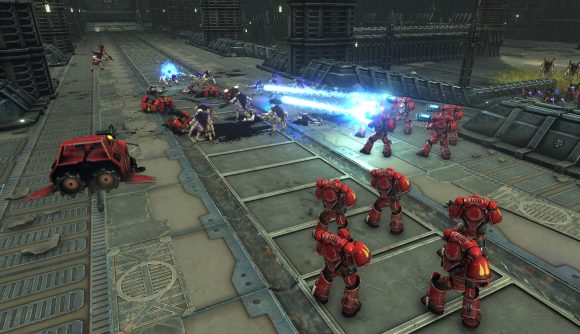 The history of Warhammer games, even Warhammer 40K games, has been a bit mixed, but the future looks bright. Warhammer 40,000: Battlesector, a skirmish-level turn-based strategy game, forms part of this new optimistic outlook, especially as it’s from the creators of the excellent Battlestar Galactica Deadlock.

While it’s not the space-based fleet clashes that the studio has become experts in, Battlesector is still shaping up to be one of the most promising Warhammer 40K strategy games of recent years. Being turn-based, it won’t have the atmosphere of Dawn of War, but the way developer Black Lab Games has designed this experience really captures the essence of the tabletop game.

We were unofficially expecting it to drop sometime this month, but the release date has now been formally set for mid-July. Pre-orders are already available and you can reserve your copy for a 10% discount if you decide to jump in early. If you want to wait to see more of the game in action first, Slitherine will be showing new footage during the Home of Wargamers event later today on the company’s Twitch channel.

Distant Worlds 2 and Startship Troopers: Terran Command will also be on show during the event, along with some new game reveals we’ll be talking more about later today.

Warhammer 40,000: Battlesector will release on PC via Steam, GOG.com and the Slitherine store for $35.99. Pre-orders are available now.