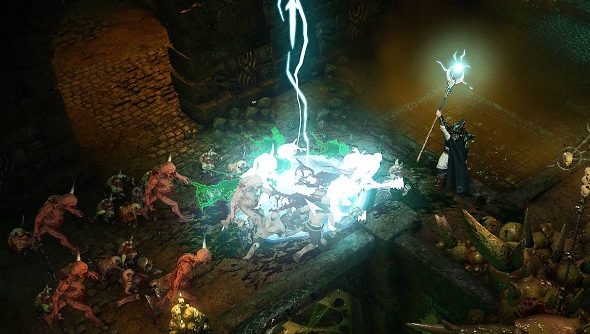 Tabletops may live in the Age of Sigmar now, but Warhammer: Chaosbane is more proof that Warhammer Fantasy still persists in videogames. Bigben announced the title today, and provided a couple screenshots to pore over while we wait for more details.

Warhammer: Chaosbane is a Diablo-style action-RPG, and is the first one set in the Warhammer Fantasy universe. Bigben says you’ll be able to play as a human, high elf, wood elf, or dwarf as you fight Chaos corruption in the Old World (spoilers: this doesn’t end well). You’ll be able to visit some well-known Old World locations, such as the former Empire capital of Nuln and Praag, a northern city afflicted with a Chaos plague.

The two gameplay screenshots provide a sense of the isometric perspective, and they’re both full of pulsating, pointy Chaos corruption. The human character in gold armor appears to be a Captain of the Empire, who presumably will fill the standard sword-and-board role. He’s fighting Bloodletters, which are minor demons of the god Khorne.

Another shot shows the high elf, who is clearly a mage, fighting in a sewer environment choked with an oozing mucous substance. That’s more Nurgle’s aesthetic, so Chaosbane already seems to be setting players up against two of the four Chaos gods. Tzeentch and Slaanesh would round out the rotten pantheon. 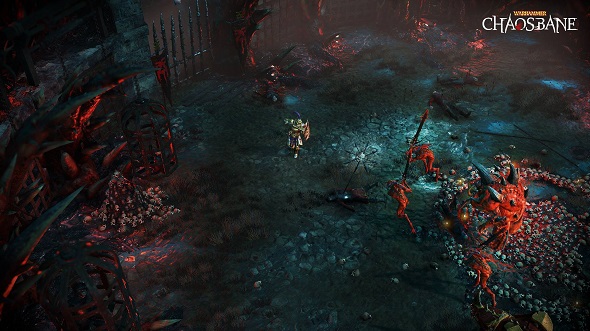 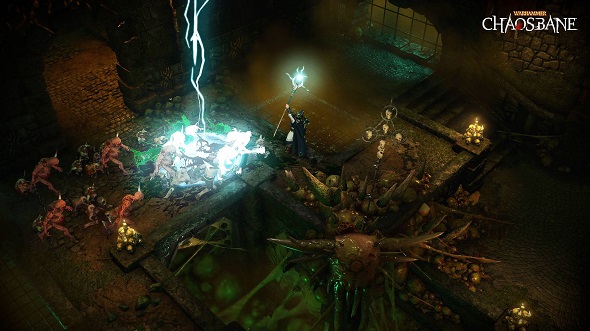 Warhammer: Chaosbane is being developed by Eko Software, the studio behind the How To Survive games. There’s no release date set yet and no word on multiplayer options, but Bigben says we’ll be able to see Chaosbane in action at E3.