Have you discovered any Watch Dogs Legion easter eggs? There are plenty to find in Ubisoft’s open-world game. Some are fun nods to previous Ubisoft titles, others tie into London’s rich culture, and at least one will give you the creeps.

You could spend days scouring London’s streets to find Watch Dogs Legion easter eggs, so we thought we would help you out. We have compiled 11 of the best and weirdest secrets in Watch Dogs Legion, so you don’t have to put in the hours to locate them.

It should be noted that there isn’t an achievement or trophy tied to finding these easter eggs. They are just a bit of fun on Ubisoft’s part, and it is enjoyable when you do stumble across one. If you want to do some exploring between missions and hunting down the best recruits in Watch Dogs Legion, we suggest that you go and find these easter eggs and secrets. 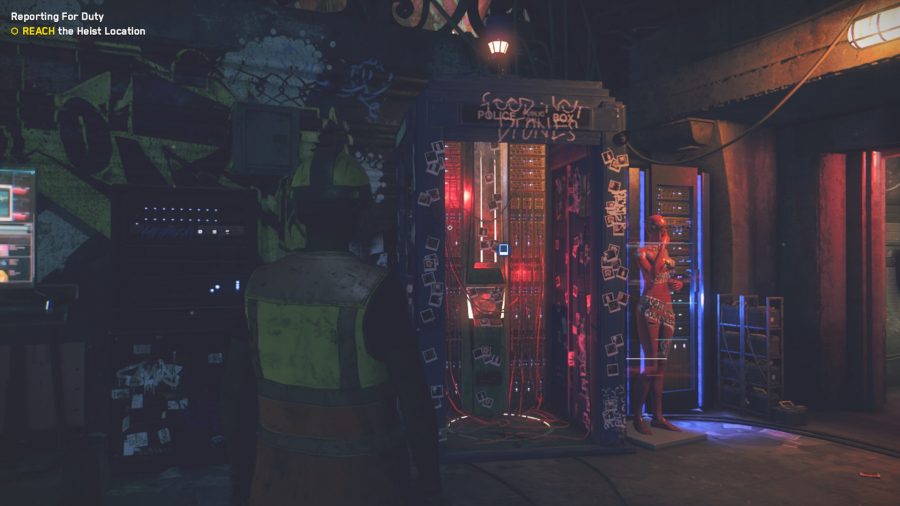 An easy one to start off with. After gaining access to DedSec’s headquarters, you have to bring Bagley back online. Before you do, look left if you’re facing Bagley’s interface. You’ll spot a familiar looking blue police box masquerading as a photobooth. Yep, it’s none other than the TARDIS, Doctor Who’s famous time-travelling ship. 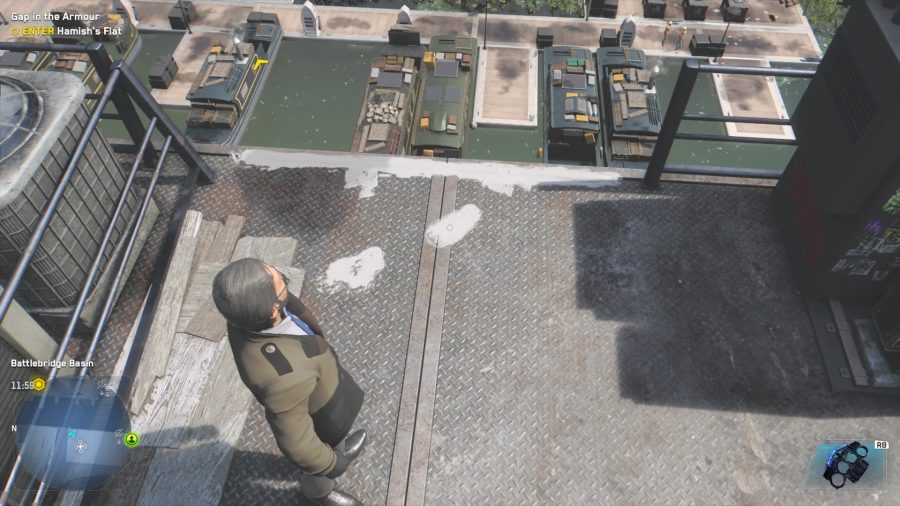 This is one you’ll definitely encounter. During the ‘Gap in the Armour’ mission, you have to hack into the apartment of an ex-Albion employee. Once you have disabled their traps, you must dive into the river below and swim to their flat. The only way to do this is to perform a Leap of Faith from the rooftop. This is an obvious nod to the Assassin’s Creed series, and you’ll get an eagle call sound as you dive for good measure. 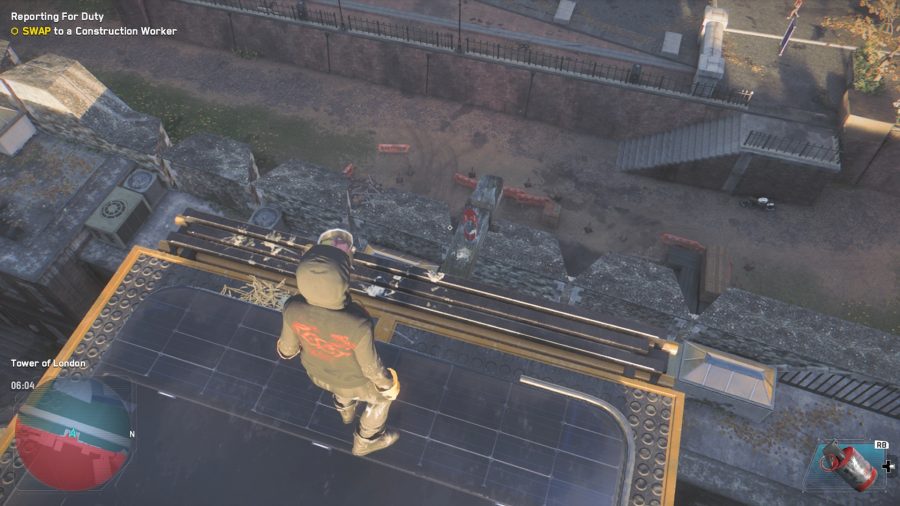 Head to the Tower of London, which you can find in the City of London region next to Tower Bridge. Clear out any guards and climb to the top. There are ladders, boxes, and walls to clamber up, so you can get up there without any problems. Head to a nearby cargo drone pad and you’ll see a wooden perch with a single red shot next to it. The footwear is eerily similar to those worn by Mirror’s Edge protagonist Faith. If you head underneath the perch – don’t jump down or you’ll incapacitate your character – you’ll see the other shoe and dried blood. Not everyone is graceful at performing Leap of Faith moves, it seems. 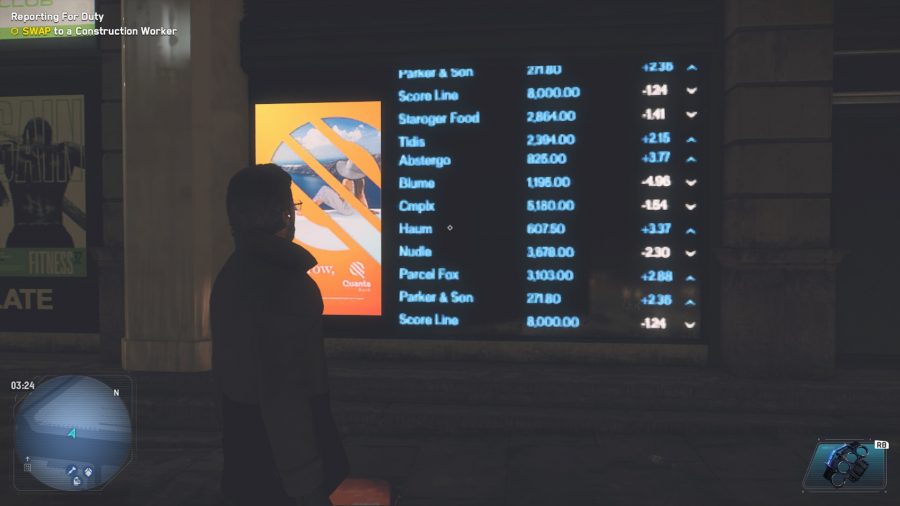 That isn’t the only Assassin’s Creed secret in Legion. Head to any big Quanta Bank and look at the digital shares listing boards outside. Eagle-eyed fans will spot the name ‘Abstergo’, which is a callback to the modern-day front of the Templar Order. Others will also note the name ‘Nudle’, which is the equivalent to Google in Watch Dogs 2. 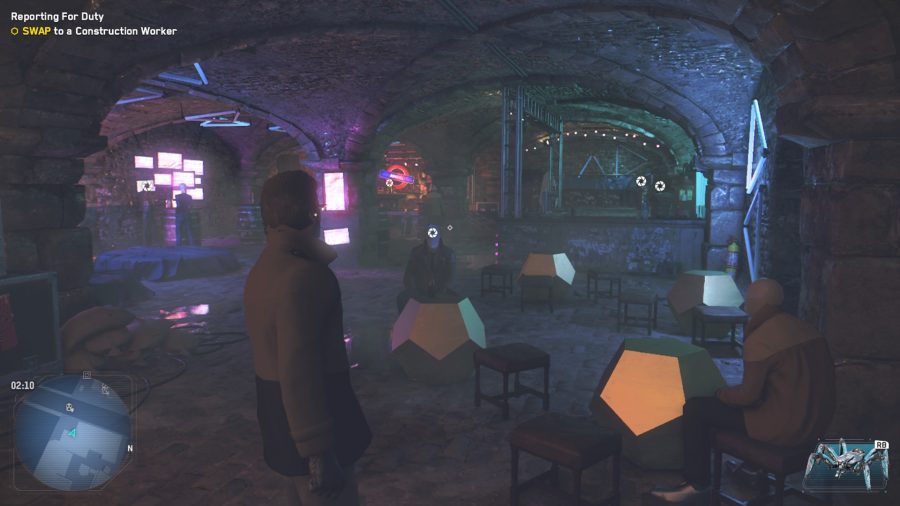 Speaking of the Watch Dogs franchise, head to London Bridge and enter the nearby Roberts and Scott hall building. Hack the drone on the table and fly to the level above, peek behind a red curtain, and download the security key. Use this to access a ctOS terminal behind a locked door. You’ll get transported to an underground DJ party. Look around to find a poster with Defalt’s signature logo on it, which suggests Watch Dogs’ DLC antagonist isn’t as dead as he appears.

Use the cameras and computers to hack into the DJ booth, and it will tell you to come back at 2 AM. Leave the building and head right. Find the third ladder on your left – between two railings – that leads into the Thames. At 2 AM, climb down the ladder, swim left, and enter the party through a sewer. If you do, you can head to the DJ booth and grab a special Defalt mask. 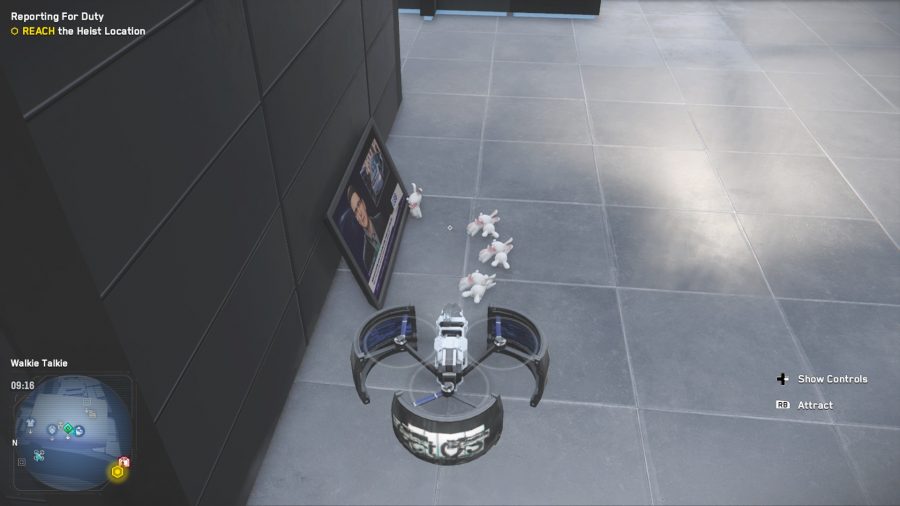 Another secret near to the Tower of London. Look for a glass building with an orange hologram of Albion’s logo on it. Use a cargo drone to ascend as high as possible, and then hack into a nearby drone. Fly to the top of the building, and look for double doors that you can enter. You will see a TV on the floor with Raving Rabbid models watching it. 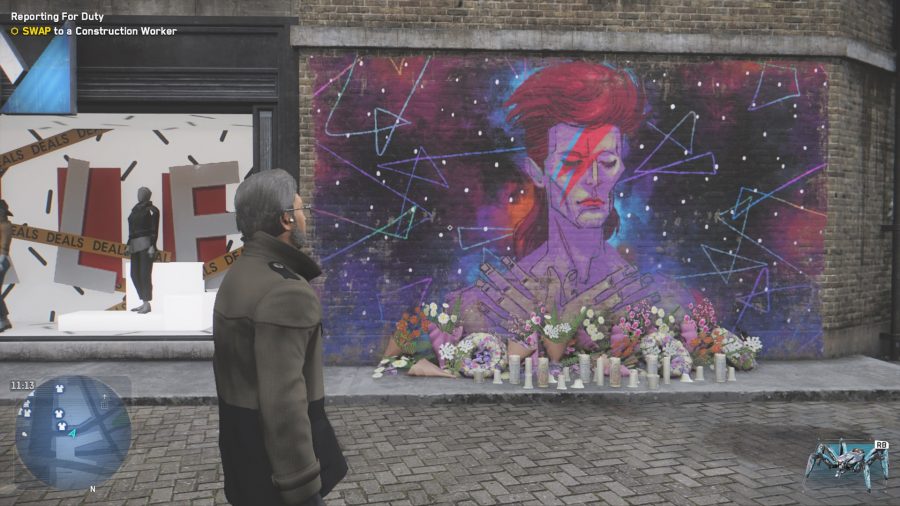 Fast travel to Brixton’s underground station. From the exit, look across the road to locate a Union Jack structure between two buildings. Cross the road and look on the wall to your left for a poignant mural to the iconic singer-songwriter and actor. 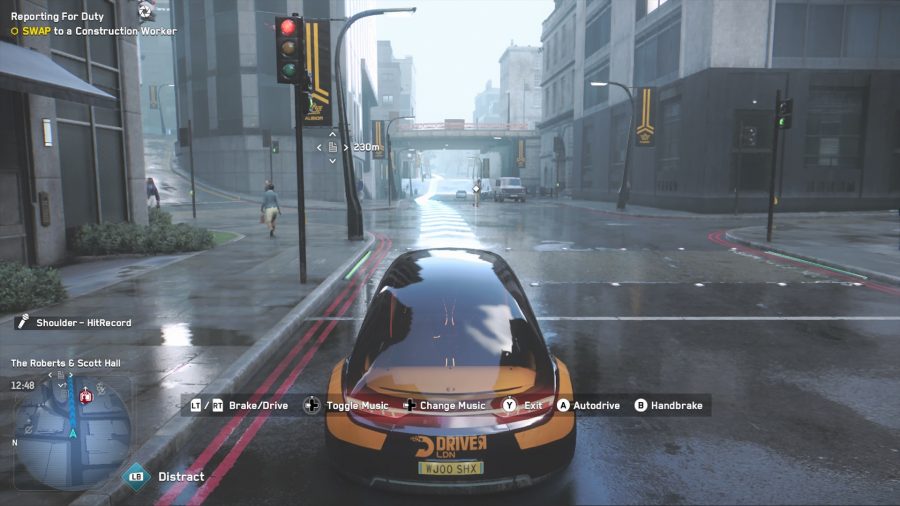 As you explore London, you can drive any of the automated cars that patrol the city’s roads. Jump into one of the futuristic looking vehicles, and you’ll notice the word ‘Driver’ on the back. This is a reference to the Driver San Francisco app in Watch Dogs 2, which allowed you to conduct side missions by picking up pedestrians and driving them to their destinations. 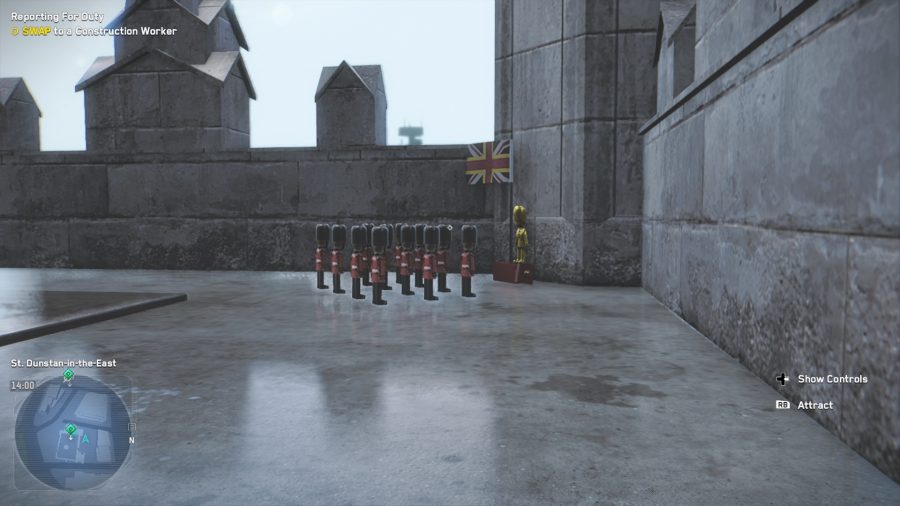 Locate the St. Dunstan-in-the-East church halfway between London Bridge and the Tower of London. Commandeer a drone and fly to the top of its spire. Head inside to see wooden figures of the Queen’s Guard carrying out a routine check. 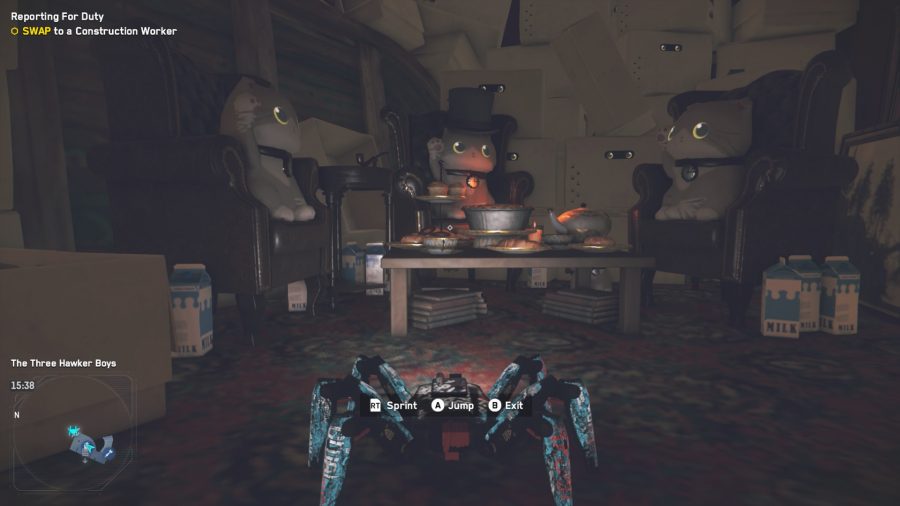 Cross London Bridge into Southwark. Enter the Three Hawkers Boys pub, which is on your right as you leave London Bridge. Go upstairs and deploy a spider-bot drone. Hijack it and head under the fireplace to reveal a secret room full of porcelain cats having a tea party. There’s a map with paws on it too, which hint at other hidden cat locations. 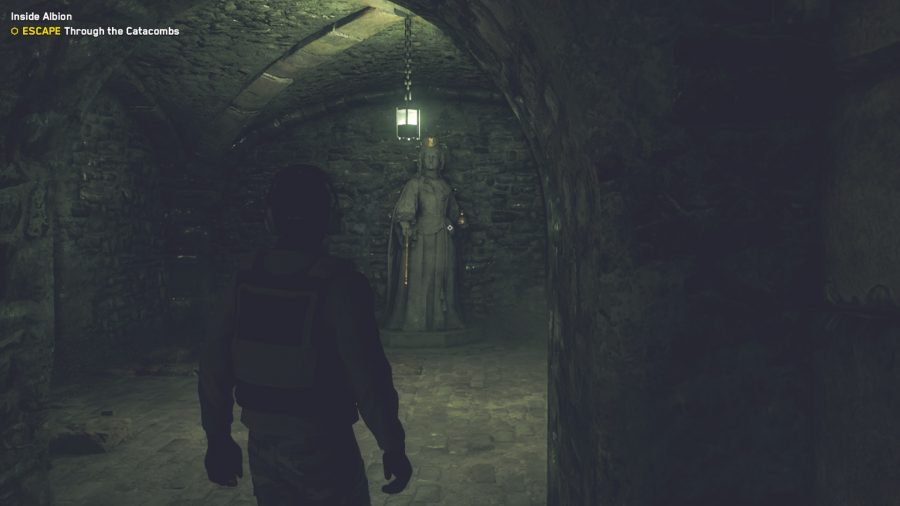 We’ve saved the creepiest Watch Dogs Legion secret until last. During the ‘Inside Albion’ mission, you must escape through the catacombs. You’ll stumble upon a Queen Victoria statue, and exiting and entering different doorways causes the statue’s head to move to keep tabs on you. Stand next to it and you’ll hear a woman sobbing. Given that real-life prisoners were held, tortured, and executed in the catacombs, it’s a spooky moment in an otherwise humorous game.