It’s as inoffensive a pre-dawn morning as you could hope for in Watch Dogs Legion’s near-future dystopian London. It’s past 3am, but because this is a videogame and NPCs need to maintain unrealistic schedules so I can complete quests, a crowd is milling about outside a pub as if post-work pints have just run a little late.

That’s a ritual familiar to me from a year of living and working in the capital, and I get a mostly bitter, slightly sweet flashback to my former life as a stressed-out account exec in Oxford Circus, literally rubbing shoulders with colleagues as we queue for service in an uncomfortably crowded pub. Put me about three miles east with a pint in hand, and one of these people could be me.

This sense of déjà vu as I drive around Ubisoft Toronto’s recreation of London, half recognising not just the big landmarks but the pubs, the offices, and even the sounds – the constant hum of traffic and burble of mixed accents – is uncanny. But it’s even more impressive that Legion’s sense of authenticity holds when things get silly.

A whirr of rotors disturbs the evening air – distantly at first, imperceptible beneath the conversation and laughter, but when you can feel the downdraft on the back of your neck it’s pretty hard to ignore. A cargo drone as big as a dining table flies low over the crowd, bound for the pub’s manager. A small-fry politician from City Hall with black-rimmed glasses and a hipster beard jumps off its back. A woman exclaims in a Jafaican accent, “that is the stupidest and most attractive person I’ve ever seen”. 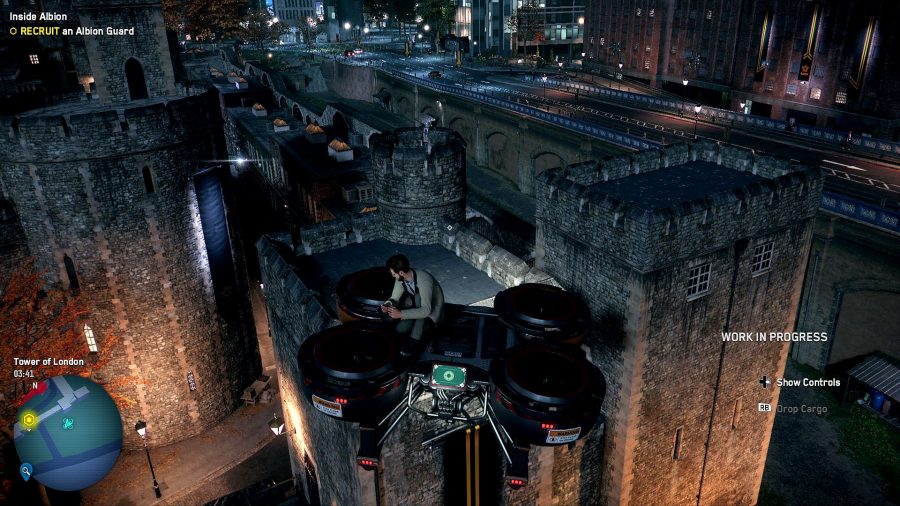 I walk up to the pub’s manager, Michelle, who tips me to a disgruntled guard at the Tower of London. The biggest of Legion’s headline-grabbing big ideas is that you can convince practically any of London’s citizens to join the series’ hacker collective DedSec – now reimagined as a resistance movement against Albion, a private military company – and then play as them. (Here’s our interview with creative director Clint Hocking about how Ubisoft is pulling off this remarkable trick.)

After a series of bombings – for which DedSec has been framed – panicked politicians have all but handed London over to Albion and the city is a police state, administered not by the government but by a corporation. Discovering who really organised the bombings is the game’s main goal, and since Albion has benefitted most, it’s our top suspect. My current quest line has me chatting to Michelle about recruiting someone on the inside so we can investigate.

Read more: Check out the best sandbox games on PC in 2020

This is all very well but in the back of my mind I’m worried that my drone is about to fly off or despawn while we’re talking. You’re actively hacking the drone while piloting it, you see, so your interactions are annoyingly limited. You can’t initiate or conduct conversations and you can’t shoot, thus ruining certain very niche power fantasies I’m suddenly having, like swooping into a pub and chinning a pint like an alcoholic Green Goblin (whoever you play as, everyone can down a beer in three seconds flat and no bartender ever charges them, which, in central London, might be the greatest power fantasy ever seen in a game). 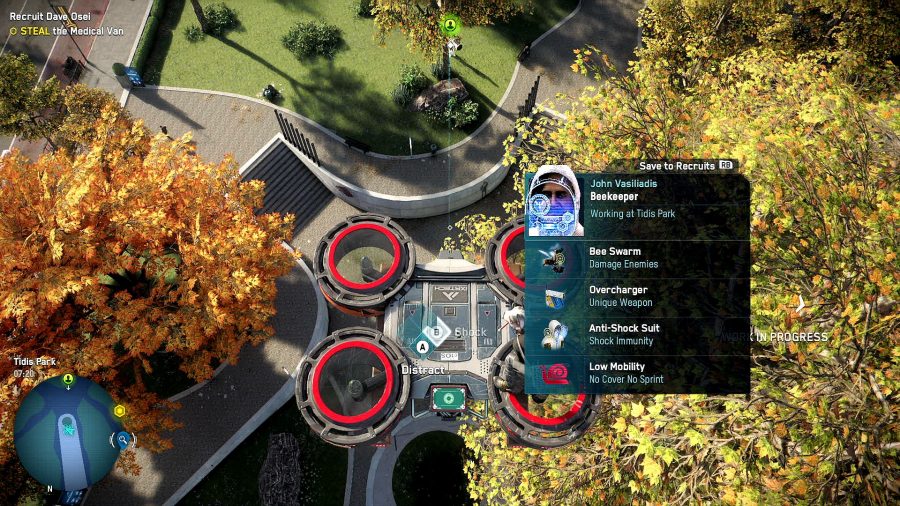 I didn’t know I wanted this kind of thing from Legion, but then Ubisoft went and put rideable drones in it without also letting me drop stuff from them while flying over busy intersections (nothing fatal, mind – something soft and annoying, like paint. Or Orlando Bloom), so here we are.

That’s not to say you can’t still have some fun, though. The flight to my next destination could be boring since it takes me over the largely featureless river, but for a few things: first, I’m mid-hack, so the hacking interface is open to me. Secondly, most vehicles are automated. Thirdly, boats are vehicles.

Like every citizen you play who discovers an ability to crack every electronic device under the sun with only a smartphone (I believe the in-universe explanation for this is the aid of Bagley, your amusingly caustic AI), my hipster politician marvels at his own skills as I hack everything in sight. I crash two Albion Cruisers into one another, forcibly setting them on a collision course. Swooping low over Tower Bridge, I electrocute an Albion guard with his own phone. I propel a docked yacht into a ramp that has been conveniently left there by a kindred anarchic spirit in Ubisoft’s level design department, launching it over a fence to its fiery doom. 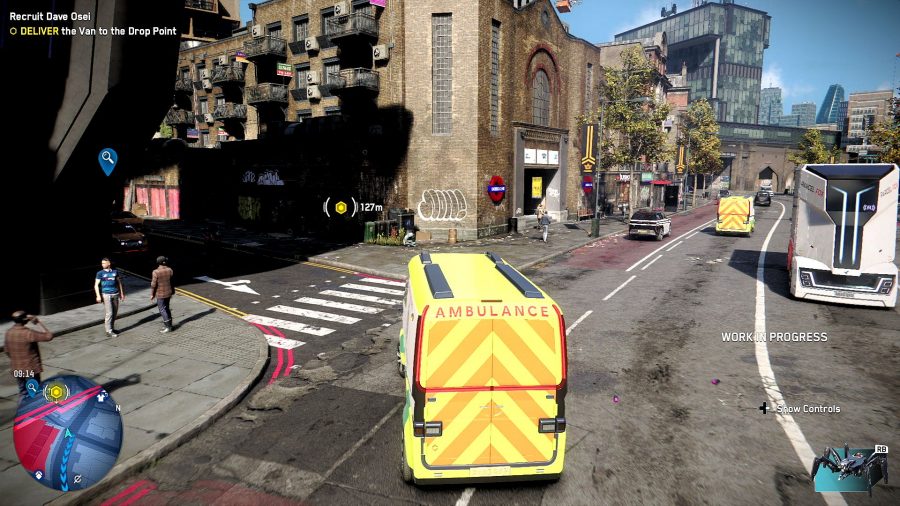 I sow similar chaos among the gangster thugs guarding the Southwark warehouse I’m scoping out, but your godlike hacking powers can also be used in a more considered way. You can scout secure locations by bouncing around their own cameras, perhaps tagging a promising recruitment candidate, disabling a security system, or taking out guards by arming a few strangely ubiquitous electric traps. I did all of the above but without any great subtlety, cackling as my hipster flew around the warehouse roof ramming cars into walls and electrocuting guards left and right. It was great fun until, inexplicably, someone got suspicious.

I’m serious, by the way. I was careful not to fly my drone into the red-marked restricted area, so when everything inside the gang’s secure warehouse starts blowing up, I’m not sure exactly how they know to shoot the stranger texting madly on a large cargo drone hovering outside their window. Someone jumped the gun there, I think, and I feel aggrieved. 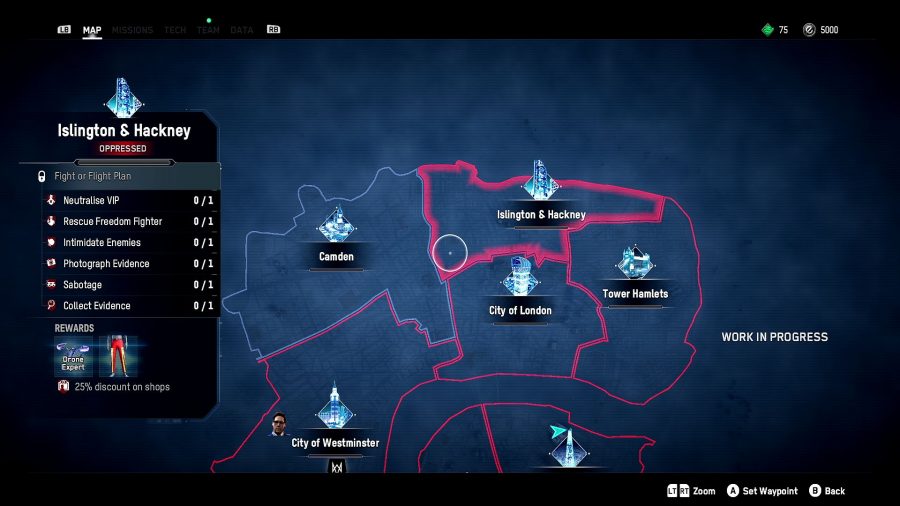 At least the penalty for ‘death’ (or arrest) is well-judged: you simply insta-switch to a different operative while your previous vessel spends about 30 minutes in hospital (or prison). It’s annoying enough to deter sloppy play, but not so annoying (or permanent) that you’ll get too upset. Indeed, being forced into a new operative has the enjoyable upside of figuring out what they can do, for London’s citizens are multi-skilled.

There are Bond-inspired spies who bring such high tech gadgets as invisible sports cars with missile launchers; builders who can summon those handy cargo drones at any time; and street artists with paintball guns who spray paint bad guys in the face when taking them down. A Hitman-esque uniform-based access system raises further tantalising possibilities: by hacking into MI6 I recruit a Grenadier Guard whose famous red coat and bearskin hat can get me into Buckingham Palace. Maybe I can hack a corgi somehow.

You’ll have your favourites, but they each bring something to the team, and this is where Legion’s game design strengthens its narrative themes. You are building a movement of humble, courageous Londoners to fight back against a greedy, oppressive regime, and their diverse abilities are reflected in their backgrounds: my spy is a wealthy, plummy voiced white male, my street artist a black teenage girl. This is a unifying game, in which mass fear and political cowardice has opened the door to an enemy who we must all come together to resist. 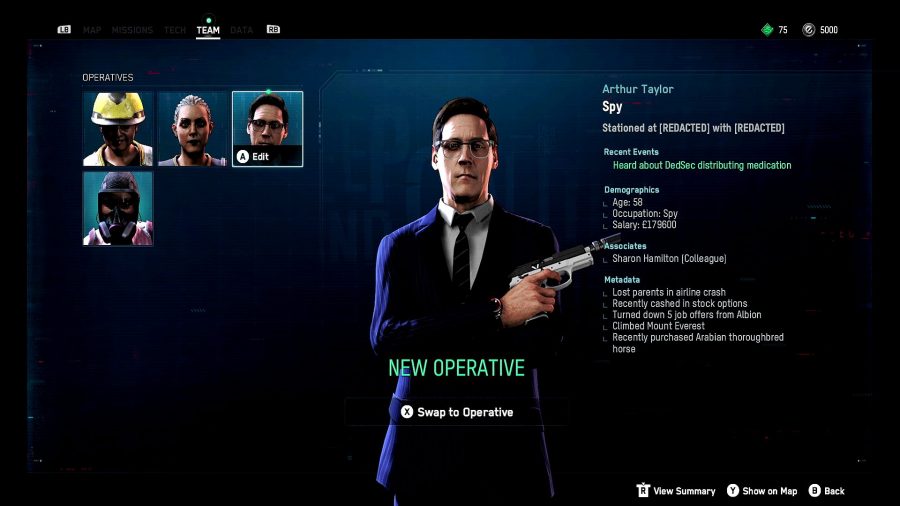 It’s hardly an optimistic premise, but it sure is timely, and motivating. There’s something uniquely appalling about power wielded without accountability, especially wearing a mask of peace or justice. Anyone who cares for the UK’s capital city will feel doubly stung: it’s striking to see such iconic monuments as Big Ben, the London Eye, or the Shard recreated with such fidelity, but also besmirched by Albion’s logo.

It’s too soon to say whether Ubisoft has actually stuck the landing on Legion’s themes, but in casting the CEO of a private army as a central villain and in game director Clint Hocking’s comments last year, the publisher may finally be ready to kick its lamentable – and intentional – policy of exploiting politically charged settings without taking any position of substance on the issues that make them so dramatic. Let’s hope.

Related: Check out the best open world games on PC

Watch Dogs Legion is far from immune to the little frustrations of Ubi’s open worlds. The cover system feels too ‘sticky’, it was often unclear which rules I broke to get detected and how, and though the uniform access system is cool it also reintroduces insta-fail stealth sections. Then there are nuisances all-new to Legion, like not being able to do everything I want from atop a drone, or said drones flying too slowly. (Ok, so many of my complaints are drone-based.) But so far its setting, its unique promise of recruiting a resistance of ordinary people, and most of all its apparent willingness to engage with its highly relevant premise, are looking every bit as powerful as they sound.