I’m somewhen in my 70s, wearing a pig mask in the middle of London, and I’ve just tasered someone in the kidneys. It’s rare for a game to accurately reflect your ten-year plan, but by golly Ubisoft, three out of four ain’t bad. I should be able to act out plenty of other life goals thanks to the sheer diversity of Watch Dogs: Legion’s cast, too – you can play as any NPC you like, if you weren’t already aware.

Legion is a work from the same strand of disorienting ambition that defines No Man’s Sky – a feat of technical gymnastics that, while entirely feasible once you understand the shortcuts and algorithms at work below the surface, feels impossible in scope on first approach.

For example, the unfortunate woman whose organs I’m sautéing is the victim of my efforts to bring the man she is harassing around to joining hacking collective DedSec. He believes that the organisation is incautious when meting out justice, so I’m disproving that by beating up his attacker without initially looking any further into the situation.

It turns out my hot-headed response is outweighed by his relief at being defended, though, and when I next profile him he’s more willing to talk. That’s not the end of the story for the kidney lady, however. She was already on poor terms with DedSec as she works for less savoury employers – as a paid goon sent to hassle anyone they deem a problem – and her defeat at the hands of my blue-rinsed septuagenarian agent has not helped her warm to the cause. 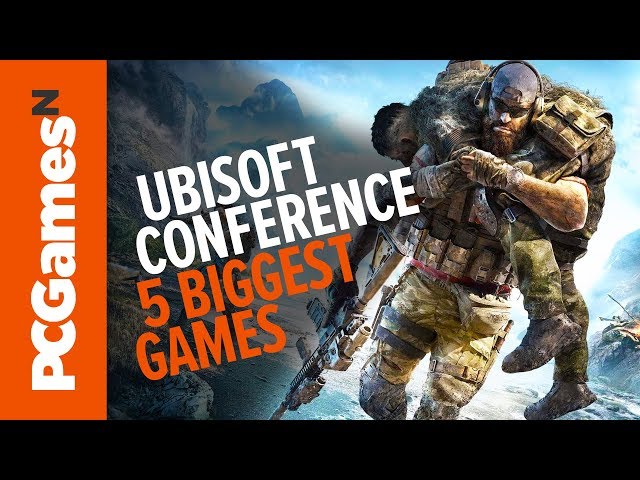 But a little digging into her personal life reveals that her father needs urgent medical care. No bother – I hack the systems of the hospital he’s staying at and prioritise treatment. Kidney lady is still a bit angry about the bruises and burns, but when I catch her leaving the health care institution – after, I might add, a particularly inelegant descent down a drainpipe hampered by my pleated wool skirt – she begrudgingly admits that she’s the victim of blackmail. With that, I have a recruitment mission to wipe some records from inside Scotland Yard and… well, gosh; how deep does all of this go?

It’s just a surface skim of the full game, but already the daisy chaining possibilities of Legion’s interpersonal relationships seem dizzying. I can switch between any of the people in my group, and I can hire anyone I like. All of them have a unique backstory, job, hobbies, and needs. How on Earth is all of this achieved?

“There’s a lot of content, and there are a lot of procedural systems,” creative director Clint Hocking explains when I put much the same question to him. “And those things are working together to give us really well-curated characters and an enormous amount of diversity. 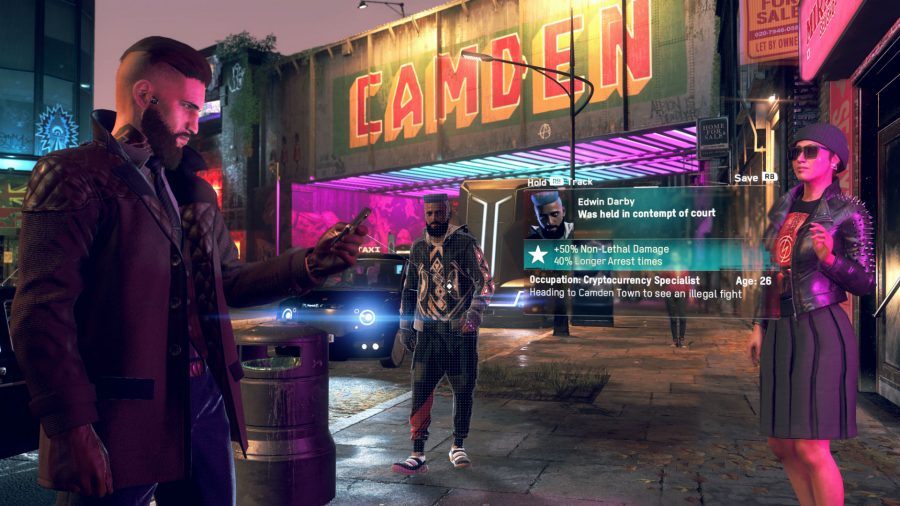 “At the core of everything is a relational database called Census. You see a bin man on the street – he’s nothing. He’s just like a bin man in any other game, except when you profile him we’re able to look into that database and go, ‘well, he’s wearing the clothes of a bin man, so that’s his job. It’s three o’clock in the afternoon, so he works between noon and 8pm. And as he’s a bin man he makes a certain amount of money, so he can afford to live in these particular areas.”

Legion is a quantum sea of possibilities, finality only settled on when you observe an occupant of its near-future London

Hocking’s explanation suggests Legion is a quantum sea of possibilities, finality only settled on when you observe an occupant of its world. “From that, we pick one of the neighbourhoods he could afford,” he continues. “We already decided his ethnicity when we spawned him, but he’ll be more likely to have certain kinds of hobbies depending on where he lives. Then there’s some random procedural stuff in there that figures out what kind of education he has, what interests… and we just build it out from there. That’s how we generate a character.”

Layered on this foundation are Legion’s ‘narrative personas’. That bin man’s father might have been detained by Albion – the PMC which polices London in Legion’s near-future setting – and breaking him out could represent the recruitment mission for bringing our refuse expert into the DedSec fold. But it could equally be a granny or politician who needs your help, and they will discuss their version of the same mission in different ways depending on who they are. Hocking is keen to stress that the game’s entire script has not only been recorded multiple times by a number of different actors, but broadly rewritten for a wide range of different personas as well. 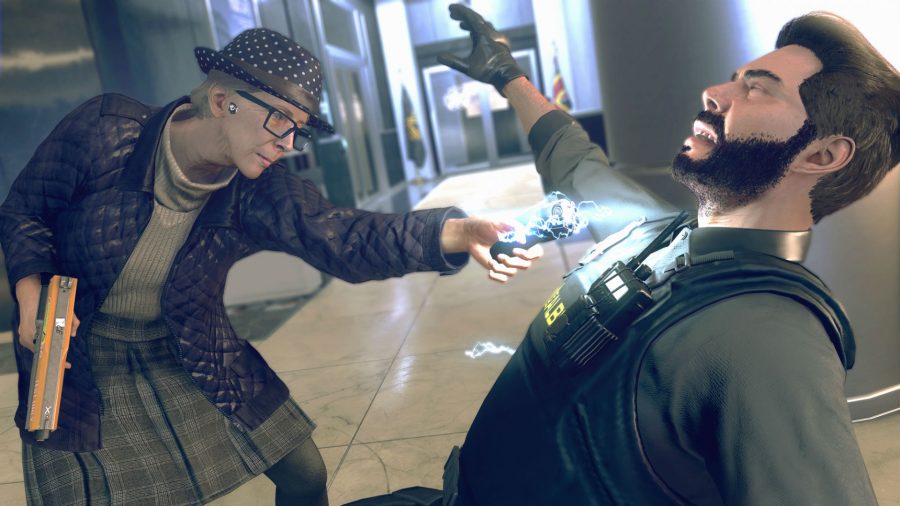 “Maybe the same mission is the politician telling you that the field agent who’s been secretly working for him has been detained, and you need to go rescue her,” Hocking elaborates. “Maybe the bin man is talking about how his brother has gotten in trouble with a crime family and is being held here. The persona allows us to change, to some extent, the context of the mission, and dynamic casting allows it to take place in different locations in the world.”

It’s a fascinating blend of craft and maths, then, but Hocking won’t be drawn on the specifics of the project when my curiosity leads me to ask how many lines of dialogue have been recorded.

“I don’t want to give hard numbers, because they’re really subjective,” he tactfully replies. “There are hard numbers – the number of actors we recorded, for example – but what you have to understand is that you could have that bin man asking you to rescue his brother, and those two characters could have the same actor, but then we use voice modulation at run time and if you were to hear them talk to each other you wouldn’t know it’s the same person.

“So really, while there are limited numbers everywhere, the meaningful differences approach the infinite.”