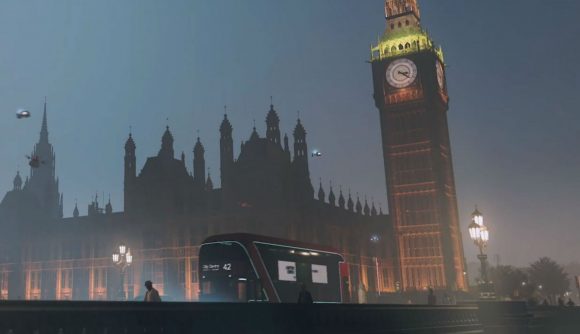 Watch Dogs: Legion has one of the bleakest storylines of all the games announced at E3 this year. Ubisoft’s open world game is set in a near-future, post-Brexit London, and tackles the many problems of living in a technologically infused society. Although Ubisoft has addressed the use of politics in its games in the past, game director, Clint Hocking, says that Watch Dogs Legion will not turn away from the politics of the setting, explaining that the game “definitely has something to say.”

Speaking with PCGN, Hocking explained his stance regarding Watch Dogs Legion’s political setting. “Ubisoft as a company has its position,” Hocking says. “But every project has its own operational reality and its own stuff and Ubisoft’s position has a guideline for all of us to follow and our game definitely has something to say and we’re happy to say it.”

At Ubisoft’s E3 2019 conference, Hocking was unusually vocal about Watch Dogs politically charged setting, given that Ubisoft execs have said that being overly political is “bad for business”. Hocking says that London has become a “surveillance state” and acknowledged Brexit’s impact, saying that “the causes of Brexit are the causes of the problems in our world”.

Although several of its features got leaked before E3, Watch Dogs Legion has announced some impressive game mechanics, like how you’ll be able to recruit and play as any of its citizens, including an old lady who’s a retired assassin, but beware, if you kill one of them in a mission they will stay dead with its permadeath feature.

Watch Dogs Legion is still several months away from its release date so until then study up on your London landmarks and start getting to grips with the tube map.