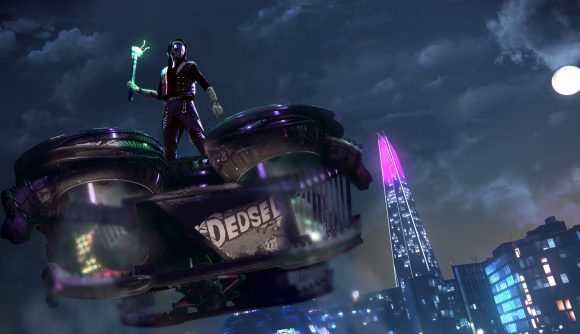 There’s a new minor patch available today for Watch Dogs: Legion that addresses a few remaining bugs in the hacking-focused open-world game. Most of the adjustments it makes are relatively minor, but it does make a potentially significant change to the zombie-themed Legion of the Dead mode. Specifically, you can’t use cargo drones in that game mode anymore.

Legion of the Dead is a survival game mode for Watch Dogs Legion that sets hordes of zombies loose on near-future London. To survive, you have to scavenge resources and raid caches guarded by Albion soldiers and Clan Kelley enforcers, all while avoiding getting chewed on by the undead population.

Here’s the thing, though: every time you start a new run, you get a random survivor who in turn has a random gadget. If this happened to be the cargo drone, as many construction worker characters have, you’ve got a massive advantage – you can simply call in the large quad-copter drone and ride it high above the bitey heads of all the zombies.

Well, no more of that nonsense, it seems. Title Update 5.6 removes the cargo drone from Legion of the Dead, so you’ll have to stick to sneaking through the streets and keeping your wits about you from now on.

DedSec, we are deploying Title Update 5.6 across today for all platforms. Check out the patch notes here!https://t.co/oUq4xty7F0 pic.twitter.com/iX7BJPOLJn

The patch also changes the minimum player requirement on Spiderbot Arena from four to two, so finding matches should be quite a bit quicker here on out. On PC, Ubisoft has addressed an issue that prevented players recruiting operatives who required them to have reached season rank 10 even if they already had unlocked that rank.

There’s also a fix for a crash that could occur under certain circumstances (although the patch notes don’t explain further) and added some missing highlights in the menu when hovering over certain options in the game menu.

The patch is available now on Ubisoft Connect and should weigh in at just under 26GB.