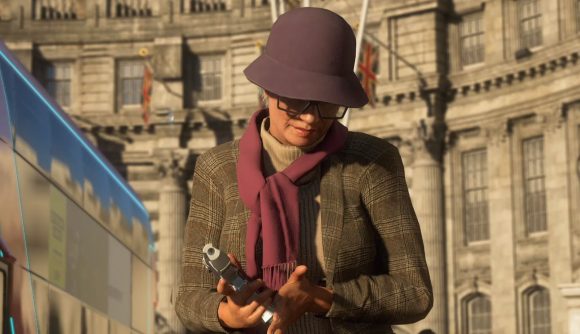 Gameplay footage of Watch Dogs legion at this year’s Ubisoft E3 conference has revealed that you can play as multiple cool characters – and one of them is an older lady who takes down her enemies with a taser.

The gameplay reveal for the game, which was shown off at the head of the conference earlier today, introduces permadeath via the unfortunate demise of Ian – one of the characters you can recruit and play as in Watch Dogs Legion. As Ian falls, the action moves to Helen, who, while appearing to be a kindly grandma-type, quickly dispells any myths about her abilities.

In fact, it’s not long before Helen is infiltrating police compounds with spider-bots and tasing guards. Sure, her parkour isn’t great, but she does a decent job for a pensioner, and when it’s time to get into a fight, she’s completely vicious. Seriously, there’s a moment where she wheels a guard round and shoots him in the face, point blank. In broad daylight. It’s pretty badass.

You can watch Helen in action from about 1:45 in the trailer below:

It’ll be a few months before you can take Helen for a spin – the Watch Dogs Legion release date is March 6, 2020.

Until then, however, you can join me in reveling in Ubisoft’s striking interpretation of London, which features iconic black cabs as well as a whole host of landmarks.