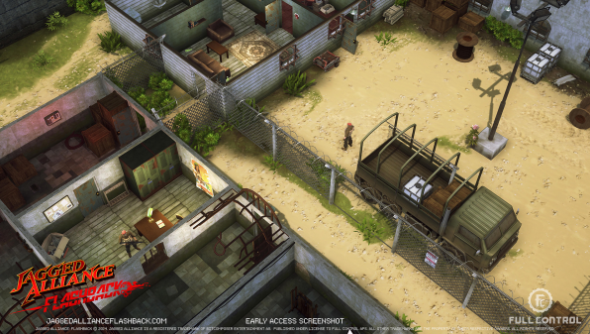 Full Control aren’t working on Jagged Alliance: Flashback right now – they’re busy piecing together their Space Hulk adaptation for PC. In fact, right now they’re not even doing that – today is a national holiday in Denmark. But the small studio has a Kickstarter to fund if they’re to make the sequel the Jagged Alliance games of old deserve, and so CEO Thomas Lund has come into the office to explain what the series is all about.

In the video below, Lund talks a bit about what he perceives to be the core values of the series, in front of what is unmistakably the same gigantic 40k Terminator spotted in this Space Hulk update. But we forgive him, because his love for Jagged Alliance flies straight and true throughout the 4:42 running time.

The Jagged Alliance: Flashback Kickstarter campaign is currently sailing at half mast* – about 45%, or $158,000 to be precise – with 14 days left on the clock. The team most recently recruited series veteran Chris Camfield as a consultant, and established a Modding Advisory Team.

“Their role will be to work with us to identify essential modding hooks, directory structure definitions, design the templates for modding files and some proof of concept tests,” explained the developers.

“Having these great modders on board gives us the ability to not fumble the ball on mod support, and will make it easier for everyone to later potentially port their existing mods.”

Hooray for that sort of thing. Have you pledged your name and cash to Full Control’s cause yet?

*Masts, as any seafaring person knows, are sewn together out of bank notes.