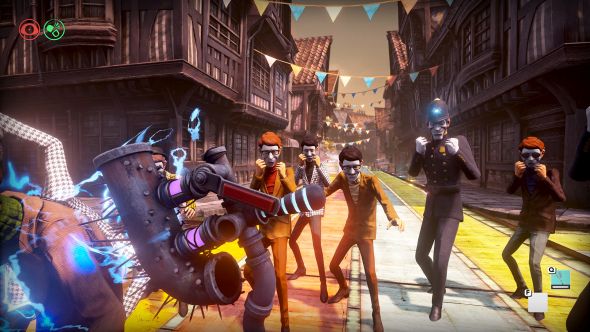 Ever suffered from impostor syndrome? The all-too-human feeling that you’re a fraud, merely mimicking the appearance of normal life, moments away from being found out? We Happy Few gets you.

“The whole faking it til you make it [thing],” laughs Compulsion Games COO Sam Abbott. “Our game is exactly like that, except there’s a very real threat of being smacked in the face with a truncheon.”

In the city of Wellington Wells the citizenry is kept drugged and happy, oblivious to the reality of the alternate ‘60s English hellhole they’re living in. Your continued existence depends on your ability to pretend you also haven’t noticed, offering up cheery hullos in the street for fear of being dubbed a ‘downer’ and, well, inviting the truncheons.

Though the game made waves at E3 with a linear sequence, which recalled the first-person derangement and daylight horror of Bioshock, We Happy Few is for the most part a freeform survival game navigated via a combination of sneaking, pugilism and social stealth.

Despite the jolly demeanour of its conformists, Wellington Wells’ society is “really just about to fall apart”. And once you’re off the Joy, the seroton-ish high that keeps the city just barely ticking over, you’re left to live between the cracks, attending to not only your basic needs but the expectations of each district. The behaviour you display and clothes you wear in one may get you in serious trouble in the next.

Gradually you’ll accumulate items, combine them to craft other items which help you subsist more successfully, and eventually grow ambitious enough to escape.

“We don’t really want you to run through the world beating everybody to death,” Abbott explains. “That’s not really the point. The point is this is a messed-up, broken society. It’s a bit like The Matrix – you don’t want to hurt anyone in the Matrix, but you kind of have to if you want to survive.” 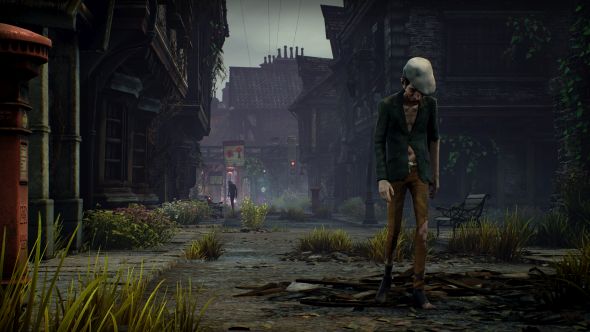 Working with Unreal Engine 4, Compulsion have constructed a gigantic procedurally-generated city, divided up into districts. That’s already in Early Access, and as the studio build towards 1.0 they’ll interweave the world with linear, scripted moments of the sort that wowed in the E3 trailer.

“It’s all completely exploration, there’s no map online,” says Abbott. “People will be able to give you hints and tricks, but they won’t be able to tell you the fast path. Likewise if you play it through a second time it’ll be different, but the core story will always be there – there’ll be big and small parts of the story dotted around the landscape.”

We’ll eventually play three different characters. The star of the E3 sequence is Arthur, a bureaucrat who works in the records department of Wellington Wells’ council, redacting unpleasant memories. He’s an obedient employee, but with a tragedy in his past so keen it cuts through the fug of Joy and leads him to go cold turkey, with life-changing consequences.

An absurdist poster on the wall of Arthur’s office reads: “It’s never too late to have a happy past”. Beyond The Matrix, Compulsion cite Terry Gilliam’s Brazil and a host of anglophile influences: Python, The Prisoner and Hot Fuzz. 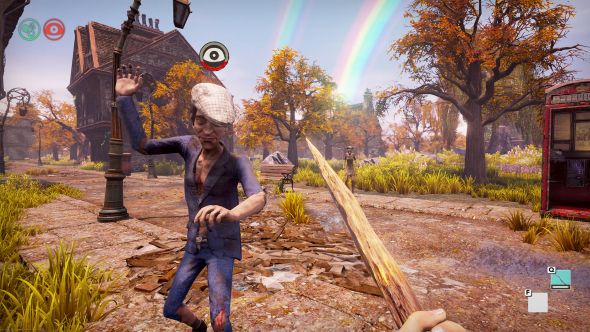 We Happy Few convinces, though, with an English whimsy that runs through every aspect of its city and populace. But one of its most pertinent themes is rooted elsewhere.

“Particularly in the US, the prescription drug culture,” says Abbott. “So the idea that, if you’re unhappy, just take a pill.”

The game’s also inspired by Facebook: the outward, false presentation of happiness encouraged by the big, blue social media giant. Denial is an option always open to you in Wellington Wells. Should the sneaking and struggle for survival get too much, you can always hop back on the Joy.

“The world suddenly becomes a bright, happy place,” describes Abbott. “You hear happy music, everyone seems friendlier, you walk with a spring in your step. Where, of course, it looks like England the rest of the time.”

In this sponsored series, we’re looking at how game developers are taking advantage of Unreal Engine 4 to create a new generation of PC games. With thanks to Epic Games and Compulsion Games.