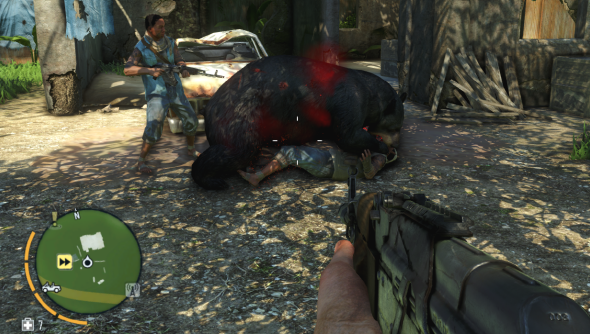 This week’s playlist has accounts of two of the PCGamesN staff standing up for what they believe in – their right to flee at a moments notice, leaving the dangerous work of gaming to their heavily armed NPCs/teammates – and the other find that there is a little place in his idyllic homelife for WarFace.

See what we’ve been up to this past week in the latest edition of The Weekly Playlist.

You’re never really safe, even when you’re deep within friendly territory, far within the areas of the island you’ve liberated. I’d popped back to one of the bases I conquered hours ago, just so sell off a few knick-knacks and buy myself a map, when suddenly one of the men stationed there yelled something about a bear. I don’t remember exactly what it was, something along the lines of “Look at that bear,” or “Look out, there’s a bear,” or maybe “Jesus Christ bloody bear argh oh God my face help me help me.” Then, there was a bear.

Far Cry 3 is a pretty ridiculous game. I’m not as excited about it as a lot of people seem to be and to me it’s more of a throwaway, very silly way to enjoy an evening, but I still enjoy it. As far as I’m concerned, it’s a first-person take on Grand Theft Auto, a big world I can drive about in, shooting, hunting and collecting, occasionally watching as the different factions and creatures in this silliness sandbox bump heads and start to shoot, chew or ram each other to death.

Apparently it also has a plot of some sort right? Yeah, sorry, I’ve not really noticed what’s going on with Far Cry 3’s story because I was too busy being ambushed by packs of dogs or set upon by tigers or punching alligators. “Coherent” is not really a word I’d associate with this game, it’s just an endless series of stuff that happens to you, chaotic, uncoordinated nonsense that’s ideal for dipping into for short shootouts between work. That makes it a pretty ideal game for what’s been a very busy week for me, as well as a fine antidote to all the headscratching I found myself doing during the ongoing March of the Eagles campaign with Rob. Seeing two players fire, miss, and then proceed to run about each other frantically swinging their knives is not a rare sight in One in the Chamber, the party game in Black Ops 2 which starts all players off with a pistol and only a single bullet. The only way to get more ammunition to score a kill, each kill gives you one new bullet.

Thankfully a successful hit is an instant kill, so you aren’t left only able to aim for the head, but it’s only when you have a single bullet that you realise quite how poor your aim can be. Frantically fire off a round and you more likely to go way over your opponents shoulder than get a killing hit.

The reason I’ve stuck with it over this past week is because of the ridiculous lunacy of the games. The game begins with a mad rush of everyone trying to get out of the open and into a space they can defend themselves better. Mind, with 16 players on the map and only so much space the first few minutes is a flurry of kills. In this early stage you’ll see players that have fired and missed being chased by players who don’t want to risk missing, only to then be gunned down by another player who was hiding behind a barrel. It’s madness.

As you only begin with three lives, soon the number of players on the map thin right out. At this point the game takes on a more tactical vein; trying to second guess your few remaining opponents, get the jump on them without putting yourself at risk.

Eventually you’re whittled down to just two players. At this point a spy plane is spawned so you can’t just camp and win with a sneak kill. No, you both know where the other is and have to go to each other. That final shootout is the closest thing to a contemporary Western standoff I’ve come to in a game. I said most of what I mean to about Crytek’s CoD-eater in our Warface hands-on earlier this week – until Western players get their mitts on it, at least – but didn’t touch on something I suspect might be key to its stated aim of becoming a truly social shooter – scalability.

Warface is powered by CryEngine 3, and can certainly be very handsome when it wants to be, in its rugged way. But it’ll also run on everything from a “moderate laptop” upwards – something I know to be true, because I’ve been running it on one all week.

It’s a matter of six o’clock realities, for me. That is, Warface is a game I can play when I clock off work. Mrs JP will be sat over the other side of the room, watching Kevin Spacey drawl malevolently through House of Cards or steering young Oliver around Ni No Kuni on the PlayStation, as she is right now. At six o’clock, the very last thing I’m going to do is disappear off into the study and boot up my work PC for another four hours. What I need is something I can drift in and out of on my laptop, as I do The Old Republic.

You won’t see any of CryEngine’s tessellated toads on a moderate laptop, but the game is never any less than readable, and I can even play it in Firefox if I want to keep an eye on Twitter or write the weekly playlist. Warface readily lowers itself to my early evening purposes, and retains its dignity and framerate in the process.