Weird West's isometric take on immersive sims might finally make me fall in love with the genre. I've tried before; in fact, I'm still trying – my playthrough of Prey's off to a promising start – but something's still not clicking for me, and Weird West has me thinking that something is literally a matter of perspective. Weird West takes the genre's willingness to say 'yes' to player agency, but unlike the majority of its peers, opts for an isometric view of the action instead of the traditional first-person perspective.

So what does that change? In theory, not a whole lot, but in practice this is the first immersive sim in which I can see strategies forming without having to save-scum my way towards understanding the level first. I can't tell you how many times I've sneakily darted up a wall in Dishonored 2 only to peep over the parapet and find myself face to face with a couple of guards. By contrast, you'll know where most guards are all the way through a level in Weird West. You know the rooftops are clear, you can watch the guard to your left and his colleague to your right simultaneously, and even when hunkered down behind cover you can keep tabs on the path ahead and move that way when it's safe.

The perspective change helps outside of stealth, too. When trying to storm a stronghold with guns and dynamite, you can linger behind a wall as an onrushing guard tries to get an angle on you, and peek out to shoot an oil lamp as soon as they pass it to set them on fire. Setting traps and baiting enemies into them is nothing new for immersive sims, but the isometric view makes it considerably easier to envision and then enact such ploys.

I wasn’t able to get my hands on Weird West, but the brief demo showcases a few promising ways you’ll be able to mess about with the environment and NPCs. Firstly, it appears there’s a Far Cry-like fire propagation system in place, so if you hurl an oil lamp at a stack of hay bales then the whole lot will go up in flames. If that fire then gets out of control you can boot a water barrel at it to extinguish the inferno. Ammo boxes react a little differently – throw one of these into a fire or shoot it from a distance and it’ll start pinging off bullets in random directions. 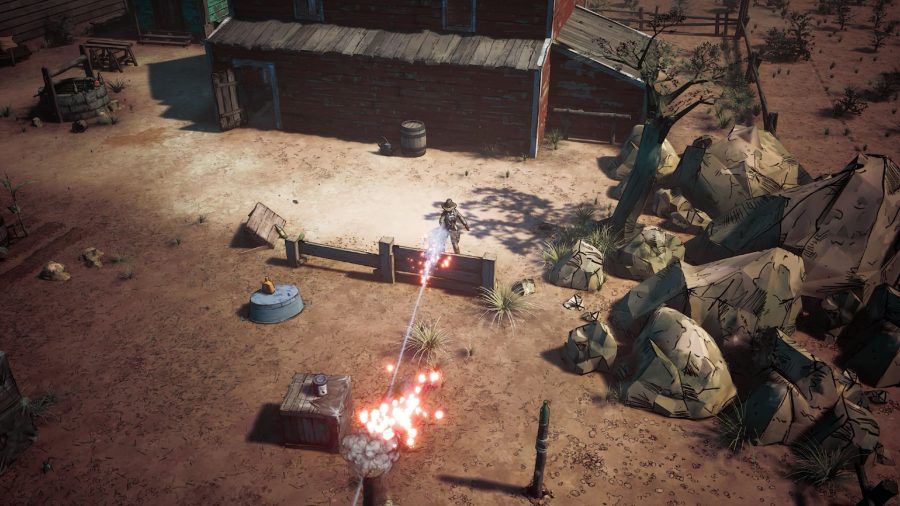 String it all together and you can lure a few guards into position with a small fire, then throw an ammo box into the mix and watch the fireworks. Perhaps one stray round hits the cart of dynamite nearby and wipes out half of the base. Even simple things, like picking up a barrel and placing it down to climb up to a new area, can be used to create dynamic, creative solutions on the fly.

Creative director Raphaël Colantonio says that while the switch changes how the studio has approached combat and level design, “the spirit, that matrix of possibilities going through the player’s mind, is the same. To us, immersive sims aren’t tied to a first-person perspective, that’s just the presentation, not the spirit under the experience.”

It’s hard to gauge how much abilities will play a role, especially as Weird West features five playable characters, each with their own set of skills. You don’t swap between these characters during the same playthrough either, instead you play through each character’s journey in sequence. The bounty hunter’s abilities mostly cover weapons, but can unlock a mightier, Dark Messiah-inspired kick, or the abilities to temporarily charm enemies, place shrapnel mines, or slow down time, which suggests you’ll be able to stage all manner of devious executions. 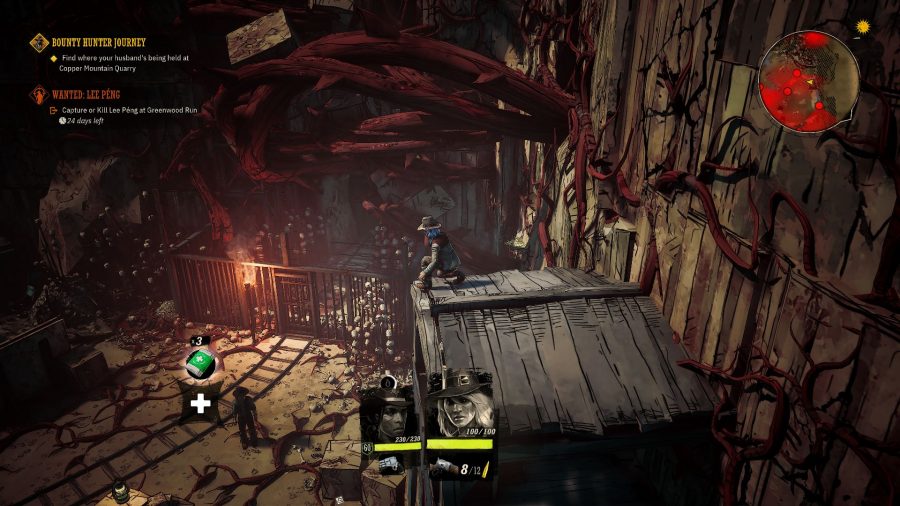 You can also unlock perks that persist over the course of the whole campaign. For the most part these bestow minor stat buffs, but there is one that extends the bullet time effect you get when you do a John Woo-esque dive, effectively letting you hang in the air for as long as it takes to fire every shot in your six-shooter and reload it.

We love kicking things, it's expressive

Between clearing out gang hideouts you can travel around the world via a zoomed out map that’s initially shrouded in fog. Clearly inspired by classic Fallout games, you use this map to navigate between points of interest, towns, and enemy strongholds, and you’ll occasionally get ambushed or stumble upon a random event.

This nod to classic Fallout extends to the first town we visit, a besieged, blighted frontier settlement called Grackle. Like the Boneyard or Junktown, you visit Grackle very much as an outsider; the townspeople have their own problems and preoccupations. There’s a main quest that brings you to Grackle, but once you’ve arrived you’re free to wander into any building, talk to its inhabitants, and pick up side quests. Alternatively, you can shoot the place up, turning everyone hostile against you. There’s a fun twist in that the state of the world is persistent across the entire campaign, so if you slaughter everyone as the bounty hunter you might return to find a ghost town later on. 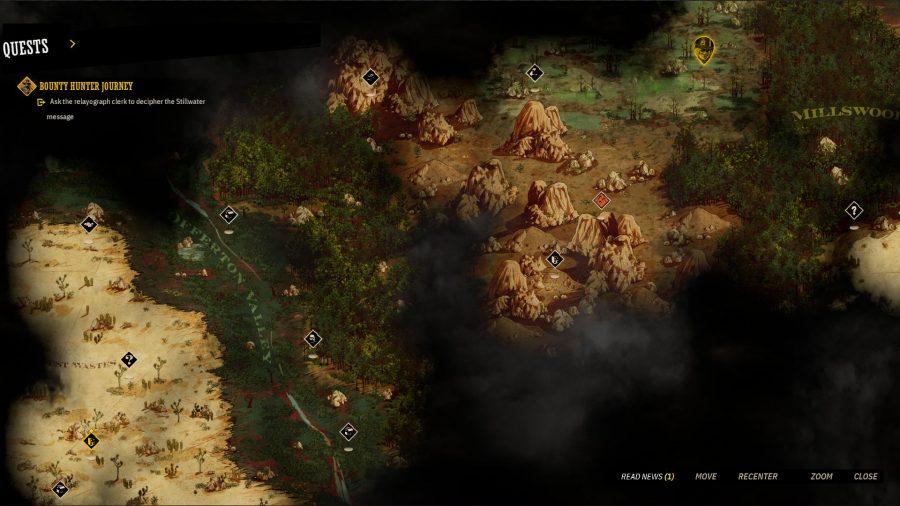 Those specks of RPG DNA are reflected in developer Wolfeye Studio’s own assessment of Weird West, which it places between Skyrim and Arx Fatalis on its continuum of the immersive sim genre, with open-ended gameplay and a much more open structure than games like Dishonored and Bioshock. It’s worth pointing out that Wolfeye’s 25-person dev team consists of 15 former Arkane devs, many of whom have worked on Prey, Dishonored, Arx Fatalis, and – as evidenced by the bounty hunter’s kicking prowess – Dark Messiah. “We love kicking things,” Colantonio says. “It’s expressive, what can I say?”

It’s too early to tell just how far players will be able to push Weird West’s world and mechanics, but from an early glimpse I’m excited to start messing around in one of its outposts.

Weird West is set to release in late 2021. You can check out some of the immersive sims mentioned above by grabbing Game Pass for PC, or you can pre-order Arkane’s Deathloop here. We’ll have to wait, but it’s already looking like a great fit for our roundup of the best Western games on PC.