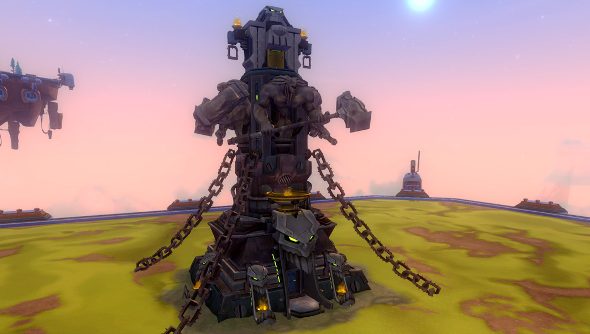 With WildStar heading towards a free-to-play future – the F2P beta is live now – Carbine have created a new loyalty program, Cosmic Rewards, to encourage players to spend money while also rewarding players who have already invested in the game.

Here’s how it works: if you spend money in WildStar, you get points that increase your Cosmic level, eventually unlocking a bunch of rewards that range from pets to new houses like the intimidating one above. Making purchases in the WildStar store and in the upcoming in-game store will net you points.

The good news is that it’s retroactive. So, for instance, if you’re currently a subscriber, when the game makes the shift to F2P, you’ll have a nice stack of points waiting for you.

The bad news is that, while most of the rewards are new things and bonuses, a few of them appear to unlock things that subscribers now already have, like full guild and war party access, implying that – like too many MMOs that don’t start as F2P – free players will have some features removed or limited.

Still, the program itself seems to be mostly positive, encouraging and rewarding players who are happy to spend a bit of money, as well as those that have already been playing. There often isn’t much of an incentive to spend cash on F2P MMOs, and the stipends that come with optional subscriptions are frequently measly.

Carbine hosted a Reddit AMA earlier today, so if you’ve got any questions about the system, you might find your answers there.