Wolfenstein: The New Order may have felt a world away from Wolfenstein 3D, but it was still mostly set in the same country. Machine Games is moving away from Germany for Wolfenstein II: The New Colossus, however, and we got our first taste of Roswell’s surprisingly festive streets in a recent hands-on. It’s a refreshing change of scenery, certainly, but breaching the US is much more than that for the team at Machine Games.

Bone up on Wolfenstein II: The New Colossus’s arsenal in our weapons guide.

“It was one of the first things we thought about when we pitched the [reboot] to id Software originally,” creative director Jens Matthies tells us. “Before us, Wolfenstein was always during the war; it was a World War II game, and we wanted to move beyond that. We had that idea of ‘what if the Nazi’s won the war through technology?’ As we were brainstorming, we were already thinking about what the US would look like, and how the Nazis would subvert American culture from the time.”

It turns out Nazi-occupied America would look quite a lot like Fallout. The confluence of Americana and retro-futuristic sci-fi in The New Colossus makes that difficult to avoid, of course, but it was hard not to notice the similarities when the reveal trailer was shown at E3 this year. Whether it’s chunky versions of recognisable vehicles, floating drones, or green-screen CRT displays, Matthies is well aware of the potential overlap. 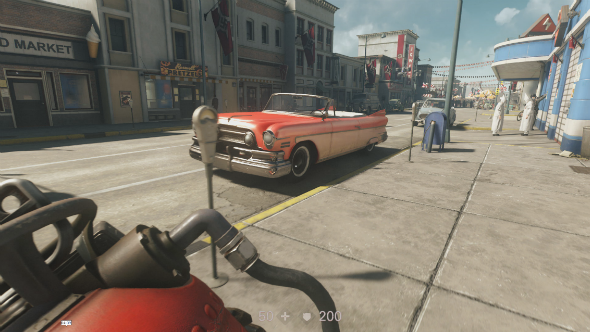 “It is a very hard thing to avoid because we’re doing retro sci-fi in the 1960s and the [Fallout team are] doing this retro sci-fi sort of projection of 1950s sci-fi,” he says. “Conceptually, those two looks are similar, but we do whatever we can to distinguish ourselves because, in the same way we don’t want any of our characters to overlap, we also don’t want the game to look like Fallout. But because of the nature of the situation that you are in, having these ’60s Americana-style objects in the world, there will just have to be some similarities in certain nooks and crannies.”

The New Colossus certainly has its own flavour, however, and the ‘60s is a potent era to distort. The Civil Rights Movement, Woodstock, The Beatles and The Stones – what if it all happened differently? “The cultural boom that happened in the US and UK and that spread all over Western civilisation, more or less,” Matthies says. “When you’re thinking about how the Nazis would subvert that, those ideas naturally emerge in your mind.”

While Machine Games have been itching to send Joseph ‘B.J.’ Blazkowicz to the US, any such excursion couldn’t have been squeezed into The New Order, according to Matthies. “We wanted to do it properly,” he says. “It couldn’t just be a mission, it had to be what the game is about. So as we were making the first one, we were hoping we would get to do a second one because that’s where we planned to cash in all of those ideas. It’s very gratifying to be able to do that.”

During the demo, we spent a good chunk of time in underground bases and on a huge military train, but the most memorable part of our experience was wandering around the streets of Roswell just taking in the atmosphere. There were moments like this in The New Order, of course, but this feels far more developed. It begs the question: can we expect a different pace to proceedings this time around? 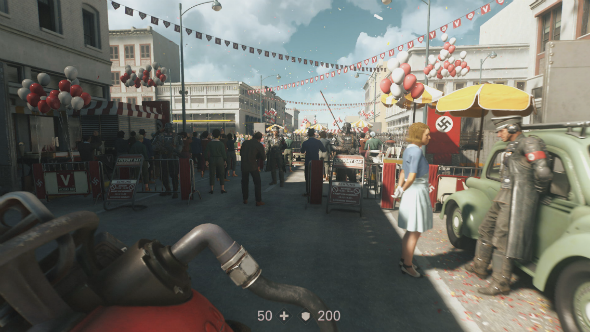 “It’s hard to say,” Matthies muses. “You can’t really quantify that until you have all the pieces in place. It’s always on a conceptual level at the beginning, where we sit down as a group and map out the game. Then [during development] we move a lot of those parts around.

“But in some ways this game is opening up a little bit, in terms of gameplay. I don’t think it’ll feel like a drastically different experience, though. We feel that Wolfenstein should be kind of what we aredoing. We don’t feel like we should turn it into an open-world game or anything!”