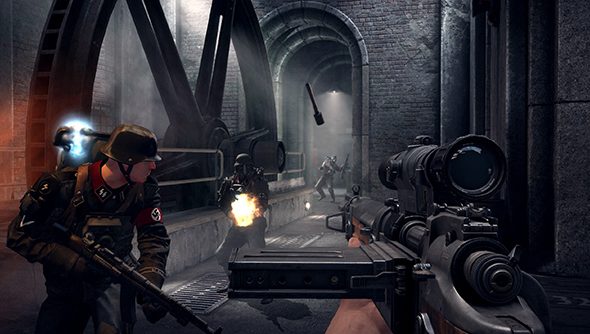 Hot on the heels of an hour-long gameplay stream, Bethesda have just released a new trailer for Wolfenstein: The Old Blood that gives you a taste of what the new Castle Wolfenstein is all about, and what particular brand of slaughter B.J. Blazkowicz will be perpetrating on the Nazis he finds there.

They’re definitely playing up the B-movie camp with this outing, and I’ll confess to having misgivings about the news that you’ll be fighting the undead in The Old Blood. My Nazi-zombie needs have been pretty well satisfied.

Still, I like the crude Nazi tech on display in this game, and how it locates the game as a prequel to the high-tech nightmare vision we had in The New Order. And I loved The New Order, so I’m willing to trust MachineGames’ vision for this expansion. Plus, Steve fell in love with what he saw.

The trailer also explains that The Old Blood is really two separate stories: “Rudi Jäger and the Den of Wolves” and “The Dark Secrets of Helga Von Schabbs.” Those titles are quite a mouthful, and a bit purple of prose, but I suspect that’s all in keeping with the pulpy vibe of the game.