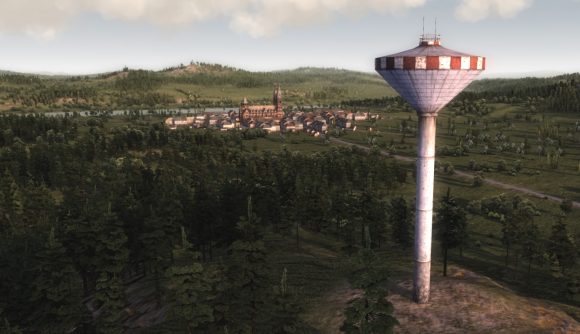 Workers and Resources: Soviet Republic is secretly the best city-building game out there, as long as you’re the kind of person who enjoys setting up gravel conveyors, placing railway signals, and keeping tabs on your citizens through a secret police network. Developer 3Division keeps adding complexity to it, and an upcoming patch will include a water and sewage system.

The latest Report for the Community includes some details about how the plumbing system will work. Naturally, you’ll first need a water source, such as a well. This water needs to be piped to a treatment facility, which will make it safe for drinking by adding chemicals to it. The amount of chemicals you’ll need to purify the water depends on where the source is – wells in heavily polluted areas will require more purification than well water from cleaner areas.

3Division says it’s already worked out how Workers and Resources will handle things like water pressure and delivery, and that now the studio is figuring out exactly how the water system will connect to the power grid and what kinds of values will be used to determine water consumption.

Initially, water and sewage systems will only be required for residential structures, but 3Division says it hopes to incorporate industrial buildings into the system as well at some point.

Each new system added to Workers and Resources increases the number of failure points, which effectively means that the game has continuously gotten more difficult. That’s something 3Division acknowledges, and it says players can expect another jump up in difficulty when the water and sewage update arrives.

First, however, is the crime and justice system, which should be arriving in the next patch. It’ll be interesting to see how that interacts with the secret police and citizen loyalty systems that were added last year.