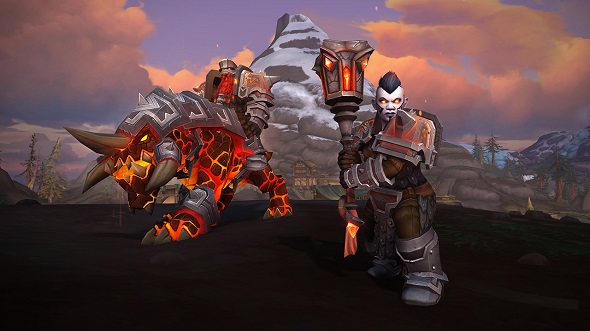 Update, April 28, 2018: Blizzard have provided some official information on the Dark Iron Dwarves and the Mag’har Orcs, two new races coming to World of Warcraft that are currently playable in the Battle for Azeroth beta.

A preview published today on the official World of Warcraft site gives a bit of background on both races, plus some of the racial traits they’ll have available to them.

The Dark Iron Dwarves have a contentious history with other dwarven clans and themselves are split in loyalties. Their racial traits include:

Mag’har is the orcish word for “uncorrupted,” and the Mag’har Orcs once united under Grommash Hellscream in a pledge to repay Azeroth’s heroes in the war against the Burning Legion. Their racial traits include:

You can read the whole post over at the official World of Warcraft site.

Here’s everything we know so far about Battle for Azeroth, all in one place.

Original story, April 21, 2018:The newest beta build for World of Warcraft’s upcoming expansion Battle for Azeroth opens two of its races, the Dark Iron Dwarves and the Mag’Har Orcs, and adds a host of other new content.

WoWHead has also discovered the schematic for a new mount, the Mecha-Mogul Mk 2.

The flavor text for the engineering mount says the new design “addresses an embarrassing security flaw” with the Mk 1, which could be blown up with a remote detonator.

Four new dungeons are opened up in the new build, namely the Temple of Sethraliss, Waycrest Manor, Shrine of the Storm, and The Underrot.

Build 26476 adds a ton of new items and models, plus changes to several spells. You can check out the rundown on the datamined info over at MMO Champion. Battle for Azeroth will officially launch August 14.