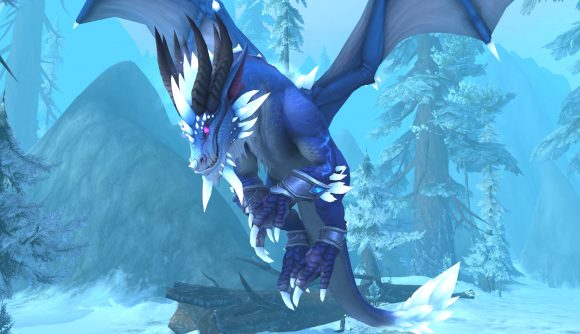 The WoW: Dragonflight story aims to be a return to the more traditional types of adventures that brought players into World of Warcraft in the first place. That was the message in yesterday’s expansion reveal, and game director Ion Hazzikostas has given a bit more detail on what that means. In short, the WoW universe is still full of cosmic threats – you should just expect them to take a backseat in the MMO‘s story for now.

“Part of the challenge of going to a place like the Shadowlands is the high concept nature of it,” Hazzikostas tells us during a roundtable interview. “Cosmic forces have always been part of the Warcraft universe – there have always been titans in a pantheon, cosmological forces at play, and light versus void.

“For many players, though, what drew them into World of Warcraft and what kept them there is going through Elwynn Forest and dealing with Gnolls that are marauding there. You know, facing Onyxia, dragons, and core high fantasy concepts. That’s, without question, what we are aiming to return to with Dragonflight.”

Hazzikostas notes that all this is “not to say that there won’t be cosmic adventures in the future and that we don’t still live in a world and a universe full of these great threats. But, at its core, this is adventurers of Azeroth going to a place full of mystery and intrigue, full of familiar faces and foes from centaurs, to Gnolls, to our friends, the Tuskarr. It’s also a whole new world of threats – massive giants, primal dragons that were a different path that dragonkind could have taken had the outcome of the fight against Galakrond been different, and more. It’s an exciting story that doesn’t require you to have played Shadowlands or have had familiarity with Shadowlands to understand it. We think it will be a great time for new and returning players alike to check out World of Warcraft.”

Sign-ups for the Dragonflight beta are live, though there’s no clear indication of when to expect the expansion’s release date. We do already know a fair bit about the Dracthyr Evoker, a new combo of race and class that’ll be landing with Dragonflight.