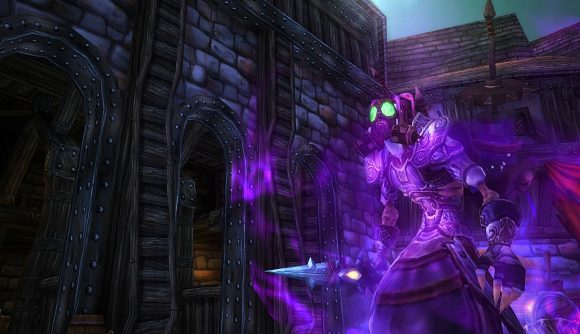 Some of World of Warcraft’s rarer mounts could soon be easier to obtain. In response to some ongoing player frustration over the X-45 Heartbreaker’s reportedly low drop rate in this year’s in-game Valentine’s Day event, a Blizzard developer has agreed that the general holiday mount grind doesn’t make for a “great experience”. The team is considering changes, though you shouldn’t expect them to be implemented before the current Love Is In The Air holiday event ends.

“I’ve done the event a dozen times a day on my characters before in previous years and probably would be doing it again this year if I didn’t have other real-life stuff going on,” WoW dev Chimes says. “Right now, if you want to maximise your chance of getting the mount, it’s in your best interest to repeat this event every day on as many characters as possible. That’s mathematically correct, but not a great experience.

“We hear this frustration and the good news is that we’re discussing this issue amongst the team and evaluating possible solutions for holiday events in general. The bad news is that even if we do end up making changes, they wouldn’t be in time for this year’s Love Is In the Air holiday event.”

Wowhead points out that the X-45 Heartbreaker is currently the rarest drop-rate mount in WoW, as it has a reported 0.03% chance to appear in a limited-time dungeon. You can’t simply keep running the encounter, though, so each character only has 15 attempts at getting it each year. You could make more characters, though they would need to be maximum level to potentially earn the mount, so it would certainly be a grind.

In other news, WoW’s Eternity’s End update launches on February 22. We’re also getting cross-faction play, though that won’t be here in time for the next big update.

For more of the best MMORPGs on PC, you can follow that link, or you can check out some of the best WoW addons if you’re looking to improve the UI, questing, and more.