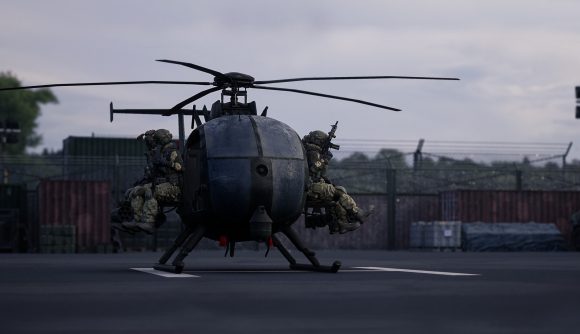 There was a time when the third-person military shooter ruled consoles, and SOCOM led the charge on the PlayStation. The genre mostly lives on with Ubisoft’s The Division and Ghost Recon series, but an indie developer is hoping to crack the market with Zero Six: Behind Enemy Lines.

DSO Gaming spotted Zero Six, which is being developed by a small German studio, and the game will reportedly feature both a single-player campaign and competitive multiplayer modes. From the little information provided on the official site, it sounds as though Zero Six will be played primarily from a third-person perspective, switching to first-person to allow aim-down-sights.

The developer says Zero Six is built in the Unreal 4 engine, and the website includes several pieces of art. Some are clearly renders and concept art, but at least one looks like a gameplay screenshot, which shows a player’s first-person perspective while firing a pistol in what appears to be an urban combat training facility in a warehouse. Zero Six will also feature dynamic time of day and a destructible environment as well.

The renders are impressive, but at this point, they’re just renders – it’s impossible to really tell much about how the moment-to-moment gameplay will actually feel, or how the game will eventually look. Fortunately, the developer is currently accepting alpha sign-ups, and if you provide your email (through Mailchimp) you’ll be eligible for a key that lets you into the test period.

There’s no specific date set yet for the Zero Six alpha test, but the developer plans on holding it sometime in 2020.