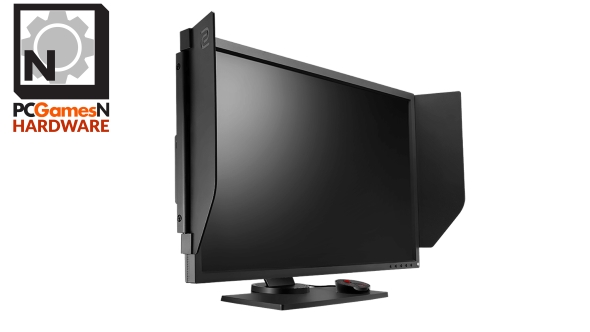 Zowie have become the eSports brand for display manufacturers, BenQ, and that union has brought forth this speedy gaming monitor. But they’re asking a lot for a screen with some smart gaming tech but an otherwise weak TN panel. Now why does that seem familiar…

After a quality monitor? Check out our pick of the best gaming screens around.

Asus also went down this route with their ROG Swift PG248Q, a surprisingly good gaming monitor that almost made me not hate its restrictive TN panel. Their justification for going TN was because of the 1ms response rate you get from this panel technology, potentially making it more valuable to hardcore gamers than the superior image quality of something like an IPS or VA panel.

The $699 (£640) Zowie XL2735 makes that same bold claim, pitching itself as a high performance gaming monitor ‘to arm you for competition.’

Skip to the end? If you have no time for words you can use the quick links below to jump to the verdict and all-important score. 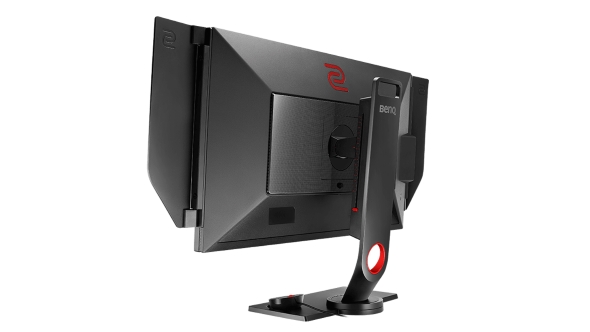 That 144Hz refresh is by no means the highest around. Our current pick as the best gaming monitor, the Asus PG279Q, has a 165Hz refresh, the PG248Q sports a 180Hz refresh and I’ve been recently testing the 30-inch Acer Predator ultrawide Z301C, which runs at a heady 200Hz.

The XL2735 though has a host of bespoke features, not least of which is their Dynamic Accuracy (DyAc) technology. It’s a bit of tech exclusive to BenQ and Zowie which reduces motion blur and allows the screen to remain clear while you sweep around for targets.

Because it’s using the same chassis and electronics as BenQ’s existing monitors, the XL2735 is also compatible with the S Switch. It’s a little breakout box for the panel’s on-screen display (OSD) and the simple mousewheel-a-like controls makes quickly switching profiles easier than ever. It also contains its own memory so you can program in up to three discrete profiles to action at the press of a button. BenQ’s controls and displays have long been the best in the business, so it’s good to see them translating over to the Zowie brand too.

There is an elephant in the room, however. Yup, those frickin’ ears. The Zowie’s Shield flaps attach to either side of the monitor giving you an adjustable way to block out anything which might intrude upon your gaming experience. Gaming blinkers, essentially. They’re much like the shrouds professional monitors sometimes come with, except without the cover across the top of the screen to block out unwanted light from above. 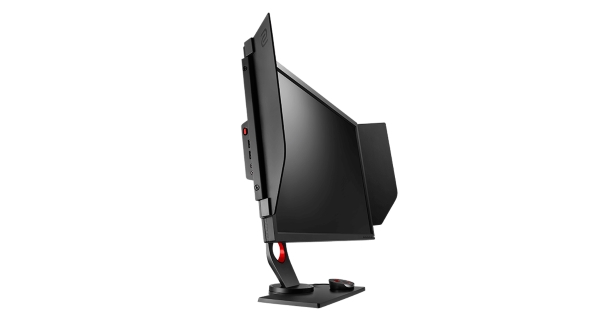 The in-game performance of the Zowie XL2735 is pretty impressive. The Dynamic Accuracy feature, coupled with the screen’s 144Hz refresh rate, make gaming a beautifully smooth experience. In the frantic, first-person action of Battlefield 4 the image remains clear even if your mind is fraught and, in the fast-paced multiplayer world of FIFA 17, the players and the motion of the ball are all smoothly represented too.

That said I did notice some slight ghosting behind the players in FIFA, which didn’t disappear in either the Gamer or FPS modes. In fact the Gamer mode made the gameworld even more washed out than I would normally expect of a TN panel. The image quality was markedly better running the screen in its Standard setting.

But if you care a jot about image quality you’re not going to be spending the $699 (£640) BenQ want you to drop on the XL2735. This is a panel purely designed for those who do literally nothing else with their monitors other than gaming. Though, outside of eSports arenas, I’m not entirely sure those people actually exist.

The problem is that this TN panel is not even a particularly good one. The Asus PG248Q has a better version; though still washed out it’s not as faded as the XL2735’s. The black levels are knocked out as soon as you switch to the Gamer or FPS modes, though they do seem to help the atrocious white saturation by knocking back the brightness from its Standard 100% levels.

And because it’s got the usual terrible TN viewing angles there is an obvious discolouration at the edges of the display when you’re looking at solid colours. Even though it’s just 27-inches across the diagonal that’s big enough for the viewing angles to become an issue at the limits of the screen. 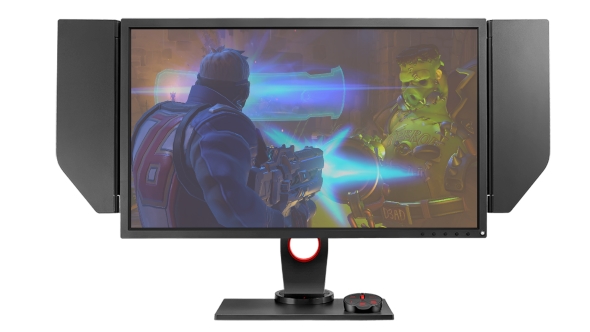 Even if you were the sort of ultra competitive gamer who travels to competitions with their own display, I still couldn’t really recommend getting the XL2735 as your go-to gaming monitor. It may be able to show some techie imaging skills when it comes to gaming, but as soon as you do anything else with your PC you’ll want to bleach out your eyes. The terrible white saturation means that on a normal bright desktop or web page you’ll lose a huge amount of detail and the washed out colours just look a bit sad.

If you absolutely, positively, must have a 1ms response time for your gaming monitor then the Asus PG248Q is a better, cheaper option. It may be lower res, but this isn’t about image quality is it? If speed in-game is more important than a decent picture, a picture that doesn’t look so faded that you could be viewing it through a net curtain, then I guess there are still reasons to specifically go for a TN monitor. But personally my old man’s eyes really aren’t good enough to tell the difference between IPS 4ms and TN 1ms response time, nor have I gaming skills where it would make a difference.

Panel aside the XL2735 would be a decent gaming monitor, with its broad feature set and exclusive technologies. But it’s the panel you’re going to be staring at for entire time you’re using it, making that the most important part of the package.

And the beauty of the PC is that it’s such a versatile machine. Sure, we’re PC gamers, but most of us don’t just game on our rigs, some of us might even read things. I know you do. But trying to do so with XL2735 is a frustratingly unpleasant experience – made even more infuriating by the knowledge you could buy the incredible Asus ROG Swift PG279Q for only a little bit more.