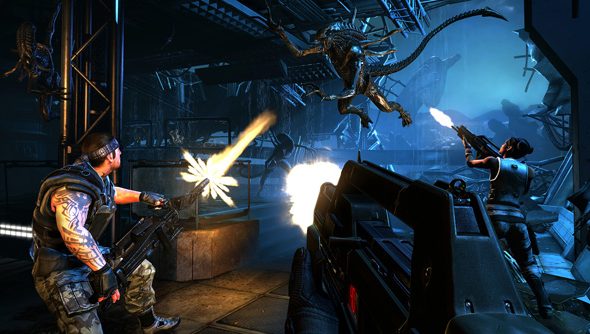 Before we kick off our best games of 2013 awards, we thought it would be a bit of a larf to take a look at the real stinkers. And, despite 2013 being a pretty good year; there have been plenty.

So buckle up. Here are the biggest disappointments and failures of the year, best left untouched by even with the longest barge poles.

Oh, Gearbox, Gearbox, Gearbox. When you work on your own projects, we get Borderlands 2. Other licenses? Duke Nukem Forever. This. As a supposed in-canon sequel to Aliens, it’s bad. What’s really sad though is how far it ended up being from the pre-release footage that got fans so excited, with even Gearbox king-of-spin Randy Pitchford struggling to find a positive one on it. He eventually found it by only retweeting scraps of positive tweets, and declaring “As a glass-half-full kind of guy, I only want positive feelings with my personal Twitter. Thanks for understanding!”, which didn’t exactly cheer up gamers who still remembered him originally saying things like “The biggest advantage this game gets, because it’s Gearbox Software building it, is we’re not settling, you know?” Not settling earned Aliens a whopping Metascore of 45, and a reputation as one of the biggest disappointments of the year. Thank goodness they didn’t just phone it in, eh? Poor Rebirth. You should have been so good. We were even willing to give you the customary few months everyone who’s ever played an Egosoft space game kinda expected it would take for you to reach your full potential. But no. The relaunch should have breathed all new life into the series instead resulted in stillbirth – a game far too happy to sacrifice the things that made it great in the hope of appealing to a wider market doomed to reject it. It’s a largely unplayable, buggy, and worst of all boring mess of a game that splits its failure between a terrible story mode and free play that feels like it should be paying you to endure it. Even if the bugs are eventually fixed, it’s hard to imagine the design decisions that make it so poor being dealt with with anything less than a complete do-over. Sure, we’ve got both Elite: Dangerous and Star Citizen on the way, and they’re both looking great, but this was 2013’s big hope for the space trading genre. It deserved better. So did we. So did the once proud X series. Back in 2012, a game called Orion: Dino Beatdown landed with what can best be described as a sad little splutter. As a multiplayer horde mode with dinosaurs, the idea had some merit. As a mod alpha, it might have been vaguely interesting. As a game with a pricetag, not so much. Luckily, Orion: Dino Horde took that, and helped it evolve into something far more involved, attractive, and… well, at least the title was different. In fairness, it’s been updated a few times since then, but still manages to be a bigger pile of poo than either the one in Jurassic Park, or indeed the movie version of Jurassic Park: The Lost World. There are too many multiplayer games worth playing out there for anything but the best to compete, so it’s not too big a surprise that this hasn’t. Still, the Orion series has another chance coming – a sequel announced for 2014. Uh. Glee? More like This. While technically scraping in at the end of 2012, it wasn’t really until 2013 that anyone played it – at the start of what would turn out to be a pretty good year for card games, with Hearthstone and Card Hunter especially kicking it physical style. This attempt… didn’t exactly start things off well, combining erotic incompetence with strategy in a way that just ends up being duller and more confused than a porcelain fetishist with a sudden attraction to dirty tupperware. The basic ideas behind it aren’t horrible, but fail utterly to bring a thoughtful edge to things or make the attempts at interpersonal relationships they represent more than a distraction to the promised smut. You may as well just download some sleazy Strip Poker game as endure it, or check out something like Gone Home if it really is the idea of unusually presented romantic elements that attract instead of the hope of maybe seeing some boobies for playing your cards right. 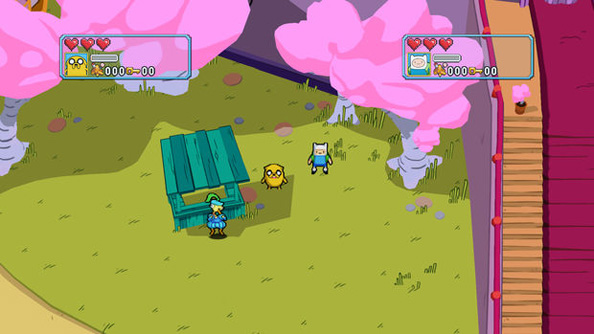 Adventure Time: Explore The Dungeon Because I DON’T KNOW!

What’s that? A retro themed roguelike based on the series that practically IS an old console game? Mathematical! Except no. If you grab your friends to go to these distant lands, they’re unlikely to ever talk to you again. You know you’re in trouble when the best thing about a game is a) its title or b) its uninstaller, and while this staggeringly tedious dungeon crawler goes for a twofer, that really doesn’t help. At the very least you’d expect that playing through it co-op would provide some laughs, but Adventure Time somehow manages to take the rule that everything’s fun with friends and break it hard over one knee. The best you can expect is a little shared sympathy and surprisingly few laughs, not entirely unlike a clown’s funeral. Even in a world without Telltale’s masterful adventure take, Survival Instinct would have been a worthless addition to the current glut of zombie games. Next to it though, it’s more of a festering corpse than its own zombies. It could have been cool, challenging us to make it through an infested slice of America with the help of some characters from the TV show and serving up a mix of stealth and action – a mix of Oregon Trail and survival horror. But no. What we actually got was one of the dullest apocalypses on record, whose few good ideas are soon dragged into mediocrity just like a victim being swallowed up by the ravenous horde. Except that generally we can feel some sympathy for them, instead of seeing their demise as a mercy killing. Forget this one ever happened, and look forward to Series 2 of the real Walking Dead game… right now! Embarrassing. Barely playable. Shameful. But you don’t have to take our word for it! Ashes Cricket 2013 was deemed so bad and so damaging to its own name, that publishers 505 Games recalled it just a few days after release. Let’s repeat that. The game wasn’t cancelled. It wasn’t shelved. It was actually released, only for the head of 505 Games to apparently get a visit from Jacob Marley and the three spirits of Crap Games Past, Present and Yet To Come and decide to just fess up and give everyone their money back. Wow. A polite round of applause for that, though only a small one, since it should clearly never have been released in the first place, and it feels a little bitchy that the press release announcing this new evolution in failure made a point of pinning all blame on the developers. We’re pretty sure there’s enough to go around on this one… Well, it sounded good on Kickstarter, at least. While the released version stands as a good example of how hard it is to make a great modern RPG, this ended up hands down the least interesting epic quest of the year. Failing miserably at world design, basic systems like loot collection and even combat, and landing about as polished as the average alpha the best thing you can say about Dogends Of Dawn is that very occasionally it aspires to adequacy and almost reaches it. It’s not impossible to make a good RPG on a small budget, as Jeff Vogel’s Spiderweb Software repeatedly demonstrates. When it goes wrong though, you get this – a game that mistakes ‘being hardcore’ for simply ‘being boring and punishing to play’. Don’t fall for that nonsense. There are far too many RPGs actually worth your time, however long your hack and slash legacy. Originally The War Z, in a painful attempt to hook onto the success of DayZ, this one manages to be one of the worst games of both 2012 AND 2013. So, that’s something to be proud of, probably. Originally pulled from Steam for being released staggeringly unfinished and living up to about as many promises as a ‘Hollywood Movie Producer’ in a bar full of doe-eyed starlets, it returned earlier this year to give every other zombie game something to look down on. Its grip on the genre so poor that it broke its own sense of scavenging and survival with an in-game cash shop, its groaning carcass still somehow lumbering around in the hope of eating peoples’ brains despite anyone with them actively steering as far away as possible, the best you can say for it is that at least the hackers got to have some fun with it. On the plus side, we doubt that the upcoming standalone version of DayZ will have too many problems with its continued existence. Well, half right. If you want a game to take you to Hell, this is arguably the best game of the year. Only crazy masochists need apply though, with a refund the closest you’re going to get to payback on everyone responsible. What was originally promised as a sprawling open world experience that would do to bikers what GTA did to car-thieves ended up hacked and broken up into an unfinished, buggy, sexist mess where women exist purely to transmit new brawling techniques through fully clothed sex, combat and driving both aspire to the dizzy heights of 1980s Atari games, and the supposedly gritty world soon ends up with all the biker cred of an accountant on a brand new Vespa. It’s so bad, it almost finds new life as one of the funniest games of the year, but don’t take that as a recommendation. The joke will only be on you, like some evil, sentient, pustular boil that takes great delight in constantly exploding its poison into your food. Bon appétit.